Sensational!  Spectacular!  Scintillating!  And no, I’m not exaggerating in writing down my impressions of Ring of Fire: The Music of Johnny Cash, which opened recently in the Milwaukee Repertory Theater’s Stackner Cabaret for a lengthy run stretching now through May.  In fact, I may run out of adjectives to describe an electrifying portrait of the country music superstar – told solely through more than two dozen hit tunes – who is commonly called “The Man in Black.”

And while there were black times in Cash’s life, his unique music – and the astounding way it’s performed here – reminds us of what his Mama once told him: Good came come out of adversity if you’re willing to keep your faith in the Lord.  And this is exactly what separates Ring of Fire: The Music of Johnny Cash from Walk the Line, the Joaquin Phoenix-Reese Witherspoon movie which zeroed in on the hard times of Cash’s life.  Here, that life – about family, death, love and rowdiness, with all its twists and turns – is instead celebrated through song.  Ring of Fire is like finding a silver lining in a gray cloud. 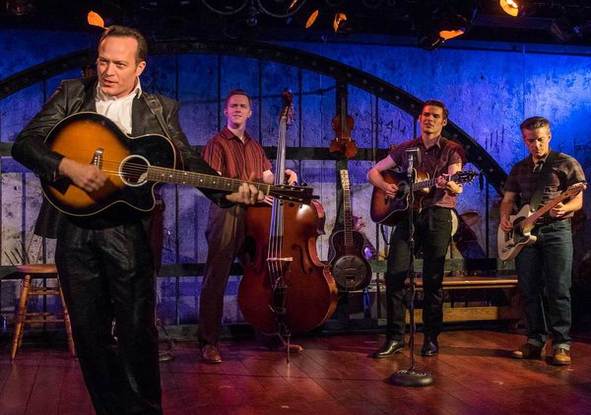 A multi-talented cast of five that redefines excellence dives with pure gusto into the iconic Cash songbook.  Alex Kelper as Mama Cash, Cash’s first wife and his second bride, June Carter; Kent M. Lewis as the older Cash and Corbin Mayer as the younger Cash, and James David Larson and Paul Wyatt won over an enthusiastic opening-night crowd by pouring their hearts and souls into a bevy of Cash classics, including “Cry, Cry, Cry,” “Get Rhythm,” “Folsom Prison Blues,” “I Walk the Line” and “A Boy Named Sue.”

Lewis, as the older Cash, tells us that when a musician hits the road, he ends up hurting the love he leaves at home, which is what led to the breakup of his first marriage and to the song “I Still Miss Someone.”  We also live through the floods of the 1930s with “Five Feet High and Rising,” which injects humor into a catastrophe, and are taken through the tragic death of Cash’s young brother with a moving “Sweet Bye and Bye.”  Cash and June Carter first meet at the Grand Ole Opry, then later fall in love, recalled through lively renditions of “Ring of Fire” and “Jackson.”

Kelper, as June Carter, teamed with either Mayer and Lewis, playing the younger and older versions of Cash, respectively, create an irresistible chemistry on stage.  And the transition between Mayer and Lewis, from the younger to the older Cash, is seamless, and astonishing to witness.

Ring of Fire: The Music of Johnny Cash is ablaze with amazing vocals, dazzling instrumentals and inspired storytelling.  It’s a show that should not and cannot be missed.