Thornton Wilder’s Our Town typically makes the distinguished list of “Greatest Plays Ever” by magically weaving a simple yet powerful tale about ties that bind us together as a community, the journey we take from adolescent love, marriage and to our final resting place, and to those things we unfortunately take for granted.  Although it made its debut in 1938, Our Town retains a potent timelessness that was evident in a beautiful and touching production by the Milwaukee Repertory Theater, the finale of its current season in the Quadracci Powerhouse.

Before seeing Our Town, a drama about life in Grover’s Corners, a mythical small town in New Hampshire, I envisioned a man in the role of stage manager, a central character in the play who breaks down the proverbial fourth wall and invites us in for a peak at the residents of his town.  I also saw George Gibbs and Emily Webb, the teenagers who fall in love and marry, played by blond, blue-eyed actors – you know, those all-American types.  But when I saw this staging of Our Town my stereotyped thinking was swiftly shattered because the Milwaukee Rep breathes new life into an American classic with innovative casting that is thrilling and refreshing. 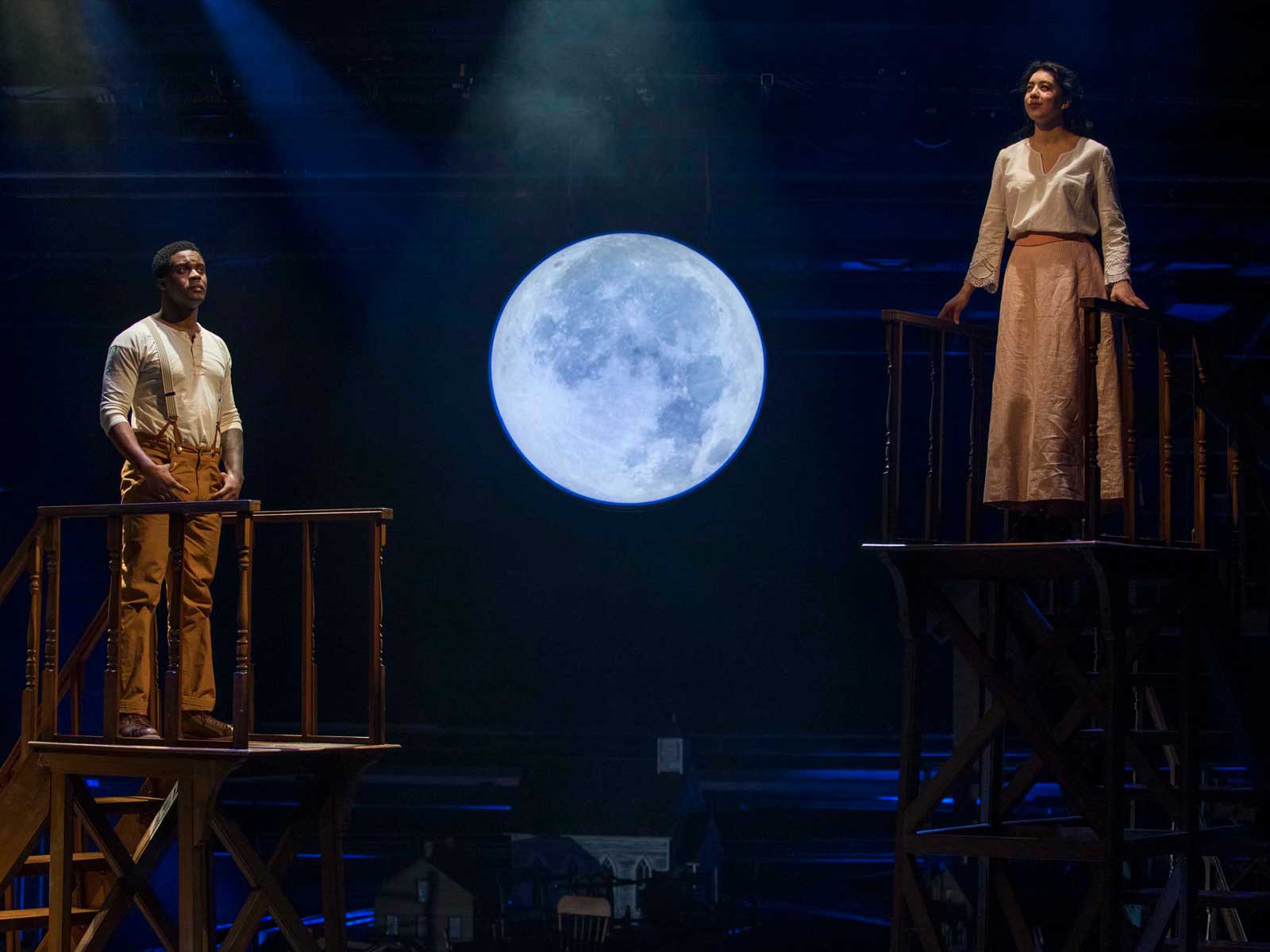 The stage manager is a woman dressed as a man, smoothly played Rep veteran Laura Gordon; George Gibbs is brought to life by actor DiMonte Henning, a man of color, and Cher Desiree Alvarez, an actress of Hispanic heritage inhabits the role of Emily Webb.  Both Henning and Alvarez are convincing as young lovers with the world at their feet – well, for a time, anyway.   Another character I originally envisioned as a man, Professor Willard, is hilariously played by Milwaukee native Carrie Hitchcock.  By diversifying the cast, director Brent Hazelton and his crew have proved that the characters and themes of Our Town transcend time and racial divides.

Our Town is broken down into three acts.  In Act 1, “Daily Life,” we see a brisk portrait of small town life, followed by Act 2, “Love and Tradition” which is both funny and touching, thanks to a talented cast of pitch-perfect actors.  But both of these acts are a prelude to what’s coming in Act 3, “Death & Eternity.”  However, in this production of Our Town, we’re keenly forewarned of the dark side of our journey on Earth because Acts 1 & 2 are played out against a bare-boned set with a black backdrop.  And it is through this very blackness that comes an invaluable lesson that each of us can take to heart right this minute as living human beings.  Kudos to scenic designer Scott Davis for imagining a set that plays such a key role in the overall production, particularly in the final – and crucial – graveyard scene.

This highly-original production of Our Town runs through May 13 in the Milwaukee Repertory Theater’s Quadracci Powerhouse, located at 108 E. Wells in downtown Milwaukee.  For tickets visit www.MilwaukeeRep.com or call (414) 224-9490.