Multi platinum selling, two time Emmy-nominated and five time Grammy-nominated entertainer Michael Feinstein sings his way onto the Auditorium Theatre of Roosevelt University (ATRU) stage September 29 at 7:30 p.m. Considered one of the premier interpreters of American standard songs and dubbed “The Ambassador of the Great American Songbook,” Feinstein unites with Jeff Lindberg’s world-renowned  Chicago Jazz Orchestra to delight audiences and take them on a journey through some of the most beloved music of our time. Tickets ($32 – $92) are on sale now and are available online at ticketmaster.com/auditorium, by phone (800.982.2787) or in-person at the Auditorium Theatre Box Office (50 E. Congress Parkway).

“Michael Feinstein not only sings the legendary classics of our American Songbook, he is a legend in his own right,” said ATRU Executive Director Brett Batterson. “Combined with one of the greatest artistic institutions inChicago under the helm of Jeff Lindberg, Michael and the Chicago Jazz Orchestra will treat audiences to a night of pure musical pleasure and fill the Auditorium Theatre with the music that has shaped the popular song today.”

Feinstein’s repertoire spans decades of some of the most beloved classics engrained into the American Songbook and this special Chicagoengagement will pay tribute to some of the greatest legends of our time. As a special preview of his new book and album “The Gershwins and Me,” Feinstein will perform the beloved melodies of George and Ira Gershwin. “Love is Here to Stay,” “Someone to Watch Over Me” and “Embraceable You,” are just a few of the timeless standards that will imbue the Auditorium Theatre. Feinstein will also honor the legendary Frank Sinatra as he features selections from his Grammy Award nominated CD “The Sinatra Project” and it’s follow up “The Sinatra Project, Volume II – The Good Life” with thrilling staples like “Luck Be a Lady,” “Come Fly With Me,” “Witchcraft,” “The Way You Look Tonight” and more. Combined with the finesse and brilliant styling of the CJO, these musical masterpieces are brought to life for one night only in a thrilling journey through the golden age of song. For more information, visit auditoriumtheatre.org.

“The excitement of performing inChicagowith the greatest jazz musicians in a swinging band, plus great acoustics in a beautiful hall will for me, be the thrill of a lifetime. I can’t wait to get there!” said Feinstein. 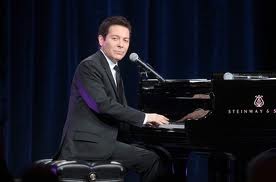 Dubbed “the Ambassador of the Great American Songbook,” Michael Feinstein is considered one of the premier interpreters of American Standards. The multi platinum-selling, five time-Grammy nominated entertainer’s 200-plus shows a year include performances at Carnegie Hall, Sydney Opera House, the Hollywood Bowl as well as The White House andBuckinghamPalace. Introduced to the legendary Ira Gershwin at an early age, Feinstein became Gershwin’s assistant for six years where he not only honed his musical skills but earned access to numerous unpublished Gershwin songs, many of which he has since performed and recorded. Feinstein has received National recognition for his commitment to celebrating America’s popular song and has gone on to found the Michael Feinstein Great American Songbook Initiative dedicated to celebrating the art form and preserving it through educational programs, Master Classes and the annual High School Vocal Academy and Competition, awarding scholarships and prizes to students across the country. Michael also serves on the Library of Congress’ National Recording Preservation Board, as Artistic Director of the Center for Performing Arts inCarmel,Indiana and as the Director of the Jazz and Popular Song Series atNew York’s Jazz atLincolnCenter. Feinstein has participated in various television specials including “The Sinatra Legacy” currently airing on PBS and “Michael Feinstein’s American Songbook” which will return to primetime in February of 2013.

His albums have gone on to receive critical acclaim including USA Today’s “10 best CDs of the Year” for “Only One Life – The Songs of Jimmy Webb.” His own record label, Feinery, a Concord records Subsidiary, records current artists and works to restore recordings and musical broadcasts from the golden age of popular song. Feinstein’s live performances, recordings, film and television appearances and songwriting, are all a true testament to his all-star force and commitment to American music.

The Chicago Jazz Orchestra, Chicago’s oldest professional jazz orchestra in continuous operation, is one of the most highly regarded orchestra’s by the finest musicians in the field. Led by Artistic Director Jeff Lindberg,  the CJO is constantly looking for new challenges – both in repertoire and stylistic choices –infusing their sound with a spirit of versatility that has made the CJO a favorite performer not only in jazz venues, but just about anywhere big band music can be presented. The CJO is the professional jazz orchestra of choice for nationally headlining soloists, performing with a luminous list of artists and touring Italy, Spain, Sweden, and Denmark. The CJO has performed 23 straight years at The Kennedy Center Honors in Washington, DC (December 2 will be their 24th straight performance at that event) and created a concert series that is the longest-running jazz orchestra concert series inChicago (13 years). Because the CJO has its own transcriptions of the original recordings and its own unique arrangements, much of the music presented by the orchestra at its performances cannot be heard anywhere else.

Subscriptions for the Auditorium Theatre’s 2012-2013 season and discounted tickets for groups of 10 or more are on sale. For more information or to purchase a subscription or group tickets call (312) 431-2357 or visit auditoriumtheatre.org.

Michael Feinstein with Jeff Lindberg’s Chicago Jazz Orchestra is part of ATRU’s Jazz Series    Subscription including “Too Hot to Handel: The Jazz-Gospel Messiah” (Jan. 19 – 20, 2013) and River North Dance Chicago with the Chicago Jazz Philharmonic‘s “The Cuban Project” (April 13,   2013). Save 20% by purchasing all three shows.

The Auditorium Theatre of Roosevelt University, located at 50 E. Congress Parkway, is an independent, not-for-profit organization committed to presenting the finest in international, cultural and community programming to Chicago, and to the continued restoration and preservation of the National Historic Landmark Auditorium Theatre. The Auditorium Theatre is generously supported by the Illinois Arts Council, CityArts, American Airlines and the Palmer House Hilton.  For more information about programming, volunteer and donor opportunities or theater tours, call (312) 922-2110 or visit auditoriumtheatre.org.