2004 proved to be a quite a year for Broadway musicals and the Tony Awards.  Though most industry people assumed that the juggernaught Wicked would take home the grand prize for Best Musical, it was in fact a bunch of racist, horny and sexually confused puppets (who closely resemble and sound like the creations of Jim Henson) from Avenue Q the upset the witches of Oz and took home the coveted award. It was later discovered why the show won, unfortunately having little to with merit but the politics of the touring market. Scandal aside, Avenue Q is a brilliantly structured show with music and lyrics by Jeff Marx and Robert Lopez and book by Jeff Whitty and is a very difficult musical to execute for a myriad of reasons.

For Mercury Theater’s new Broadway quality production, director L. Walter Stearns has created his best work to date.   With a cast that innately understands the actor/puppet relationship and a technical team that lets the show seamlessly unfold, this is a production that could run for years.

Avenue Q’s mojo comes in the same vein found in South Park/The Book of Mormon, where the underlying humor, no matter how crude, is based in truth.  The politically correct wall of our society is thus allowed to fall, as a mirror (albeit a furry one) is held up to our  society.

Here, Princeton, a recent college graduate with a useless BA in English, is trying to find his life purpose and through his foibles and follies, including some invasive Bad Idea Bears, the other furry and not so furry residents on the block are able to find new meaning in their lives.

Mr. Stearns casting is impeccable, led by Jackson Evans who gives his Princeton the perfect balance of puppet and human qualities to which gets to the meat of the material.  Leah Morrow is equally as good as Kate Monster and brings the house down with her rendition of “It’s a Fine, Fine Line”, which is the best number in the show. 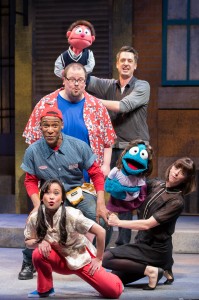 Hang on, a Bad Idea Bear is at my door with some scotch.  I’ll be right back with more of this review.   Whew, ok, that was refreshing.  Anyway, Thom Van Ermen had the audience pissing their pants as Trekkie Monster, Donterrio Johnson resurrected Gary Coleman  (if only Coleman had Johnson’s talent he would still be alive.); Daniel Smerilgio’s hilarious and hot Nicky proved that being Oscar Madison in a Felix world can only lead to an eviction without a 5 day notice and Stephanie Herman made for an amazing slut (Lucy that is).   Hmmm, that afternoon scotch the Bad Idea Bears just brought me was delicious.

For their human neighbors, it gets no better than Christine Bunuan as Christmas Eve who makes Sean Patrick Fawcett’s Brian all the more sympathetic.   Then there is Adam Fane whose crisp, funny and vocally limber performance and puppetry with Rob is better than the original Broadway creator of the role.

As stated, the technical side of this Avenue Q is near perfect as Russ Walko’s puppets come to life.  Kevin Bellie’s choreography nicely adds to the morphing of human and puppet while taking full advantage of the Mercury’s stage.  Alan Donahue’s scenic design is reminiscent of the original; and as usual, Eugene Dizon’s musical direction is spot-on.

For those that go to see Avenue Q, make it a point to look behind the humor.  If you do the true intent of the show will be apparent and you will see that we all indeed walk a fine, fine line.

Avenue Q plays through June 29 by Mercury Theater, 3745 N. Southport Ave., Chicago. Tickets are available by calling 773-325-1700 or by going to www.MercuryTheaterChicago.com. Additional information about this and other area productions can be found by visiting www.theatreinchicago.com.