“Men are from Mars, Women are from Venus Live” The Battle of the Sexes Continues 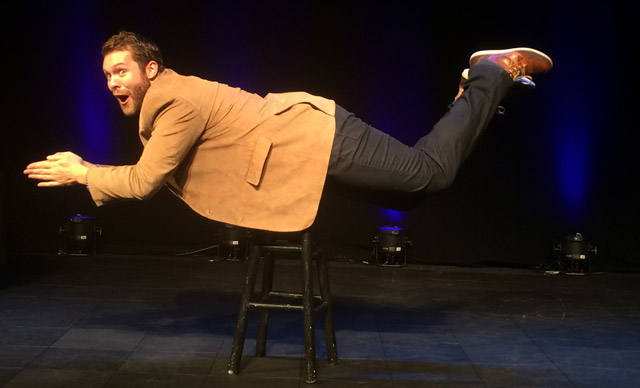 Throughout history, men and women have always been at odds defending their way of thinking, their ideas and their territory. In 1992, author John Gray wrote the award bestselling book, “Men are from Mars, Women are from Venus”. In his book, John Gray explores the differences between men and women by defining their characteristics by comparing men to Martians and women from Venus. Here are a few of the quotes from John Gray’s Book.

“Love brings up our unresolved feelings. One day we are feeling loved, and the next day we are suddenly afraid to trust love.
The painful memories of being rejected begin to surface when we are faced with trusting and accepting our partner’s love.”

Award-winning playwright, Eric Coble brings to the stage John Gray’s quotes through a one-man show at Chicago’s Broadway Playhouse.   Eric Coble further defines the comical reality of relationships and marriage through Brooklyn born actor Josh Hyman. Josh Hyman breathes life into this show by comparing the book to his life and marriage. Josh who married for 10 years, along with a daughter who is a toddler, humorously moves from his experiences with dating and marriage, to his relationship with his wife in the bedroom. Josh’s graphic descriptions include wonderful impersonations of his wife. His incredibly funny monologue creates a dynamic illustration of his life and coping with communication gaps with his wife. Using a clever video featuring John Gray, Josh continues to explain the differences between the sexes using animation. Josh Hyman continues his story, further explaining the point of the video through his life experiences. One example is where men believe that a grand gesture would earn them a lot of points with their partner, where women are only looking for many small gestures to earn more points. For instance: “ If a man presents his wife with a dozen roses where he believes that he would receive many points it would only earn him 1 point for the dozen roses. Women feel that if the man presents a single rose each day, it would earn the same point as a dozen roses. This means that the men could really get by with only one rose for the same point as the dozen.” Very funny!

The entire performance of “Men are from Mars, Women are from Venus” was very entertaining and humorous. Josh Hyman’s interaction with the audience had them identify with similar situations in their own lives with their life partners. Many times throughout Josh’s performance, the audience laughed at their own experiences. Josh connected and was very effective.

The thought that occurred in my mind during the entire performance of “Men are from Mars, Women are from Venus” was that this subject matter seemed very familiar. Then I remembered seeing the popular one man performance of “Defending the Caveman” some years ago. The concept and delivery were a little different, but the subject matter was the same. Men were identified as “Hunters” and women were identified as “Gatherers”. The main difference was the delivery in “Defending the Caveman”, was more laid back.

Josh Hyman’s delivery in “Men are from Mars, Women are from Venus” was energetic and exciting. Unfortunately, most of the time, Josh seemed to be very manic and nervous, with little variation to his voice or on-stage movement. Josh constantly moved from one end of the stage to the other creating a nervousness that I found unsettling. It really did not enhance his performance or the subject matter, and it transferred to the audience. Josh would have been more effective telling this story without some of his erratic movement and loud ranting. I would have liked to have seen Josh’s delivery laid back building to an excitement from time to time. This did not happen. However, I assume that this is more of a direction issue with Director; Mindy Cooper, rather than a reflection on Josh Hyman’s excellent performance.

That being said, I highly recommend “Men are from Mars, Women are from Venus” It is very entertaining and I believe that many couples will compare it with their own lives. It makes them look at their relationships and laugh. Even though, I have some concerns with Josh Hyman’s direction I believe that his performance is excellent and enjoyable.

“Men are from Mars, Women are from Venus Live” will run through February 21 at the Broadway Playhouse at Water Tower Place 175 East Chestnut Street. Performances are; Tuesday-Friday at 8:00 p.m., Saturdays at 2:00 and 8:00 p.m., and Sundays at 2:00 and 7:00 p.m. Tickets are available at all Broadway in Chicago Box Offices (24 West Randolph Street, 151 West Randolph Street, 18 West Monroe Street, and 175 East Chestnut Street), or the Broadway in Chicago Ticket Line at 800-775-2000, all Ticketmaster retail locations and on line at www.BroadwayInChicago.com.