The Museum of Contemporary Art Chicago presents Battlefield, an interpretation of the great Indian epic The Mahabharata by the internationally renowned team of Peter Brook and Marie-Hélène Estienne. Thirty years after director Brook staged the now-legendary production of The Mahabharata in New York, which ran over the course of nine hours, he now presents Battlefield, which focuses on the aftermath of the war described in the ancient Sanskrit text. Written by Brook’s longtime collaborative partner Jean-Claude Carrière, and refined to be presented in just over an hour, Battlefield confronts audiences with questions about family, war, and mortality in a way that is both contemporary and urgent. The timeless language of Battlefield has its origins in the past, but its themes provide insight and provoke reflection on the harsh conflicts of today. Co-presented with Chicago Shakespeare Theater, Battlefield runs from Wednesday, April 5, through Saturday, April 8, at the MCA Stage.

The Mahabharata – the world’s longest epic poem – tells the story of an apocalyptic civil war between rival members of the same family. Once the dust settles, remorseful Yudishtira, King of the Pandavas, sees millions lying on the battlefield and must find a way to rule over murderers and murdered alike. With the aid of the older blind King Dhritarashtra, who lost 100 sons, they question their past actions, trying to unravel their responsibility for the disaster and see what lessons can be learned. 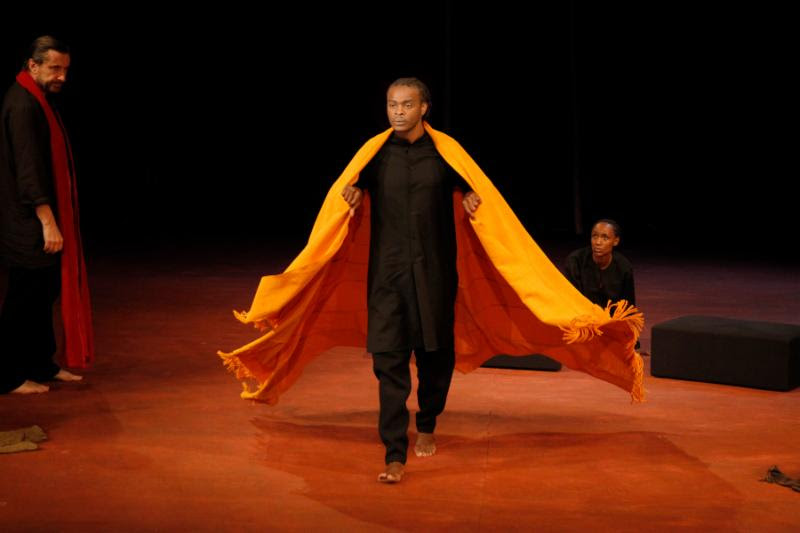 Employing four actors and composer Toshi Tsuschitori, who was a member of the original Mahabharata production, Battlefield uses simple means to tell the text’s unfolding stories, rooted in the cyclical self-destruction of war. Silk scarves become rivers and shrouds; the actors are reincarnated as worms and eagles, victims and perpetrators; and a single instrumentalist scores the bleak peace of extinction, giving haunting new life to this breathtaking Indian epic through dozens of African and Asian instruments.
ABOUT PETER BROOK
Born in London in 1925, Brook has distinguished himself in various genres throughout his career: theater, writing, cinema, and opera. A prolific director, he has staged over seventy productions in London, Paris, and New York, and in 1971 co-founded the International Centre for Theatre Research in Paris, where many of his plays were performed in both French and English. Brook’s autobiography, Threads of Time, was published in 1998 and joins other titles including The Empty Space (1968), The Shifting Point (1987), There are No Secrets (1993), Evoking (and Forgetting) Shakespeare (1999), and The Quality of Mercy (2013). His films include Moderato Cantabile (1959), Lord of the Flies (1963), Marat/Sade (1967), Tell Me Lies (1967), King Lear (1969), Meetings with Remarkable Men (1976), The Mahabharata (1989), and The Tragedy of Hamlet (2002, TV). His opera productions have been performed at Convent Garden, London; Metropolitan Opera House, New York; The Bouffes du Nord, Paris; and at the Aix-en-Provence Festival in France.
TICKET INFORMATION
Battlefield runs 70 minutes with no intermission and takes place at 7:30 pm Wednesday, April 5, through Friday, April 7, with 3 pm and 7:30 pm shows on Saturday, April 8. Tickets for the performances are $40 and are available at the MCA Box Office at 312.397.4010 or www.mcachicago.org. ASL interpretation is offered at the performance on Thursday, April 6.
Image: Peter Brook, Battlefield, Photo: Pascal Victor/ArtComArt.
Lead support for the 2016-17 season of MCA Stage is provided by Elizabeth A. Liebman. Generous support for MCA Dance is provided by David Herro and Jay Franke. Additional generous support is provided by Caryn and King Harris, Shawn M. Donnelley and Christopher M. Kelly, and Lois and Steve Eisen and the Eisen Family Foundation. The MCA is a proud member of the Museums in the Park and receives major support from the Chicago Park District. Season support is provided by Alphawood Foundation. MCA Stage is a proud partner of the National Performance Network.
The Museum of Contemporary Art Chicago is a nonprofit, tax-exempt organization accredited by the American Alliance of Museums. The museum is generously supported by its Board of Trustees; individual and corporate members; private and corporate foundations, including the John D. and Catherine T. MacArthur Foundation; and government agencies. Programming is partially supported by a grant from the Illinois Arts Council Agency. Museum capital improvements are supported by a Public Museum Capital Grant from the Illinois Department of Natural Resources. The MCA is a proud member of Museums in the Park and receives major support from the Chicago Park District. The MCA is located at 220 E. Chicago Avenue, one block east of Michigan Avenue. The museum and sculpture garden are open Wednesday through Sunday from 10 am to 5 pm and Tuesday from 10 am to 8 pm. The museum is closed on Monday.  Tuesdays are Community Free Days with free admission for Illinois residents.  Suggested general admission is $12 for adults and $7 for students and seniors. Children 12 years of age and under, MCA members, and members of the military are admitted free. Information about MCA exhibitions, programs, and special events is available on the MCA website at mcachicago.org or by phone at 312.280.2660.