In Rehearsal: Lyric Opera’s THE LIGHT IN THE PIAZZA Starring Renée Fleming

The production is directed by multiple Olivier Award-winning director Daniel Evans and features the Lyric Opera Orchestra under the baton of Kimberly Grigsby, conductor of the original Broadway production. Fleming and rising West End star Rob Houchen (Les Misérables) earned raves for their performances in The Light in the Piazza in LA and London, with Houchen receiving a BroadwayWorld UK Award for Best Supporting Actor in a New Production of a Musical. For this special Chicago engagement, they are joined by three-time Olivier Award winner Alex Jennings (Netflix’s The Crown) and rising star Solea Pfeiffer (Almost Famous, Hamilton).

Tickets for the limited holiday engagement of The Light in the Piazza at Chicago’s Lyric Opera House (20 N. Wacker Drive) start at $35 and are on sale now. For more information or to purchase tickets, visit www.lightinthepiazzathemusical.com.

In The Light in the Piazza, Margaret Johnson (Fleming) embarks on a fateful trip to Florence with her daughter Clara (Pfeiffer) in the summer of 1953. A gust of wind whisks Clara’s hat into the hands of local dreamer Fabrizio Naccarelli (Houchen) and it’s love at first sight—but Clara isn’t quite what she appears. Soon her mother is faced with a heart-wrenching decision, and they must all confront a secret that’s been kept in the shadows for far too long.

Based on the novel by Elizabeth Spencer, The Light in the Piazza book is by Craig Lucas, with music and lyrics by Adam Guettel. Scenario Two’s production of The Light in the Piazza is directed by Olivier Award winner and critically acclaimed musicals expert Daniel Evans and designed by Robert Jones, with costumes by Brigitte Reiffenstuel, movement by Lucy Hind, lighting by Mark Henderson and sound by Kai Harada.

Renée Fleming (Margaret Johnson) reprises her role in The Light in the Piazza after appearing in the production at LA Opera and London’s Royal Festival Hall. She is one of the most highly acclaimed singers of our time, performing on the stages of the world’s greatest opera houses, theaters, and concert halls. Winner of four Grammy® awards, and recipient of the US National Medal of Arts from President Obama, Renée has sung for momentous occasions from the Nobel Peace Prize ceremony to the Diamond Jubilee Concert for HM Queen Elizabeth II at Buckingham Palace. In 2014, Renée brought her voice to a vast new audience as the first classical artist ever to sing the National Anthem at the Super Bowl.

Renée’s schedule this season includes concerts in New York, Boston, Vienna, Paris, Hong Kong, and Beijing. Last summer, she performed the world premieres of André Previn’s Penelope and Kevin Puts’ The Brightness of Light at the Tanglewood Music Festival, going on to reprise Penelope at Ravinia.

Last spring, Renée appeared opposite Ben Whishaw in Norma Jean Baker of Troy to open The Shed at New York City’s Hudson Yards. She earned a Tony Award nomination for her performance in the 2018 Broadway production of Rodgers and Hammerstein’s Carousel.

Her new album, Lieder: Brahms, Schumann, and Mahler, was released by Decca in June. She was heard on the soundtracks of the 2018 Best Picture Oscar winner The Shape of Water and Three Billboards Outside Ebbing, Missouri, and she provided Julianne Moore’s singing voice for the film Bel Canto. As Artistic Advisor to the John F. Kennedy Center for the Performing Arts, Renée spearheads a collaboration with the National Institutes of Health focused on music, health, and neuroscience.

In 2010 she was named the first-ever creative consultant at Lyric Opera of Chicago. Among her many degrees is an Honorary Doctorate from Northwestern University, awarded in 2018, when she also delivered the commencement address. Other awards include the Fulbright Lifetime Achievement Medal, Germany’s Cross of the Order of Merit, and France’s Chevalier de la Légion d’Honneur. www.reneefleming.com

Rob Houchen (Fabrizio Naccarelli) reprises his role in The Light in the Piazza after appearing in the production at LA Opera and London’s Royal Festival Hall. He trained at the Guildford School of Acting. Rob’s work in theater includes, most recent­ly, Marius in Les Misérables: The All-Star Staged Concert at the Gielgud Theatre in London’s West End. He has also appeared as Eugene in The Eugenius! (The Other Palace), Gibran in Broken Wings (Theatre Royal Haymarket), Les Misérables 30th anniversary gala (Japan), Fleet in Titanic (Charing Cross Theatre), Marius in Les Misérables (Queen’s Theatre), The 12 Tenors (World Wide Events), Godspell in Concert (Lyric), the title role in Candide in Concert (Cadogan Hall) and the title role in Peter Pan (Harlow Playhouse). Television credits include Tony in West Side Stories: The Making of a Classic. Listen to Rob’s own music on Spotify & iTunes.

Alex Jennings (Signor Naccarelli) reprises his role in The Light in the Piazza after appearing in the production at London’s Royal Festival Hall. Alex is a three-time Olivier Award winning TV, film and theatre actor who has worked extensively with the Royal Shakespeare Company, the National Theatre and throughout the West End. His three Olivier Awards include Best Comedy Performance for Too Clever by Half (Old Vic), Best Actor for Peer Gynt (Royal Shakespeare Company) and Best Actor in a Musical for My Fair Lady (Theatre Royal, Drury Lane). His screen appearances include playing Edward VIII in the critically acclaimed Netflix series The Crown, Alan Bennett in The Lady in the Van and Prince Charles in The Queen, alongside his many television roles which most recently include Unforgotten (ITV), A Very English Scandal (BBC), The Halcyon (Left Bank) and Victoria (Mammoth Screen).

Solea Pfeiffer (Clara Johnson) most recently performed the role of Eva Peron in New York City Center’s revival of Evita and starred as Penny Lane in the musical adaptation of the hit film Almost Famous at The Old Globe. Past credits include the critically acclaimed run of Encores! Off-Center’s production of Jason Robert Brown’s Songs for a New World, and starring as Eliza in the West Coast premiere of Hamilton. Solea’s first job out of college was Maria in the LA Philharmonic/Gustavo Dudamel Hollywood Bowl production of West Side Story. She later reprised the role in Steven Reineke’s National Symphony Orchestra production at the Kennedy Center. On television, Solea recurs on The Good Fight and appeared in one of the final episodes of Scandal.

Scenario Two is a new UK company founded by John Berry CBE and Anthony Lilley OBE, which specializes in commercial theatrical production in London and internationally. It brings together the very best talent from the world of opera and musical theatre with top performers and creatives from other industries such as film, television and theatre. The company is creating exciting new productions of classic musicals and developing new commissions and thereby aims to attract both existing theatregoers and new audiences in the West End and major theatres around the world. For more information visit www.scenario-two.com. 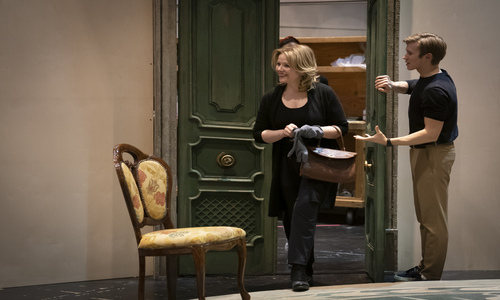 Renée Fleming and Rob Houchen in rehearsal for Scenario Two’s production of The Light in the Piazza at Lyric Opera House. Credit Liz Lauren 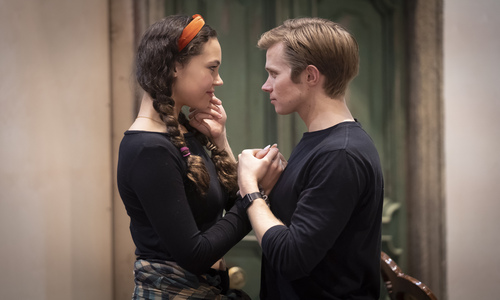 Solea Pfeiffer, Rob Houchen in rehearsal for Scenario Two’s production of The Light in the Piazza at Lyric Opera House. Credit Liz Lauren