Experience the soul, energy, and passion of Cuba this November, when the Auditorium Theatre welcomes Lizt Alfonso Dance Cuba for two performances of its vibrant program Cuba Vibra! on November 5 and 6. The company explores Cuban music and dance from the 1950s to the present throughout Cuba Vibra!, effortlessly combining cha-cha, rumba, Flamenco, conga, bolero, mambo, and more – all the rhythms that resonate with the heart and soul. A seven-piece band with vocalist will perform accompaniment right on the Auditorium Theatre’s historic stage alongside 18 dancers.

“I am thrilled to welcome Lizt Alfonso Dance Cuba to the Auditorium Theatre,” says Tania Castroverde Moskalenko,  Auditorium Theatre’s incoming Chief Executive Officer, who begins on October 3 and was born in Cuba. “As the company celebrates its 25th anniversary of presenting the vibrant culture of Cuba through music and dance, I am delighted that the presentation coincides with my arrival to the Auditorium Theatre. I can’t think of a more fitting welcome.” 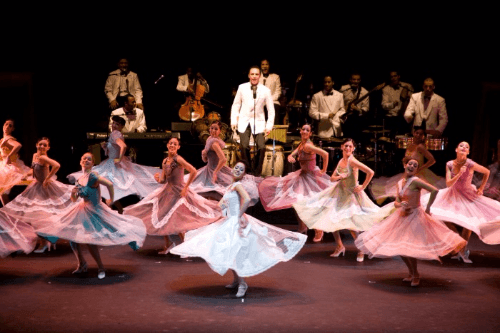 Lizt Alfonso Dance Cuba, which celebrates its 25th anniversary this year, has performed internationally including Beijing and Istanbul, and appeared onstage at the Latin GRAMMYs in Las Vegas in 2015. The company has also worked with Enrique Iglesias, who featured the group in his 2014 video for the song “Bailando” (the title translates to “Dancing”). The company’s last appearance in Chicago was in 2010, when they also performed on the Auditorium Theatre’s landmark stage.

“I am so excited to bring the company back to Chicago and back to the Auditorium Theatre,” says Lizt Alfonso, the founder and director of Lizt Alfonso Dance Cuba. “We look forward to telling the story of Cuban music and dance with the program Cuba Vibra!“

“All steps interlock in perfect synchronization.” – The New York Times

“Now is an ideal time to revel in the delights of a hot Havana night as this company brings its irresistible fusion of cha-cha, rumba, conga, bolero and mambo to the stage.”­ – Chicago Sun-Times

The 2016-17 Dance Series Sponsor is NIB FOUNDATION.  The presentation of Lizt Alfonso Dance Cuba is made possible through the generosity of DENISE LITTLEFIELD SOBEL. The PASQUINELLI FAMILY FOUNDATION is the gracious sponsor for the 2016 Fall Gala.

For tickets or tables to the 2016 Fall Gala on Sunday, November 6, which includes a ticket to the performance, please contact Kelly Saroff by calling 312.341.2364 or email ksaroff@auditoriumtheatre.org.

January 14-15: Too Hot to Handel: The Jazz-Gospel Messiah

About The Auditorium Theatre

The Auditorium Theatre, located at 50 E. Congress Pkwy in Chicago, is an Illinois, not-for-profit organization committed to presenting the finest in international, cultural, community and educational programming to Chicago, and to the continued restoration and preservation of the National Historic Landmark. In September of 2014, the Auditorium Theatre was awarded the inaugural Fifth Star Award by Mayor Rahm Emanuel and the Chicago Department of Cultural Affairs and Special Events.

The Auditorium Theatre 2016-17 Season is made possible in part with support from the MacArthur Foundation, the Illinois Arts Council and the Palmer House Hilton. For more information about programming, volunteer and donor opportunities or theatre tours, call 312.341.2310 or visitAuditoriumTheatre.org. For a complete listing of events at the Auditorium Theatre, please click here.