Lifeline Theatre’s KidSeries presents The Mystery of the Pirate Ghost

Lifeline Theatre’s KidSeries presents The Mystery of the Pirate Ghost, a children’s play based on the book by Geoffrey Hayes. The production is adapted by Scott T. Barsotti (Resident Playwright at Chicago Dramatists, company member of WildClaw Theatre and Curious Theatre Branch, and artistic associate of Collaboraction), and directed by ensemble member Paul S. Holmquist (Non-Equity Jeff Award nominated director). A burglar is at large in Boogle Bay and the prime suspect is none other than the ghost of the infamous pirate Blackeye Doodle. Hungry for adventure, young Otto and his Uncle Tooth set out to capture the mischievous thief and recover the stolen goods. But all is not as it seems, and soon Otto must reach out to a troubled outsider and help him learn the value of honesty and hard work. This heartwarming adventure for children ages 5 and up features music, swashbuckling, and spooky fun.  The production runs approximately one hour with no intermission and the book will be on sale in the lobby.

PLUS: Join Lifeline Theatre every Saturday and Sunday at 12 p.m. during the run of The Mystery of the Pirate Ghost (following the 11 a.m. show, or before the 1 p.m. show) for our Stories Come Alive! Hour. Children of all ages will get up close and personal with the book that inspired the play in an interactive storytelling session, followed by theatre games exploring the characters, plot, and themes of the play. The cost is only $10 per child. Reservations are encouraged, though not required. Contact the Lifeline Theatre Box Office at 773-761-4477 for more information.

The complete cast and production team for The Mystery of the Pirate Ghostincludes:

Lifeline Theatre also offers “Name Your Price” tickets a half-hour before the show (subject to availability), group rates and other discounts available upon request.  A party room is available for full-service birthday and special event parties.  Free parking is available at the designated lot west of the theatre (NE corner of Morse and Ravenswood) with free shuttle service before and after the show.  Street parking is also available and Lifeline Theatre is handicapped and CTA accessible (Red Line Morse stop/busses).

Now in its 30th season, Lifeline Theatre specializes in original literary adaptations. Its ensemble of artists uses imaginative, unconventional staging to portray sprawling stories in an intimate space. Lifeline is committed to promoting the arts in its Rogers Park neighborhood and is an anchor of the Glenwood Avenue Arts District.  We aspire to create art that is relevant to our culturally diverse, increasingly youthful neighborhood.  Lifeline Theatre – Big Stories, Up Close.

Founded in 1982, Lifeline is known for staging innovative adaptations of great works of fiction as well as commissioning original work. Over the course of thirty years and more than one hundred and fifty productions, Lifeline Theatre has made an indelible mark on the Chicago theatre scene and an invaluable contribution to the theatre world at large. Lifeline’s dedicated artistic ensemble has developed a total of one hundred world premiere literary adaptations and thirteen original plays, two dozen of which have had a life beyond their Lifeline premieres, with nearly one hundred and fifty subsequent productions spread across more than thirty U.S. states, four Canadian provinces, England, and Ireland. Additionally, two scripts developed at Lifeline Theatre have gone on to U.S. national tours, and nine have been published.

Lifeline Theatre has garnered a total of forty-eight Jeff Awards (Equity and Non-Equity), including fourteen for New Adaptation or New Work, and twenty-one After Dark Awards. The critics have said, “Few American theaters can do this kind of thing – with such imagination, dignity, humor and judicious restraint – quite like the master storytellers at Lifeline.” (Chicago Tribune, 5/12/10); and “Lifeline raises the bar on family theatre.” (Chicago Parent, 5/29/11). 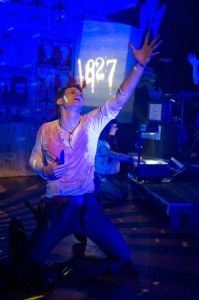