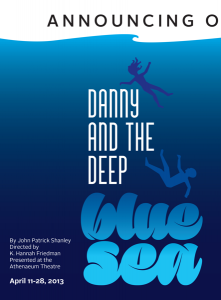 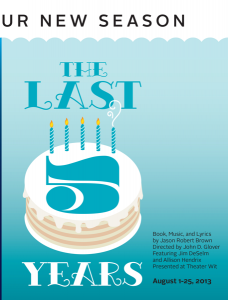 “I am thrilled to expand to a two-show season in 2013,” said producer Scot T. Kokandy. “After having great fun producing one show in each of the last two years, and enjoying a strong audience response to last summer’s “The Great American Trailer Park Musical”, I wanted to take a step forward in 2013. The two productions we’ve chosen artfully intertwine the intricacies of relationships, for better and worse, and combine to create a season that explores the hope of forgiveness and redemption in love.”

Friedman directs “Danny and the Deep Blue Sea” and will assistant direct “The Last Five Years”. Friedman has directed and devised performances in Chicago since 2010 with some favorites including “Occupy My Heart: A Revolutionary Christmas Carol” (Occupy Players) and “Letters Home”, a piece she is currently devising with Allison Hendrix. She is the Director of Community Outreach for Oracle Theatre and one of many co-facilitators in a “Theatre of the Oppressed” group.

Written by Jason Robert Brown, “The Last Five Years” premiered at Northlight Theatre in 2001; the subsequent 2002 Off-Broadway production received a Drama Desk Award for Outstanding Music and Outstanding Lyrics and was nominated for five additional Drama Desk Awards including Outstanding Musical. The piece explores the five-year relationship of Jamie and Cathy, the beauty and difficulty of balancing professional and personal passions, and the nature of love and loss.

John D. Glover (Director) returns to Kokandy Productions where he directed “The Great American Trailer Park Musical” last summer. He has directed for several regional theaters in Ohio and Indiana including the grand opening production of the Theatre at the Center in Munster, Indiana. Glover is the recipient of several awards by the Northern Indiana Excellence in Theater Foundation (NIETF) including: Best Direction of a Musical for “Pump Boys And Dinettes” (1993) at Purdue Theater Company and Best Direction of a Musical for “Floyd Collins” (2009) at the Towle Theater. In 1996, Glover received the NIETF Award for Lifetime Achievement in Regional Theater.

Kokandy Productions seeks to inspire its audiences by producing and presenting theatrical experiences while collaborating with like-minded playwrights, producers, artists, and theater companies. The premier project for Kokandy Productions was “Good Boys and True”, co-produced with the Towle Theater in 2011. Kokandy Productions was also part of the 2011 revival of “Godspell” on Broadway. “The Great American Trailer Park Musical” was produced in August 2012.

“Danny and the Deep Blue Sea”

For tickets visit the Athenaeum box office, at www.athenaeumtheatre.org or 773-935-6875or in person.

Brandon Galatz (Danny) began his performing career at an early age by singing and dancing in such plays as “The Magic Flute”, “The Wizard of Oz”, “Brigadoon”, “Babes in Toyland” and “Guys and Dolls”. He received his degree in theater and acting from the University of Iowa and continued his studies through Act One Studio’s Meisner Program. In addition, Galatz is also a graduate of “The Conservatory” at Act One Studios Chicago. Chicago theater credits include: Street Tempo Theatre’s “LaRonde”, Metropolis Theatre’s “Men Exposed,” the role of the President in Genesis Theatre’s “The “People’s Choice,” “Date Me!!” at Theatre Wit, Strangeloop Loop Shop’s “Shadows and Lust,” “1001” directed by Shade Murray, and “Blood Wedding” directed by Kimberly Senior, among others. Brandon can also be seen in Sole Production’s movie, “You Don’t Say,” and Julian Grant’s feature film “Sweet Leaf,” both premiering Spring 2013.

Jodi Kingsley (Roberta) was most recently seen as Cynthia in Rivendell Theatre Ensemble’s revival of “Wrens”, and prior to that as Chantal in “Smartphones” for Trap Door Theatre. Other local appearances include Seanachai, BoHo, Pride Plays, and Bailiwick, and she has worked regionally with Main Street Theater, the Houston Shaw Festival, The Actor’s Forum Los Angeles,and The HBO/WB Workspace. Her training includes The Conservatory at Webster University, Circle In The Square Theater School NYC, and The Acting Studio Chicago. She is co-Artistic Director of the DIVISION theater company, where she directed their debut offering, “Zastrozzi”, and will be directing their upcoming production of Caryl Churchill’s Romanian saga “Mad Forest”.