For Visual Aids 25th anniversary (2013), curated by Sur Rodney Sur in New York City, Karen Finley was invited to participate in the exhibit. While looking over and revisiting her art and writing on the subject and era, Finley gathered her poetic responses and realized that it became its own narrative, its own body of work. Sections of performance texts, poetry, letters and fragments express the loss and magnitude of personal suffering and compassion within a larger world of homophobia, denial and injustice. Some of these writings are those that were censored and considered indecent, bringing her and three other artists (Fleck, Hughes, Miller) to the Supreme Court.

Karen Finley brings her rave reviewed solo performance that explores the recent heightened U.S. political presidential landscape that takes on citizenship, gender disparity and abuse of power. The individual price of public relationships at the price of privacy becomes divisive with searing psychosexual dynamics of wit and seething revelation. The performance explores magical beings, aggressive thankfulness and collective intimacy through Shakespearean sudden trauma. This is an experimental nonlinear poetic text that creates a jolt of intuition, analysis and unnatural disaster of the human kind.

Karen Finley is a perform 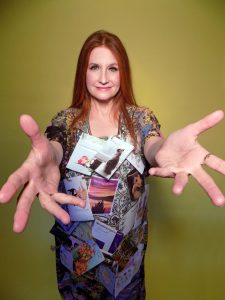 er, artist, writer, musician, poet, teacher and lecturer and is the recipient of two Obies, two Bessies and multiple grants from the National Endowment for the Arts (NEA) and New York State Arts Council (NYSAC).  Since her first performances in the early 198
0’s, she has become synonymous with performance art. She has toured internationally with pieces including Make Love, George & Martha, The Jackie Look, The American Chestnut, A Certain Level of Denial and The Return of The Chocolate Smeared Woman and Written in the Sand. In 1990, Finley became an unwilling symbol for the NEA when she, along with Tim Miller, Holly Hughes and John Fleck, sued the NEA for withdrawing grants on the grounds of indecency; the controversial case went all the way to the Supreme Court. Among Finley’s books include Shock Treatment, Enough Is Enough: Weekly Meditations for Living Dysfunctionally, the Martha Stewart satire Living It Up: Humorous Adventures in Hyperdomesticity, Pooh Unplugged and A Different Kind of Intimacy.

LookOut is Steppenwolf’s multi-genre performance series in the 1700 Theatre presenting work from a diverse array of voices, artists emerging and establishing alike. LookOut programming takes place in the 1700 Theatre, Steppenwolf’s new 80-seat cabaret-style venue situated behind Front Bar: Coffee and Drinks, a café & bar open daily from 7am to midnight. Tickets to LookOut programming in January and February are currently on sale. To purchase tickets or for more info, visit steppenwolf.org or 312-335-1650. Steppenwolf Red and Black Card Members may use credits towards any LookOut programming. Prices vary for each show. LookOut is presented year-round and announced on an ongoing basis. For information, visit steppenwolf.org/lookout.

Steppenwolf Theatre Company is the nation’s premier ensemble theater—redefining the landscape of acting and performance. Formed by a collective of actors in 1976, the ensemble has grown to 47 members who represent a remarkable cross-section of actors, directors and playwrights. Thrilling and powerful productions from Balm in Gilead to August: Osage County—and accolades that include the National Medal of Arts and 12 Tony Awards—have made the theater legendary. Steppenwolf produces hundreds of performances and events annually in its three spaces: the 515-seat Downstairs Theatre, the 299-seat Upstairs Theatre and the 80-seat 1700 Theatre. Artistic programing includes a seven-play season; a two-play Steppenwolf for Young Adults season; Visiting Company engagements; and LookOut, a multi-genre performances series. Education initiatives include the nationally recognized work of Steppenwolf for Young Adults, which engages 14,000 participants annually from Chicago’s diverse communities; the esteemed School at Steppenwolf; and Professional Leadership Programs for arts administration training. Steppenwolf’s own Front Bar: Coffee and Drinks serves coffee, cocktails and a menu curated in partnership with the Boka Restaurant Group day and night. While firmly grounded in the Chicago community, nearly 40 original Steppenwolf productions have enjoyed success both nationally and internationally, including Broadway, Off-Broadway, London, Sydney, Galway and Dublin. Anna D. Shapiro is the Artistic Director and David Schmitz is the Executive Director. Eric Lefkofsky is Chair of Steppenwolf’s Board of Trustees. For additional information, visit steppenwolf.org,facebook.com/steppenwolftheatre, twitter.com/steppenwolfthtr and instagram.com/steppenwolfthtr.