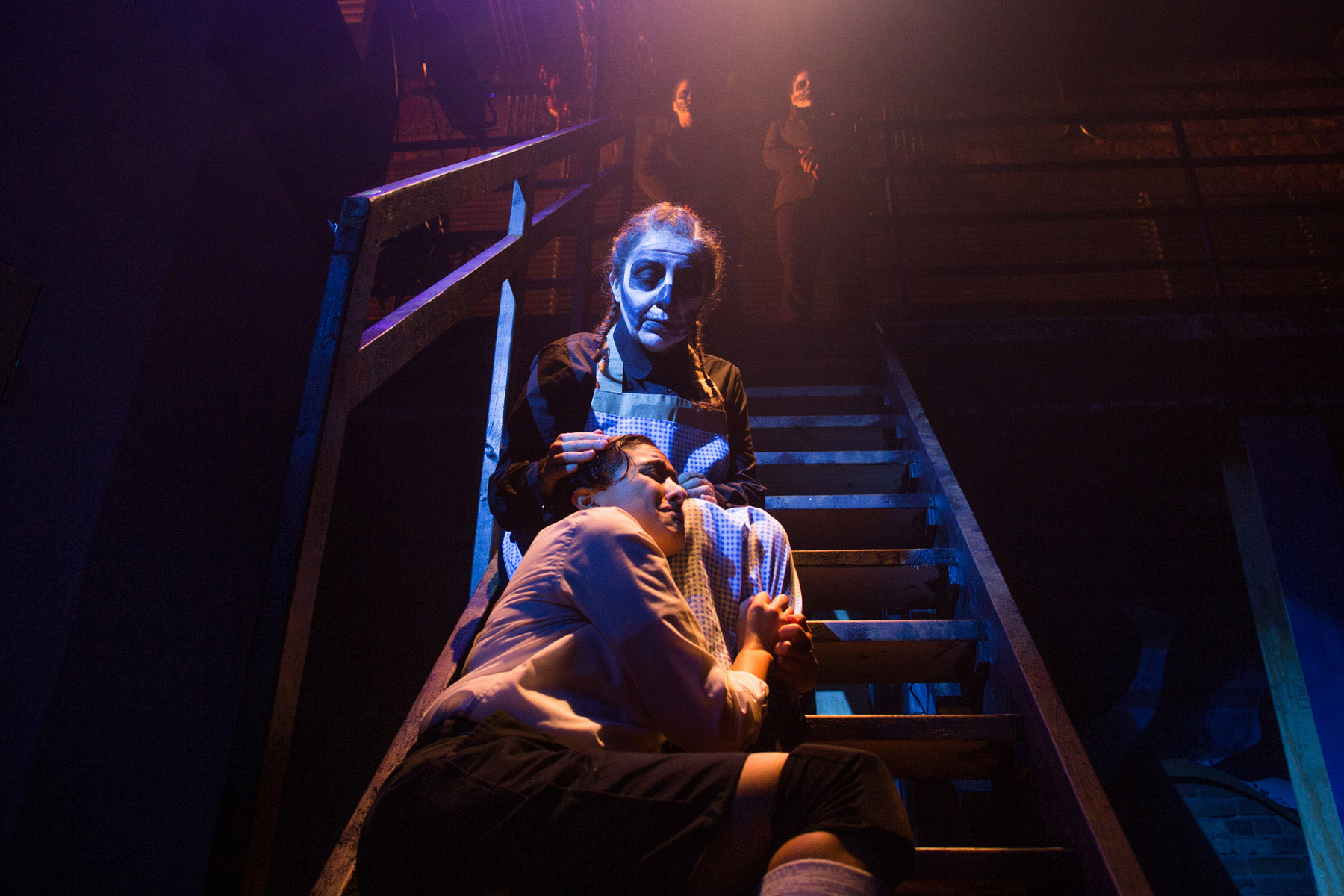 (front) Angelica Roque and Isabel Quintero with (back, left to right) Lorena Diaz and Wendy Mateo. Photo by Joel Maisonet

terraNOVA Collective and The Playground Theater, in association with the Chicago Department of Cultural Affairs and Special Events, are pleased to announce the world premiere of DON CHIPOTLE by Juan Francisco Villa (Empanada for a Dream), directed by Jo Cattell. A new Latino superhero is born in this epic coming-of-age adventure, told through theatre, puppetry, animation, music and a children’s choir. DON CHIPOTLE will play August 25 – September 27, 2015 at the Storefront Theater, 66 E. Randolph St. in Chicago.  Tickets are currently available at tix.com. For additional information, visit www.theadventuresofdonchipotle.com.

DON CHIPOTLE is a magical adventure, in which two eleven-year-old boys cross a vast metropolis in order to put the world right. Inspired by the classic story of Don Quixote and Juan Francisco Villa’s experience growing up in an immensely violent environment, this coming-of-age play explores cultural identity, violence, death, family and friendship and the importance of imagination and hope in any child’s ability to survive.

“Don Chipotle is the hero born out of his home circumstances similar to those faced by most inner city kids, comments playwright Juan Francisco Villa. “Despite the challenges Don Chipotle faces, he embodies persistence, perseverance and hope. Gina Rodriguez, in her Golden Globe acceptance speech, and Michelle Rodriguez, in her controversial comments, have talked about the need for Latino superheroes. Don Chipotle has arrived,” adds Villa.

This project was developed with support from the Pivot Arts Incubator Program at Loyola University Chicago.

Tickets: $15. $10 for students, seniors, industry and groups of ten or more. Tickets are currently available at tix.com.

Juan Francisco Villa is an award winning published playwright and actor whose work has been seen across the U.S. Empanada for a Dream, written and performed by Villa, made “Best of” lists for The Chicago Tribune, Chicago Reader and Los Angeles Times. As a playwright, he is a part of the ALTA El Semillero Playwrights Unit at Victory Gardens to develop his new Untitled 2025 Sci-Fi Play to be presented in October 2015. He has workshopped his plays with Pivot Arts, Theatre Squared, Inviolet, Teatro Vista and 16th Street Theater. Plays currently in development include el dragon del village, he will rise and gen-tried. Villa recently acted in a Jeff-nominated run of Teatro Vista’s production of Tamer of Horses by William Mastrinome, Directed by Jeff Award winner Ron “OJ” Parsons at Victory Gardens Theater. Recent Chicago theater credits include the world premiere of the Jeff Award -winning Mojada by Luis Alfaro (directed by Chay Yew) at Victory Gardens Theater and Your Name Will Follow You Home by Carlos Murrillo (directed by Dexter Bullard) in Steppenwolf Theater Company’s First Look Repertory of New Work. Chicago acting credits include work at The Goodman, Steppenwolf, Rivendell, SALSATION, 16th Street Theater, Chicago Dramatists and Teatro Vista. New York City acting credits include work at The Duke, Rattlestick, Mabou Mines, INTAR, terraNOVA Collective, Rising Circle, Monarch, HERO, Lark, Collaboration Town, BAX, 59E59 and La Mama. Los Angeles acting credits include Los Angeles Theater Center and Celebration Theater. TV credits: Chicago PD (NBC) and Betrayal (ABC). Film credits: One Night Stand (2014), The Tank (2015), Rogers Park (2016), Lac de Flambeau, Q, Gemini Rising (web series) and East Willy B (web series). Juan Assistant Directed Yasen Peyankov at Steppenwolf Theatre for their production of Grand Concourse by Heidi Shreck. He is an ensemble member of Teatro Vista, 16th Street Theater in Chicago and InViolet in NYC. He is a graduate of The Maggie Flanigan Meisner Studio in New York City. He is represented by Stewart Talent Agency. juanfranciscovilla.com

Jo Cattell is a producer/director/writer who has worked in theatre and television in the UK, Germany, France, Canada and the U.S. She currently works with Collaboraction in Chicago as Managing Director, as well as Resident Director for terraNOVA Collective in Chicago and New York City. Jo’s main focus as a director has been on developing new writing. She has been working on Juan Villa’s Don Chopotle for nearly two years, as well as Isaac Gomez’s play Women of Juarez for Pivot Arts at Loyola University and Andrea Lepcio’s Me You Us Them, which was recently given a workshop presentation at Cherry Lane, NYC. She is also working with dandypunk and Darin Basile on Heartcorps, which has been invited to Sundance 2016. She recently developed Boomers Millennial Hero Story by Steve DiUbaldo for a workshop presentation at A Red Orchid Theatre and was script consultant on Radiant Baby, the Keith Haring musical for The Public Theatre, NYC. She has directed for Origin Theatre Company, 1st Irish Theatre Festival, terraNOVA Collective, Leviathan Lab and was co-founder and Producing Artistic Director of BNTA in Las Vegas; she developed and directed Skyscraping by Tim Stimpson for Net Curtain Theatre Company, which premiered at London’s Soho Theatre Studio and was then transferred to the Southwark Playhouse; assisted Theresa Heskins on Tony nominated playwright, Bryony Lavery’s Precious Bane, for Pentabus Theatre; co-wrote and directed sketch comedy for the BBC; directed the first digital art installation for Canterbury Cathedral, 18:1-7 with C2atelyst Productions, UK; worked with at-risk youth for Grassmarket Project productions at Rutherglen Town Hall, Glasgow and The Roundhouse, London, staring David Harewood, and she was also acting coach for Cirque du Soleil on The Beatles LOVE, Las Vegas. With a background in dance, she has taught at the famed Pineapple Dance Studios in London, as well as choreographed and created physical theatre shows in London and Las Vegas. On the producing side, her experience has included working for SFX Theatricals, Clear Channel Entertainment, Sky Television, and NAMCO, on shows such as Fosse, Chicago the Musical, Tap Dogs, Chitty Chitty Bang Bang, Bombay Dreams and a series of award winning television documentaries on David Beckham, Michael Owen, Dwight Yorke and Jamie Rednapp.

The Playground Theater was founded in 1997 as an improviser lead comedy theater. A group of eight improv ensembles banded together to provide a venue for Chicago Improvisers to create and take control of their own artistic vision. The Playground puts the artistic vision in the hands of its performers. Founded in improvisation, The Playground at its core is a theater about creators and creation. Improv is traditionally our source for that creation, but that source and focus on creation has lead us into the worlds of producing improv, sketch comedy, standup and plays. Our focus is creating opportunities for artists to create, and we put it in their hands as to how that creation is presented. Over the years The Playground has been home to hundreds of Chicago improv and sketch ensembles, and thousand of performers. Or distinguished alumni include Jack McBrayer (30 Rock), Jason Sudekis (SNL), Vanessa Bayer (SNL), TJ Miller (Silicon Valley), Thomas Middelditch (Silicon Valley) and Lauren Lapkus (Orange is the New Black).

The Playground Theater is an artist led comedy theater.  Our mission is to provide home for comedians to grow as performers, writers, directors and producers.  We are committed to entertaining audiences with successful shows that reflect our core values:  fun, freedom, and opportunity. Laughter for all, forever