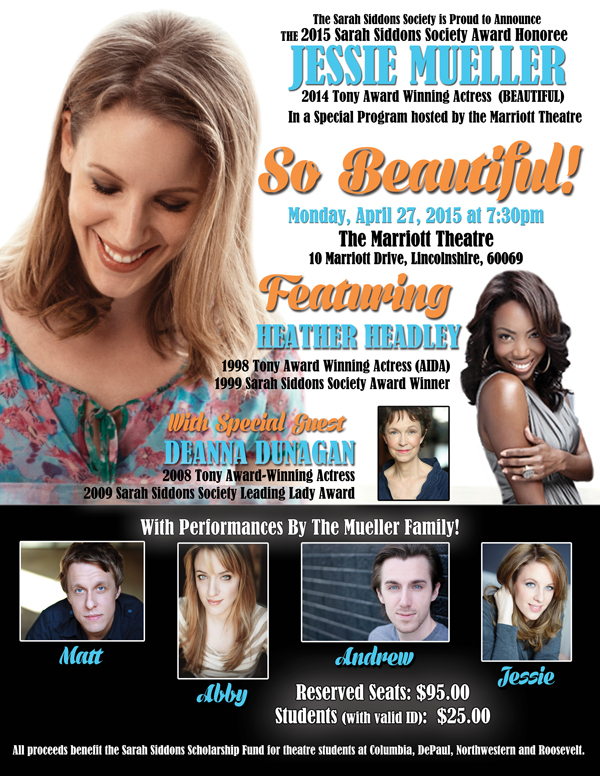 The Sarah Siddons Society’s Artistic Director, Dominic Missimi, announced plans to bestow on Jessie Mueller the organization’s prestigious Actress of the Year Award. Ms. Mueller won a Tony award in 2014 for her performance as Carole King in BEAUTIFUL: THE CAROLE KING MUSICAL. The tribute, entitled SO BEAUTIFUL!, will take place on Monday, April 27, 7:30 pm at the Marriott Theatre in Lincolnshire.

Star of many Chicago productions, Mueller will be joined in performance by actress and singer Heather Headley, 2000 Tony Award winner for her role as the Nubian princess Aida in Elton John’s AIDA. Ms. Headley also received the Sarah Siddons Society’s 1999 Actress of the Year Award.

In addition to performances by Ms. Mueller and Ms. Headley, the event will salute Chicago’s family of actors — the Muellers. Parents Roger Mueller and Jill Shellabarger will introduce their four children who will be highlighted performers on the program. Jessie’s sister Abby, currently appearing in KINKY BOOTS on Broadway, will be joined by brothers Andrew and Matthew, two popular Chicago performers.

“These artists are the pride of Chicago, and it is a thrill to have the opportunity to honor Jessie and to salute her amazing parents and siblings,” said Missimi. “And what a thrill it is for me to bring back Heather Headley, one of my former students from Northwestern University, to sing on the Marriott stage.”

The event will be hosted by Chicago Sun-Times columnist Bill Zwecker as Master of Ceremonies and will include appearances from many of Chicago’s leading theatre artists including Charles Newell, Artistic Director Court Theatre, and Terry James, Executive Producer Marriot Theatre. It also will showcase a musical number from the Marriott’s upcoming 2015 production of ANYTHING GOES with Stephanie Binetti as Reno Sweeney and Jameson Cooper as Billy. Doug Peck will serve as Music Director.

All proceeds from SO BEAUTIFUL! will support the Sarah Siddons Society’s Scholarship Fund for theatre students at Columbia College of Chicago, DePaul University, Northwestern University and Roosevelt University.