RAIN founder Mark Lewis discusses the ongoing success of the ultimate Beatles tribute band, his decision to move from band member to manager and the artistic integrity of the Beatles songbook. RAIN – A TRIBUTE TO THE BEATLES will play Broadway In Chicago’s Cadillac Palace Theatre (151 W. Randolph) for just two performances on April 14, 2019. For more information, visit BroadwayInChicago.com.

Mark Lewis (Founder, Manager, Original Keyboardist) As the managerial and creative mind that transformed RAIN – A TRIBUTE TO THE BEATLES from a 1970s southern California bar band doing Beatles covers into an ultra-professional group, Mark Lewis recruited the excellent musicians who would gel into Rain’s long-standing line-up. He traces his love of the Fab Four to the Sunday night of February 9, when his generation was smitten by The Beatles on The Ed Sullivan Show. Originally called Reign, the band gained national fame, changed its name to Rain and cut the soundtrack to the made-for-TV movie Birth of the Beatles (thanks to Dick Clark). An accomplished pianist at 13, having studied since age 5, he began his career playing the Farfisa organ in teenage rock bands around his native Los Angeles. It was Mark, the original keyboard player with RAIN – A TRIBUTE TO THE BEATLES, who worked out all of the musical parts and sounds that enabled RAIN – A TRIBUTE TO THE BEATLES to bring many songs that The Beatles themselves never performed live, to life. 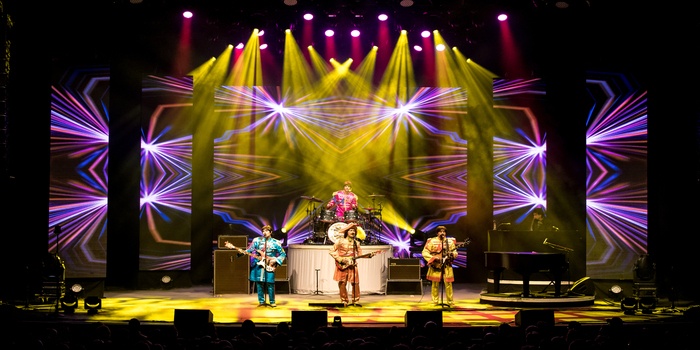 RAIN – A TRIBUTE TO THE BEATLES presents The Best of Abbey Road Live! In celebration of the anniversary of the release of Abbey Road, RAIN will bring the greatest hits to life in addition to all your early favorites. This mind-blowing performance takes you back in time with the legendary foursome delivering a note-for-note theatrical event that is the next best thing to seeing the Beatles. Experience the worlds’ most iconic band and come celebrate the best of Abbey Road with RAIN.

In addition to the updated sets that include state of the art LED, high-definition screens and multimedia content, RAIN will bring the Abbey Road album to life with the launch of the 2019 Tour.

Together longer than The Beatles, RAIN has mastered every song, gesture and nuance of the legendary foursome, delivering a totally live, note-for-note performance that’s as infectious as it is transporting. Let RAIN take you back with all of the greatest hits along with all of your other Beatles favorites! This adoring tribute will take you back to a time when all you needed was love, and a little help from your friends!

Like The Beatles, the onstage members of RAIN are not only supreme musicians, but electrifying performers in their own right!

TICKET INFORMATION
Tickets to RAIN – A TRIBUTE TO THE BEATLES range in price from $18-$75 with a select number of premium seats available.  Tickets are available for groups of 10 or more by calling Broadway In Chicago Group Sales at (312) 977-1710 or emailing GroupSales@BroadwayInChicago.com.  For more information, visit BroadwayInChicago.com.

ABOUT BROADWAY IN CHICAGO
Broadway In Chicago was created in July 2000 and over the past 19 years has grown to be one of the largest commercial touring homes in the country.  A Nederlander Presentation, Broadway In Chicago lights up the Chicago Theater District entertaining more than 1.7 million people annually in five theatres.  Broadway In Chicago presents a full range of entertainment, including musicals and plays, on the stages of five of the finest theatres in Chicago’s Loop including the CIBC Theatre, James M. Nederlander Theatre, Cadillac Palace Theatre, and just off the Magnificent Mile, the Broadway Playhouse at Water Tower Place and presenting Broadway shows at The Auditorium Theatre. For more information, visit www.BroadwayInChicago.com. Facebook @BroadwayInChicago ● Twitter @broadwaychicago ● Instagram @broadwayinchicago ● #broadwayinchicago