ANASTASIA star Lila Coogan discusses the complexities of portraying the historical character and how she was able to make the role relatable to a universal audience. ANASTASIA will make its Chicago debut at Broadway In Chicago’s Oriental Theatre (24 W. Randolph) for a limited two-week engagement March 26 through April 7, 2019. For more information, visit www.BroadwayInChicago.com.

Lila Coogan (Anya) is thrilled to be joining the cast of Anastasia on tour! Previous credits include Broadway: Mary Poppins (Jane Banks). Regional: Hairspray at Syracuse Stage (Penny Lou Pingleton). Television: ABC’s “What Would You Do?” with John Quinones. Lila also had the opportunity to star opposite Donna Murphy in the title role of Pamela in the Broadway Care Actors Equity Fights Aids benefit concert production of Pamela’s First Musical. The show featured a score by David Zippel and Cy Coleman, and a book by Wendy Wasserstein. Lila attended Syracuse University and received her BFA in Musical Theatre. 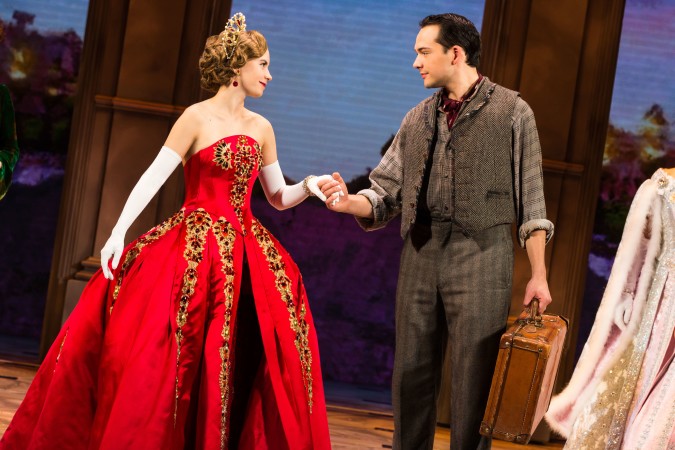 From the Tony Award®-winning creators of the Broadway classic Ragtime, ANASTASIA is a dazzling new show that transports us from the twilight of the Russian Empire to the euphoria of Paris in the 1920s, as a brave young woman sets out to discover the mystery of her past. Pursued by a ruthless Soviet officer determined to silence her, Anya enlists the aid of a dashing conman and a lovable ex-aristocrat. Together, they embark on an epic adventure to help her find home, love, and family.

This 2017 Broadway hit features book by celebrated playwright Terrence McNally, a lush new score by Stephen Flaherty (music) and Lynn Ahrens (lyrics) that features favorites “Journey to the Past” and “Once Upon a December,” and direction by Tony Award® winner Darko Tresnjak.

The new musical has played to sold out crowds on Broadway in addition to garnering multiple Tony, Drama Desk and Outer Critics Circle awards and nominations.

The original Broadway cast recording is available at BroadwayRecords.com, Amazon.com and iTunes. The 75-minute album includes the Academy Award-nominated favorite “Journey to the Past” alongside new numbers from the show such as Christy Altomare’s haunting “In My Dreams,” Ramin Karimloo’s passionate “Still,” and Derek Klena’s heart-racing “My Petersburg.”

ABOUT BROADWAY IN CHICAGO
Broadway In Chicago was created in July 2000 and over the past 19 years has grown to be one of the largest commercial touring homes in the country.  A Nederlander Presentation, Broadway In Chicago lights up the Chicago Theater District entertaining more than 1.7 million people annually in five theatres. Broadway In Chicago presents a full range of entertainment, including musicals and plays, on the stages of five of the finest theatres in Chicago’s Loop including the Cadillac Palace Theatre, CIBC Theatre, James M. Nederlander Theatre, and just off the Magnificent Mile, the Broadway Playhouse at Water Tower Place and presenting Broadway shows at The Auditorium Theatre of Roosevelt University.