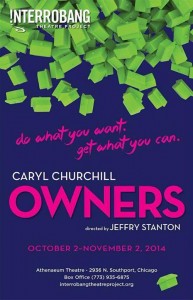 Marion’s husband wants her dead, but she’s too busy to notice. The North London real estate market is booming, and she’s out to make a killing. When Marion discovers she can’t buy out a family from one of her properties, she takes ownership of their most prized possession.

As resonant today as when it premiered in 1972, OWNERS is a provocative, yet savagely funny play about power, progress and the price of ownership, encapsulated by the central character’s motto, “Do what you want. Get what you can.”

Curtain Times: Thursdays, Fridays and Saturdays at 7:30 pm; Sundays at 2 pm. Please note: there will be added matinee performances on Saturday, October 18 at 2 pm and Saturday, November 1 at 2 pm.

The author of groundbreaking, genre-redefining, even gender-bending modern masterpieces such as Top Girls, Serious Money and Cloud 9, Caryl Churchill is widely regarded as one of the English language’s greatest living playwrights. In a career spanning from Owners, her first professionally produced play, to Love and Information, currently making its American premiere in New York, Ms. Churchill’s body of work reflects a long and deep engagement with issues of politics, economics, gender, and personal responsibility.

Jeffry Stanton’s directing credits include: The Pitchfork Disney, Terminus, Speaking in Tongues, Hot ‘N’ Throbbing, The Argument, Here Lies Henry and A Number (Interrobang Theater Project), One Minute Play Festival (Victory Gardens Theatre), Love War Death Life (American Theater Company), I Am My Own Wife (Boston Center for American Performance), 1984 (Olney Theatre Center), The Birthday Party, Iphigenia 2.0, One Flea Spare, Under Milk Wood, Machinal and A Midsummer Night’s Dream.  Jeffry was a member of the adjunct faculty of Emerson College and Boston University where he taught acting, ensemble-theatre, theatre history and literature. Jeffry received his BFA in Acting and, much later, MA in Theatre Education from Emerson College, and an MFA in Directing from Boston University. He is an Associate Member of the Society of Stage Directors and Choreographers.

Founded in 2010, Interrobang Theatre Project (Jeffry Stanton and James Yost, Co-Artistic Directors) produces visceral and timely plays, new American works and rare texts that are not readily seen on other Chicago stages. Interrobang is not recommended for audiences who prefer theatre to be benign or familiar.

Now in its 5th season, Interrobang Theatre Project, under the artistic leadership of founder Jeffry Stanton and James Yost, has been hailed by the Chicago Tribune as a “company to watch” and by Time Out Chicago as “one of Chicago’s most promising young theatre companies.”

Productions have included the world premiere of Ibsen is Dead by Calamity West; the Midwest premiere of The Argument by Gregory Moss; the Jeff Award Recommended The Pitchfork Disney, Terminus and Orange Flower Water; Speaking in Tongues, Here Lies Henry, and the critically-acclaimed Hot ‘N’ Throbbing which Time Out Chicago’s 5-star review called a “scintillating revival” and Newcity Stage exclaimed, “Interrobang Theatre Project, guns ablaze, dives headfirst into the play’s challenging themes, and offers a rare production in which every element onstage is as robust and capable as every other.”

An interrobang is the combination of a question mark and an exclamation point, joining the Latin for “question” (interro) with a proofreading term for “exclamation” (bang). Punctuation expresses an attitude, an idea, an attempt to make things clearer. Through the plays we produce, Interrobang Theatre Project poses muscular questions. Navigating through the dark together with our audience we attempt to arrive at new understandings and fresh perspectives of who we are and the world in which we live.