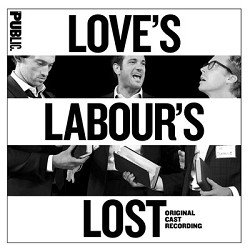 Ghostlight Records will release the original cast recording of The Public Theater’s production of LOVE’S LABOUR’S LOST this summer. The album will be available in digital format on June 3 with physical CDs available online and in stores on July 8. The production was recently nominated for three 2014 Drama Desk Awardsfor Outstanding Musical, Outstanding Lyrics and Outstanding Choreography. Directed by Alex Timbers,LOVE’S LABOUR’S LOST features songs by Michael Friedman with book adaptation by Timbers. Two tracks from the upcoming album – “Young Men” and “Hey Boys” – are available to stream at www.sh-k-boom.com.

The physical CD is a deluxe jewel case package containing a full-color 36-page booklet with lyrics, photos, a show synopsis, notes from renowned writer Mark Harris (Entertainment Weekly, Grantland) and The Public Theater’s Artistic Director Oskar Eustis, an essay from Columbia University Professor James Shapiro and an essay by Hilton Als that originally appeared in The New Yorker. Sign up to pre-order at www.sh-k-boom.com/loveslabourslost.

In LOVE’S LABOUR’S LOST, romance, revelry and enchanting music ignite in this contemporary yet lovingly faithful musical adaptation of Shakespeare’s comedy. The King and his best buds decide at their five-year college reunion to swear off the joys of women. But when four cute, clever girls from their past show up, they’re forced to reconsider all of that nonsense! Smart, sexy, outrageous and irreverent, LOVE’S LABOUR’S LOST is a madcap celebration of true love and coming of age. LOVE’S LABOUR’S LOST was developed in collaboration with Les Freres Corbusier.

Free Shakespeare in the Park is one of the most important programs that The Public provides and is at the heart of founder Joe Papp’s vision to create theater for all. In the last 50 years, more than 5 million people have enjoyed performances at the Delacorte.

Bank of America continues its leadership sponsorship in support of The Public’s mission to keep Shakespeare in the Park free.

The Public Theater has a long history of premiering new musicals at the Delacorte that have made a strong impact on the landscape of musical theater and are still performed around the world today. The first musical adaptation of Shakespeare’s work at the Delacorte was Two Gentleman of Verona, The Musical which premiered in 1971 with music by Galt MacDermot, lyrics by John Guare and direction by Mel Shapiro. The Broadway transfer won the 1972 Tony Award for Best Musical and Best Book. The acclaimed musical was later revived at the Delacorte in 2005 with a cast that included Norm Lewis, Rosario Dawson and Renee Elise Goldsberry, and was directed and choreographed by Kathleen Marshall. In 1980, The Public produced the musical The Pirates of Penzance, featuring Kevin Kline, Linda Ronstadt and Rex Smith, at the Delacorte. It later transferred to Broadway and won the 1981 Tony Award for Best Musical Revival. The Mystery of Edwin Drood by Rupert Holmes premiered at the Delacorte in 1985, featuring George Rose, Donna Murphy, Judy Kuhn and Betty Buckley, and was directed by Wilford Leach. The Broadway transfer won the 1986 Tony Award for Best Musical, Best Book, Best Original Score, Best Lead Actor and Best Direction of a Musical. In 2008, The Public Theater revived the musical HAIR, first created by The Public in 1967, for an acclaimed Shakespeare in the Park run that included Jonathan Groff and Will Swenson, and was directed by Diane Paulus. The Broadway transfer won the 2009 Tony Award for Best Musical Revival.

Sh-K-Boom with its imprint Ghostlight Records has become the leading independent force in Original Broadway Cast Recordings – building a library of over 130 records in the last 13 years, featuring the most successful Broadway musicals and solo albums by Broadway’s brightest stars. Founded by Kurt Deutsch and Sherie Rene Scott, Ghostlight has won two Grammy Awards (for The Book of Mormon and In the Heights) and is a frequent nominee, most recently for the OBCR of Disney’s Newsies and new cast recording of Anything Goes. Other notable recent releases include Pippin, Rodgers + Hammerstein’s Cinderella and Hands on a Hardbody, plus The Last Five Years, Giant, Dogfight, Natasha, Pierre and the Great Comet of 1812 and the premiere recording of Carrie. The label has also released solo albums from some of Broadway’s biggest names: Sutton Foster, Kelli O’Hara, Alice Ripley, Christine Ebersole, Melissa Errico and Ben Vereen. Additional titles on Ghostlight include Next to Normal, Hair, Legally Blonde, Everyday Rapture, Passing Strange, Dirty Rotten Scoundrels, The 25th Annual Putnam County Spelling Bee and The Drowsy Chaperone. Sh-K-Boom Entertainment is a producer of the upcoming film version of The Last Five Years, written and directed by Richard LaGravenese and starring Anna Kendrick and Jeremy Jordan. It is expected for release this year. www.sh-k-boom.com.