Ghostlight Records Announces Sept. 23rd Release of HIMSELF AND NORA

Ghostlight Records has announced release of HIMSELF AND NORA – the 2016 Off-Broadway Cast Recording, Live from the Minetta Lane Theatre, NYC – a new musical with book, music, and lyrics by Jonathan Brielle.  The album will be available from iTunes and other digital formats Friday, September 23, with physical copies online and in stores Friday, October 7. To pre-order the album, which includes includes a color booklet with production photography, please visit sh-k-boom.com/himself-and-nora.

HIMSELF AND NORA follows one of the world’s great romances. James Joyce, among the most provocative and influential writers of all time, had his creativity, imagination, and desire transformed by Nora Barnacle. She was the country girl from Galway whose burning sexuality and acerbic wit inspired his genius. Ripped from pages of their intimate life together and informed by their Irish roots, the show reveals the private life of one of modern literature’s most controversial figures and illustrates the untold story of Joyce’s lifelong love and muse Nora. HIMSELF AND NORA opens a window into an unconventional and passionate love affair which changed literature forever.

“We’re excited that HIMSELF AND NORA is one of the rare cast albums recorded live in the theater,” says the show’s creator Jonathan Brielle. “The listener can truly enjoy the organic spirit of this ensemble piece. This method captures the chemistry of the performers in real time, instead of trying to recreate it in the studio. Plus, the production’s special sound design is a key element that let us preserve the audience experience for posterity.” 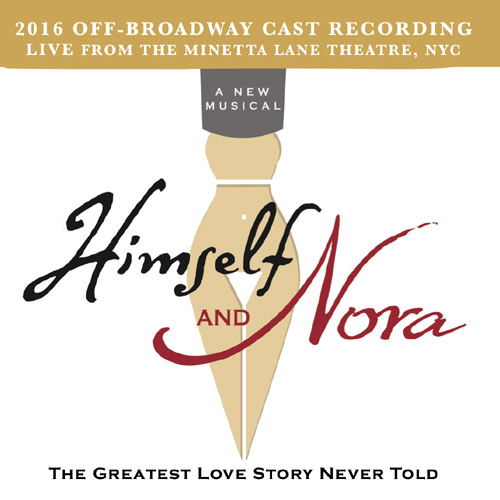 When this production opened Off-Broadway it was hailed as “smart, lively and tuneful” by The Huffington Post, “one of the hottest shows of the season” by BroadwayWorld, and “a rare breed, a truly romantic musical” from WBAI Radio. The Knockturnal praised “Jonathan Brielle’s upbeat, contemporary musical score which ranges from jig-inducing Irish step music to wistful, crowd-pleasing ballads.” On Stage Blog said “Matt Bogart has an engaging voice that soars through the register with delightful ease and impressive strength.” According to BroadwayBox, “Whitney Bashor’s performance is worth the price of admission.”

Developmental productions of HIMSELF AND NORA were presented by the Old Globe Theatre; Hamilton Stage and the New York Musical Theatre Festival (NYMF). Additional developmental work was done with the James Joyce Center in Dublin, Ireland.

More information is available at www.HimselfandNoraMusical.com.

JONATHAN BRIELLE wrote the music and lyrics for Broadway’s Foxfire with Jessica Tandy, Hume Cronyn, and Keith Carradine. Many of his scores were performed Off-Broadway as Composer in Residence of Circle Repertory Company. His regional credits include Nightmare Alley (book, music. lyrics) at Geffen Playhouse, Gil Cates Director, and NYMF; and Forty Naked Women, A Monkey and Me (book, music, lyrics) at the Eugene O’Neill Conference. Las Vegas credits include Enter The Night (book, music, lyrics), which played for 12 years at the Stardust Hotel; MadHattan (book, music, lyrics) at the New York, New York Hotel. He served as Executive Music Supervisor for the Rugrats, Live! US Tour and Music Producer for the Goosebumps, Live! US Tour. He wrote music and lyrics for TV’s “Wonderama” and serves as Musical Director for the national television show beginning this year. Brielle has served as Executive Vice President of the Johnny Mercer Foundation (JMF), creating programs for federally funded schools in New York, Newark, Los Angeles, Miami and Atlanta. He was a writer/producer in Residence of the Johnny Mercer Writers’ Colony at Goodspeed Musicals and helps oversee the JMF Songwriting Project at Northwestern University.  Jonathan is the former National Projects Director of the Songwriters Guild of America.