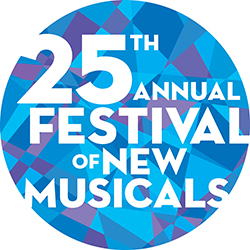 Tony nominees Stephanie D’Abruzzo (Avenue Q) and Barbara Walsh (Company), along with Jason “SweetTooth” Williams(Bloodsong of Love), Jason Michael Snow (The Book of Mormon) star in Come From Away a musical about the thousands of people diverted to Gander, Newfoundland on 9/11, which features book, music & lyrics by David Hein and Irene Sankoff.  Brian Hill directs, with Dan Pardo as music director.

A coming of age musical of a young girl fleeing her African village, My Heart is the Drum, features a book by Jennie Redling, concept & music by Phillip Palmer  and lyrics by Stacey Luftig.  Schele Williams will direct.  Joseph Church (The Lion King) is music director.  Tommar Wilson (The Book of Mormon) is featured.

Additional staffing and casting will be announced at a later date.

For the tenth consecutive year, NAMT’s Festival of New Musicals will be presented at the premiere Off Broadway facility New World Stages, located at 340 West 50th Street. A limited number of free seats will be available to the public on a standby basis. Registration for Industry members is free and now open at www.namt.org/festival.

SHOW OFF!, a benefit concert celebrating 25 years of NAMT’s Annual Festival of New Musicals on Sunday, October 20 at 7pm at New York University’s Skirball Center for the Performing Arts (566 LaGuardia Place at Washington Square). Tony winners Beth Leavel (The Drowsy Chaperone) and Lillias White (The Life) along with Sierra Boggess (Disney’s The Little Mermaid), Kerry Butler (Catch Me If You Can), Patti Murin (Lysistrata Jones), Dee Hoty (The Will Rogers Follies), Susan Egan(Disney’s Beauty and the Beast), and Grammy winner Amanda McBroom (“The Rose”) are among the performers.

The benefit concert is a special conclusion to this year’s Annual Festival of New Musicals which takes place October 17-18 at New World Stages.  Tickets to the concert and reception are available now at www.namt.org/showoff.

Featuring songs from past Festival shows from throughout the 25 years, including The Drowsy Chaperone, Thoroughly Modern Millie, Honk!, Children of Eden, Ordinary Days,  and many more.  The concert is directed by Tony winner David Zippel, with continuity by Brian Hargrove, music direction by Brad Haak and choreography by Lorin Latarro.  Branden Huldeen (NAMT’s New Works Director) is Creative Producer.

In the past 25 years, NAMT has introduced over 250 shows and 475 writers to the industry, and over 75% of these shows have found subsequent productions, tours, licensing agreements and/or cast albums as a direct result of the Festival.  Some of the most well-known Festival highlights are Tony Award winners The Drowsy Chaperone and Thoroughly Modern Millie; Off Broadway shows such as Nobody Loves You (recently seen at Second Stage Theatre), The Memory Show (seen this season at The Transport Group), See Rock City & Other Destinations, Vanities–a new musical, Ordinary Days, I Love You Because, Ruthless, Songs for A New World, Striking 12,; and regional successes Ace, Children Of Eden, Jane Austen’s Emma, Harold and Maude, Honk!, Meet John Doe and It Shoulda Been You, among others.

About the National Alliance for Musical Theatre:

The National Alliance for Musical Theatre, founded in 1985, is a not-for-profit organization serving the musical theatre community. Our mission is to advance musical theatre by nurturing the creation, development, production and presentation of new musicals, and to provide a forum for musical theatre professionals to share resources and exchange information. Our 190 members, located throughout 32 states and abroad, are some of the leading producers of musical theatre in the world and include theatres, presenting organizations, higher education programs and individual producers.

Among the over 250 musicals launched by NAMT’s annual Festival of New Musicals are Thoroughly Modern Millie, Children of Eden, Honk!, The Drowsy Chaperone, Songs for a New World, I Love You Because, Striking 12, Vanities and many others, representing over 475 writers.