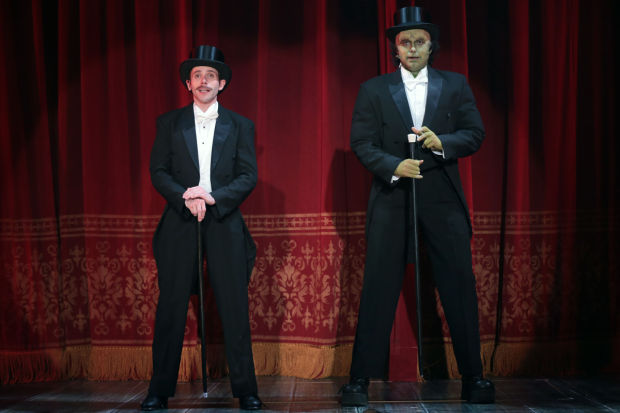 As we have seen of late, turning a popular film into a musical more often fails then succeeds.  So in 2001 when Mel Brook’s adaptation of The Producers broke almost every Broadway box office record to date and became the darling of the critics, it was only a matter of time before his next big property made the leap from screen to stage.  For Young Frankenstein, Mr. Brooks’ decided it was best to stay with the same creative team he had in place for The Producers, including co-collaborator Thomas Meehan and director Susan Stroman, .   But luck did not strike twice  and the show quickly found that it did not have the traction of its predecessor, closing in just over a year.

After seeing the national tour of Young Frankenstein at the Cadillac Palace with its two Broadway stars in 2009, it became clear why the show faltered.  With The Producers, the subject matter alone inherently fits for the stage and has the ability to stand alone from the film.  Brooks made his 1975 film of Young Frankenstein as a parody of the original 1932 Boris Karloff thriller, which makes the musical adaptation reliant on both prior celluloid properties and severely restricts the creative freedom for a director or actor who want to take on this work.

With that said, there is a lot to like in Drury Lane’s big scale new production of Young Frankenstein.  With some ‘casting against type’, director William Osetek finds a way to keep known material surprisingly fresh and at many times seemingly original. This can be seen at the outset with the multi-talented Devin DeSantis as Frederick von Frankenstein.  As a long time fan of this actor back from his Altar Boyz days, Mr. DeSantis’ smartly plays the role straight down the middle, letting the comedy flow from the characters around him.  This approach end up giving us a very different Doctor than Gene Wilder’s film version and allows the other cast members a little more creative wiggle room, for which they take full advantage.

Osetek has also put some of Chicago’s iconic actors in these iconic roles to ensure the comedic genius of Brooks comes through.  Both Jeff Dumas’ hump shifting Igor and Paula Scrafano’s Frau Bluker had the audience in stitches.  Just their presence on the stage is a reminder that we don’t have to look to other cities to find our lead actors. Travis Taylor is a scene stealer as the toe tapping Monster, a role expanded from the film version, especially in the hilarious “Putting On The Ritz” (choreographed by Tammy Mader) which is still one of the greatest comedy bits ever written.

Thanks to William Osetek and company (along with some top notch musical direction by Roberta Duchak and a masterful set by Kevin Depinet)  this Young Frankenstein has one thing going for it that its Broadway did not…..it has LIFE!!!