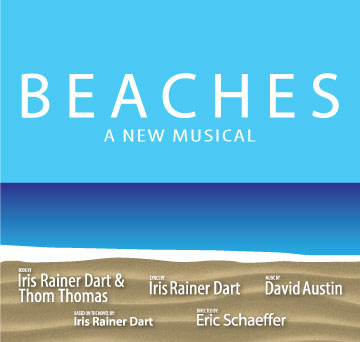 “This is one of the most exciting seasons that we’ve ever presented in our 31-year history,” said DeSantis. “We are elated to produce BEACHES, the first new production in two decades on the Drury Lane stage, as well as two Regional Premieres and two musical revivals. We believe that we have a responsibility to help cultivate the development of new works and this season marks our renewed commitment to this.”

Drury Lane Theatre has garnered the rights to present the Regional Premieres of two of the hottest titles on stage in recent Broadway history including BILLY ELLIOT and PETER AND THE STARCATCHER. With a score by Elton John, BILLY ELLIOT is the winner of 10 Tony Awards and has captivated 9.5 million theatergoers around the world. PETER AND THE STARCATCHER won five 2012 Tony Awards, the most of any play of the 2011-2012 season. It was also named one of The New York Times, New York Magazine and New Yorker’s Top 10 Shows of the Year. The season also includes the time-honored family treasures Irving Berlin’s WHITE CHRISTMAS and BYE BYE BIRDIE, one of the most iconic musical productions of our time.

The season begins with the Regional Premiere of the international smash hit musical BILLY ELLIOT, previewing April 10, opening April 16 at 8 p.m. and running through June 7, 2015. Multi-Jeff Award winner Rachel Rockwell (Les Misérables, The Sound of Music, and Oliver! at Drury Lane Theatre) will direct with Musical Direction by Jeff Award winner Roberta Duchak (Les Misérables, and Sweeney Todd, at Drury Lane Theatre, vocal coach for Russell Crowe and Hugh Jackman for the Academy Award-winning film Les Misérables). One of the most celebrated musicals on stage today, BILLY ELLIOT has been dazzling London’s West End since 2005. The production is the winner of 10 Tony Awards and 10 Drama Desk Awards, including Best Musical, and features an explosive score by Elton John (The Lion King, Aida) and Book and Lyrics by Lee Hall, who wrote the screenplay for the Academy Award-nominated film that inspired the musical. BILLY ELLIOT is “Thrilling! Impossible to resist!” (The New York Times); “A triumph! The #1 show of the year!” (Time); and “One of the century’s most thrilling pieces of musical theater!” (San Francisco Chronicle).

Following BILLY ELLIOT, Drury Lane Theatre will present the Broadway-Bound new musical BEACHES, previewing June 24, opening July 2 at 8 p.m., and running through August 16. The production is a poignant yet uplifting story of two extraordinary women exemplifying the triumph of the human spirit and the bonds of sisterhood. BEACHES was adapted from the 1985 novel by Iris Rainer Dart, which was later adapted into the popular 1988 film starring Bette Midler and Barbara Hershey. BEACHES features a book by Iris Rainer Dart and Thom Thomas, lyrics by Iris Rainer Dart, and music by David Austin.

The Regional Premiere of the Tony Award-winning play, PETER AND THE STARCATCHER, will preview August 27, open September 3 at 8 p.m. and run through October 18. Drury Lane Theatre Artistic Director and Jeff Award Winner William Osetek (Next to Normal and Spamalot at Drury Lane Theatre) will direct. Adapted by Rick Elice and based on the best-selling novel by Dave Barry and Ridley Pearson, PETER AND THE STARCATCHER is an enchanting, swashbuckling prequel to Peter Pan and the Neverland you never knew. A company of twelve actors plays more than a hundred unforgettable characters on a journey to solve the mystery of how Peter Pan became “The Boy Who Never Grew Up.” The winner of five Tony Awards first opened on Broadway in 2012 and became a massive hit. The New York Times called it “The most exhilarating Broadway storytelling in decades!” and Entertainment Weekly raved “An absurdly funny, fantastical journey!”

Previewing October 29, opening November 5 at 8 p.m. and running through January 3, 2016, WHITE CHRISTMAS is joyful entertainment just in time for the holiday season. Directed by Drury Lane Theatre Artistic Director William Osetek with choreography by Matthew Crowle (Singin’ in the Rain at Drury Lane Theatre), the story follows two former Army buddies – turned Broadway performers – as they attempt to save a charming Vermont Inn from bankruptcy. With a book by David Ives and Paul Blake and music and lyrics by Irving Berlin, WHITE CHRISTMAS has been called “A holiday card come to life!” by The New York Daily News. The New York Times exclaimed “This cozy trip down memory lane should be put on your wish list!” Irving Berlin’s classic production, nominated for two Tony Awards, features festive favorites like Blue Skies, Count Your Blessings, I Love a Piano, and, of course, White Christmas.

To conclude its 2015-2016 season, Drury Lane Theatre will feature the classic All-American musical BYE BYE BIRDIE previewing on January 14, opening January 21 at 8 p.m. and running through March 20. Directed and Choreographed by Jeff Award winner Tammy Mader (Hairspray and Buddy: The Buddy Holly Story at Drury Lane Theatre), BYE BYE BIRDIE is an exhilarating dance spectacular and winner of four Tony Awards. The New Yorker exclaimed, “Fifty years on, BYE BYE BIRDIE is still light, frothy, and irresistible!” With a book by Michael Stewart and music and lyrics by Lee Adams, the production follows handsome, popular rock star, Conrad Birdie, during the late 1950s as he is drafted to the military. Before leaving for the army, Conrad’s agent, Albert, stages a publicity stunt for Conrad to kiss one lucky fan on The Ed Sullivan Show and fifteen-year-old Kim MacAfee, from Sweet Apple, Ohio, is selected. Conrad Birdie gets more than he bargained for when he arrives in the Midwestern town, which is reeling with excitement for his visit. The upbeat score includes favorites such as Put on a Happy Face, Bye Bye Birdie, and A Lot of Livin’ to Do.

Become a Drury Lane Theatre subscriber for as low as $140 per person. Subscribers receive special offers on dining, early notification and priority seating for added events and concerts and a flexible ticket exchange policy.