I consider myself an ardent Disney fan, purchasing almost every movie and recording that the House of Mouse puts out. I remember downloading the original cast recording for Aladdin while I was working a contract at a regional theatre. I put it on in the car and set out for what I expected to be an hour cruise, I was back at the house within twenty minutes. That was the last time I had listened to that recording.

As I took my seat at the Cadillac Palace Theatre, I was unsure of what I was about to experience. Was I going to have my heart stomped on again, much like I did while viewing Disney’s Beauty and the Beast live action film, or would there be an alternative. From the downbeat of the “Overture” I started to get chills. As the curtain rose revealing the barren desert of Agrabah, I was reminded of the genius of Disney. Neither, the chills or the reminders of a brilliant company left the rest of the show.

Adam Jacobs fresh off of Broadway reprises his role of Aladdin. Jacobs embodies the spirit and personality of the role so easily, it is almost as if it were written for him. Jacobs skillfully masters his way through this lush Disney score penned by Alan Menken, the late Howard Ashman, Tim Rice, and Chad Beguelin. “Proud of Your Boy” is one of the most beautiful moments of the evening. Jacobs’s chemistry with Isabella McCalla, who plays Jasmine, is so compelling and their voices blend beautifully. Their duet “A Million Miles Away” is one of my favorite additions to the score. 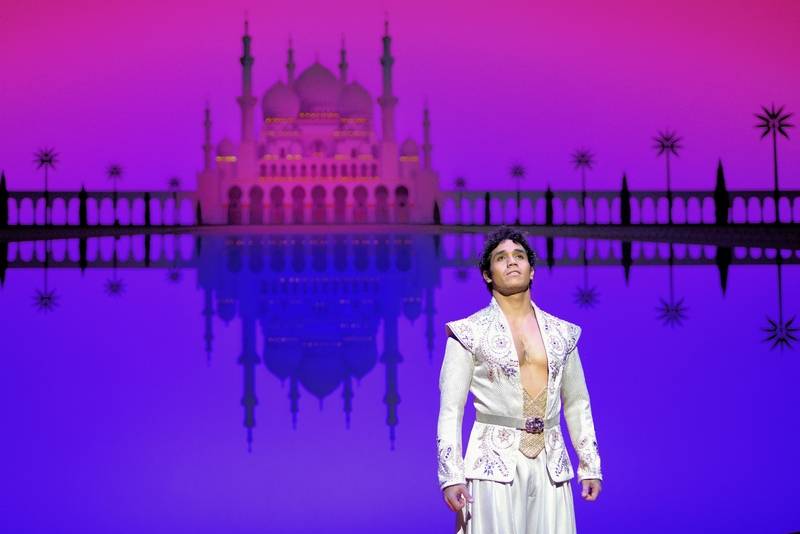 Isabella McCalla is the perfect Disney Princess, the looks, the demeanor, and a fantastic voice. She has the toughness and determination that the character calls for.

Babkak played by Zach Bencal, Omar by Philippe Arroyo, and Kassim by Mike Longo take over for Abu the monkey as Aladdin’s pals. Together the three friends cause as much mischief as any monkey would and loyalty is not something that they lack. The chemistry between them is perfect. Their characters are a perfect blend, making them a joy every time they appear.

The Female Attendants played by Mary Antonini, Olivia Donalson, and Annie Wallace take place of the role of Princess Jasmine’s pet tiger Rajah. They are just as equally as enjoyable as the three pals for Aladdin. Their tight harmonies and costumes during the number “These Palace Walls” made me want Hercules to be Disney’s next Broadway project.

JC Montgomery’s portrayal of Sultan was a much enjoyed take on the character. Montgomery makes the Sultan less of a bumbling older man and more; a father whose daughter has him wrapped around her pinky.

Jafar played by Jonathan Weir and Iago by Reggie De Leon are the perfect Villainous duo. Iago is no longer a bird but a hilarious sidekick to the Royal Wazir. Weir and De Leon have tremendous chemistry together making everything they do a delight to watch. Their song “Diamond in the Rough” was a hysterical addition to the score.

Anthony Murphy takes on the iconic role of Genie. Murphy does not let you down in the least. While making the role very much his own it is laced with little nods to the late Robin Williams. Murphy makes your gut hurt from laughing so hard. From the moment he appears on the stage until the final bow he is the life of the party.

Wednesday I walked into the theatre with the expectation of being disappointed. Thanks to Chad Beguelin’s new book and some wonderful new spins on adored animal characters, Alan Menken’s additional songs, Casey Nicholaw and his incredible gift to tell stories, and the magic that is Disney, I walked out of there in love with the show. It has been a while since I was engulfed in something that made me smile and have fun for two and half hours. It was rewarding to see so many moments, costumes, and songs that were straight from the movie. No reinvention just adaptation.

Disney’s Aladdin is playing at the Cadillac Palace Theatre through September 10, 2017. Tickets are on sale now and can be found at broadwayinchicago.com. Get your tickets now because they will not last long