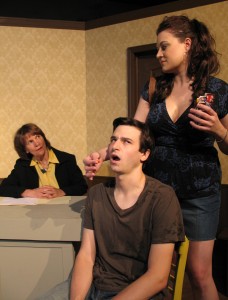 Life is a series of choices and how we make those choices is  ultimately how we are remembered after we have departed.   The choice to take care of an ailing loved one and abandon any claim one may have on having a life of their own is the ultimate in sacrifice.  Circle Theatre’s intimate and moving remount of Scott McPherson’s 1990 play Marvin’s Room explores this issue and many more.

Marvin’s  Room, which had its initial premiere at the Goodman’s studio theatre, tells the story of two sisters, Bessie who is taking care of her stoke ridden father and ailing aunt; the other, Lee, who emotionally abandoned that part of her family because of issues she has with two sons of her own.  Both, though separated for over a decade, are brought together to deal with another family tragedy, that of the elder sister developing leukemia.   As the story unwinds, the focus shifts from illness to healing and how a family finds redemption in the face of death. 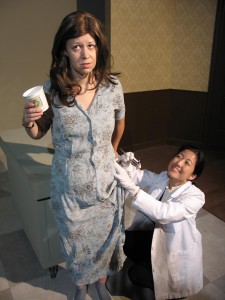 Amanda Hartley is a bit too young for the role of Bessie but gives  a mature performance especially in the second act as her health is in swift decline.  The play kicks in to high gear with the appearance of Elizabeth Morgan, who mixes humor with pathos as Lee, Bessie’s sister who put up emotional barriers that has destroyed all her relationships, including those of her own children, Hank and Charlie.  As Hank, Todd Aiello turns in the best performance of the play and commands very scene he is in.   Hank is always on the edge and Mr. Aiello balances these emotions in the most believable of ways.

The cast is rounded out by the always great Kate Kisner as Ruth who gives the dark script some levity.  Danny Mulae does fine work as Charlie, Hank’s younger brother who has emotional issues of his own.   By the end of this play the playwright’s theme of familial redemption comes through with resounding brilliance showing that Ms. Redmon and her fine cast have accomplished the truth of the piece.

Marvin’s Room plays through September 30, 2012 at the Circle Studio Theatre In Oak Park. Performances are Fridays and Saturdays at 8 p.m. and Sundays at 3pm. For tickets, call (708) 660 9540 or visit http://www.circle-theatre.org