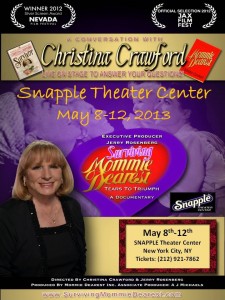 The show features an award–winning bio-pic documentary (that is not in distribution or available for sale- only available for viewing at the show) covering 100 years of show-biz history and details the turbulent relationship between Christina and her movie legend mother, Joan Crawford. Complete with film clips and footage from forgotten 1940’s home movies, SURVIVING MOMMIE DEAREST is slated for a limited run of 5 performances, during the week of Mother’s Day and will run off-Broadway at the Snapple Theater Center in Manhattan.

In addition to the Hollywood glitz and glamour of SURVIVING MOMMIE DEAREST, Ms. Crawford who wrote and narrates the documentary, recounts the abuse that she endured in her life, discusses her road to recovery, takes questions from the audience and closes the 90 minute show with a book signing. Also featured in the documentary is George Riddle, the star of Blood Country, which was recently awarded Best Film at the Toronto Film Festival. Music featured in the Documentary is by former American Idol David Hernandez. George Bugatti is musical director. Producers are, Jerry Rosenberg, A J Michaels, and Mommie Dearest, Inc.

Christina Crawford’s memoir, “Mommie Dearest” created a worldwide sensation and was published in seven foreign languages. Since then, she has written: Black Widow (a novel), Survivor, No Safe Place and Daughters of the Inquisition, in addition to publishing first the 20th Anniversary and then the 30th Anniversary Editions of “Mommie Dearest”, with updates and some revisions. The film of the same name was released in 1981 but without her participation in production or final approval. She has not received any royalty payments in the 30 years since the film was released.

Born in Hollywood, California and adopted by film star Joan Crawford, Christina Crawford was the focus of movie magazine photo shoots, press conference interviews and studio publicity. At ten years old she was sent to Chadwick School in Palos Verdes where she lived until she was fifteen and was transferred to Flintridge Sacred Heart in Pasadena from which she graduated at seventeen with honors. First to Carnegie Mellon in Pittsburgh as a Drama major and then to Neighborhood Playhouse in New York City, Ms. Crawford pursued her own acting career in theater. After an independent film in Miami, a small part with Elvis Presley in the film “Wild In The Country,” summer and winter stock performances, she did a co-starring role in the Chicago company of Barefoot In The Park for which she won the Sarah Siddons award for Best Young Actress. Ms. Crawford starred in the daytime soap opera “Secret Storm” in New York, in many nighttime TV shows in Los Angeles. After fourteen years as an actress, Christina returned to complete college, graduating Magna cum Laude from UCLA, and then a Masters Degree in Communication Management from the Annenberg School at University of California, after which she worked for the Getty Oil Company at their corporate headquarters. Since 1993, she has lived on over 100 acres in Northern Idaho where she initially owned a successful country inn, worked seven years as entertainment manager for the Coeur D’Alene Casino and produced her own regional weekly TV show that won three Telly Awards. She also served one term as County Commissioner. Christina is co-owner of the production “Surviving Mommie Dearest” which she wrote, co-directed and in which she currently stars.

She has served as appointed Commissioner on the first Lost Angeles County Commission for Childrens Services and has been given awards from the Illinois Governor, the California Attorney General and the United States Dept. of Children and Family Services for her work on behalf of public awareness regarding child abuse & family violence prevention.

The Snapple Theater Center is located at 1627 Broadway / 210 W. 50th St. near the corner of 50th Street and Broadway with two entrances, one on Broadway (stairs only) and one around the corner with an elevator.