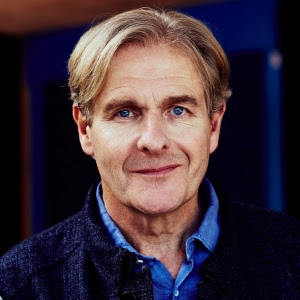 Called “the most insightful and engrossing new history play in decades” by The New York Times and “bracingly provocative and outrageously entertaining” by The Independent, Bartett’s compelling new comedy–drama blurs the line between truth and tragedy. In the aftermath of the death of England’s present-day monarch, Queen Elizabeth II, Prince Charles ascends to the throne. His first official act is to rubberstamp Parliament’s bill restricting freedom of the press, but Charles refuses in a provocative act of conscience. England is thrown into crisis, absurdly escalating with tanks guarding the palace gates. In the midst of plays for power, how will Charles rule over his once-united kingdom? Written in blank verse and sprinkled with rousing soliloquies and rhyming couplets, King Charles IIIinvokes the heightened stakes of Shakespeare’s greatest works in an inventive present-day setting.

Stage and screen actor Robert Bathurst makes his Chicago Shakespeare debut in the title role as the beleaguered monarch-to-be. He is best known to US audiences as Sir Anthony Strallan on the hit PBS series Downton Abbey, in which he appeared regularly throughout the first and third seasons. Throughout his distinguished 30+ year career, he has performed extensively at the National Theatre, on the West End and on tour, as well as at the Lyric Hammersmith, London Playhouse and Bath Theatre Royal. Among his many popular television and film roles, Bathurst has had leading roles in My Dad’s the Prime Minister, Coup!, The Stepfather, The Pillars of the Earth mini-series and the BBC adaptation of Jane Austen’s Emma. He stars in the cult classic series Cold Feet, which ran for five seasons 1997–2003—and reprises his role alongside the original cast in a sixth season this year.

Leading director of Broadway and Chicago stages, Gary Griffin returns to Chicago Shakespeare where, as Associate Artistic Director, he stages his twenty-third production. The ten-time Joseph Jefferson Award winner’s CST directing credits feature a diverse body of work spanning musicals (Gypsy, Road Show, Follies); Shakespeare plays (A Midsummer Night’s Dream, As You Like It); and modern classics (Private Lives, Amadeus). His landmark production of Pacific Overtures went on to the Donmar Warehouse in London, where it garnered the Olivier Award for Outstanding Musical Production and a nomination for Best Director. Griffin’s work has also been seen on Broadway in Honeymoon in Vegas, The Color Purple and The Apple Tree, as well as at Canada’s Stratford Festival and the Lyric Opera of Chicago.

Portraying members of the Royal Family, Jordan Dean and Amanda Drinkall make their Chicago Shakespeare debuts as Charles’s eldest son Prince William and his wife Kate Middleton, both set on carrying forward tradition. Dean has been seen on Broadway in American Psycho, Cat on a Hot Tin Roof and Mamma Mia!, and in Lincoln Center Theater’s Cymbeline. Drinkall has appeared on Chicago stages at Steppenwolf Theatre, the Goodman Theatre and Victory Gardens. Alec Manley Wilson portrays a conflicted Prince Harry who must find his role in the new family dynamics; he has previously appeared at American Repertory Theatre and Manhattan Theatre Club. Rae Gray—with credits at Steppenwolf Theatre, Goodman Theatre and on Showtime’s Shameless and HBO’s Boardwalk Empire—plays Jess, Harry’s working-class love interest who is met with disapproval from the Royal Family. Kate Skinner performs the role of Camilla; Skinner is a regular at Shakespeare Theatre Company in DC and has appeared on Broadway in The Graduate and Uncle Vanya. Sarah Chalcroft, recent London transplant to Chicago, makes an appearance as Princess Diana.

Costume Designer Mara Blumenfeld channels the real-life fashions of the British Royal Family, from highly ornamental state uniforms to the daily wear of Kate, Harry and William. Blumenfeld is a frequent collaborator with Griffin, having previously designed Road Show, Sunday in the Park with George and A Midsummer Night’s Dream at CST. Scenic Designer Scott Davis, along with Associate Scene Designer Alan Schwanke, creates a world that evokes the distinctive settings of the play—including Buckingham Palace, the British Parliament, and 10 Downing Street. King Charles III is Davis’ twenty-fifth production at Chicago Shakespeare, an extensive history that includes Tug of War: Foreign Fire and Civil Strife, Ride the Cyclone, Pericles and Road Show. Also on the award-winning design team are Lighting Designers Philip Rosenberg and Joel Shier and Sound Designers Rob Milburn and Michael Bodeen. King Charles III is Rosenberg’s 15th production, including recent designs for Othello, Henry V and Gypsy. Milburn and Bodeen have been collaborators for over thirty years, with joint credits on and off Broadway. The duo was recently awarded New York’s Lucille Lortel for Outstanding Sound Design in 2016. King Charles III marks the return of Wig and Make-Up Designer Richard Jarvie, who with this production takes over as Chicago Shakespeare’s resident Wig Master. Jarvie designed 28 productions in CST’s early history, most recently The Tempest in 2002. Jarvie has also worked extensively with Canada’s Stratford Festival, the Guthrie Theater and was with the Lyric Opera of Chicago for 28 years—11 of them as Wig Master and Make-up Designer. Rounding out the creative team is Assistant Director Lavina Jadhwani and Dialect Coach Eva Breneman.

For more information about the production, visit www.chicagoshakes.com/KingCharlesIII.

King Charles III will be performed at Chicago Shakespeare Theater November 5, 2016 – January 15, 2017. Tickets are on sale now for $48–$88 (subject to change). Special discounts are available for groups of 10 or more, as well as CST for $20 tickets available for patrons under 35.For more information or to purchase tickets, contact Chicago Shakespeare Theater’s Box Office at 312.595.5600 or visit the Theater’s website at www.chicagoshakes.com.

ABOUT CHICAGO SHAKESPEARE THEATER
Chicago Shakespeare Theater (CST) is a leading international theater company and recipient of a Regional Theatre Tony Award®. Under the leadership of Artistic Director Barbara Gaines and Executive Director Criss Henderson, CST is dedicated to creating extraordinary production of classics, new works and family programming; to unlocking Shakespeare’s work for educators and students; and to serving as Chicago’s cultural ambassador through its World’s Stage Series. Through a year-round season encompassing more than 650 performances, CST attracts 225,000 audience members annually. One in four of its audience members is under eighteen years old, and today its education programs have impacted the learning of over one million students. CST is proud to take an active role in empowering the next generation of literate, engaged cultural champions and creative minds. During 2016, CST has spearheaded the Shakespeare 400 Chicago festival in addition to announcing the creation of an innovative performance venue, The Yard at Chicago Shakespeare.