Chicago Shakespeare Theater’s SEUSSICAL Is Lightning In a Bottle 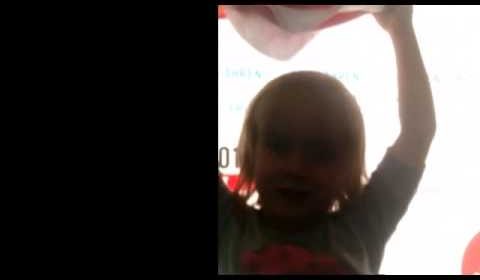 There is a truism, a catechism, “You cannot catch Lightning in a bottle.” What it means is there is genius but you cannot force it, you cannot recreate it. There was a man, a Doctor, a genius, mad? Yeah just enough. Dr. Seuss is of course whom we are talking about, and his genius has thrilled children for over 50 years, if your childhood didn’t include Green Eggs and Ham, The Cat in the Hat, Horton, or “Oh The Thinks You Can Think, then you had a sad childhood. Or you grew up in a cave.  His works have been reproduced in cartoon, feature length film, and always there is a conscious attempt to not only respect the patter and the lyrical nature of his works but also the slanted bubbly oddity of his environments. For those who have never seen a Seuss drawing, sad. It’s much like a bright, childish version of German expressionism in film.

The fact is Seuss’ is that genius that strikes like a bolt of lightning that strikes long enough to leave its mark then dissipates back into the ether. To recreate that on a stage? To put music to the familiar patter that is his style? Is to catch lighting in a bottle. It cannot be done. But it was, I know I saw it, and not only on stage; in my daughter’s eyes. Seussical The Musical, which is currently running at the Chicago Shakespeare Theater on Navy Pier through August 17th, is perhaps the only time in human history that lighting has been captured in a bottle. It Shines Brilliantly. I would take my daughter every day, if I could. Not just for the intrinsic entertainment of it, but for the lessons it teaches, oh I hope she sings these songs forever, and lets the thinks behind them sink in. Use your imagination, even in the face of a world that tries to keep you from it, always believe in yourself no matter how the world tries to tear you down, a persons a person no matter how small, say what you mean and do as you say, you don’t need to be physically beautiful by others opinion to be beautiful, oh Gertrude you are lovely with only one feather you are! All those lessons are there, and made so tangible for a young audience without even trying. In the big opening number it is sung out, “If you open your mind, oh the things you will find lining up to get loose.” Open your minds children, let’s think about Seuss. Because anything is possible. There is a reason, “Oh the places you’ll Go” is often quoted in commencement addresses at high school graduations.

If I haven’t convinced you your child needs to see this yet. Hold onto your hats, and your cats. Okay, So the Cat in the Hat, fills the role of Master Of Ceremonies, it would have been really easy if since you have a built in M.C. to just create a showcase, children’s cabaret experience giving each of the Beloved characters from the world of Seuss a number or two on stage, and it could have been good. No, the Creative team behind Seussical didn’t take the easy route, they spin the tale of Horton the Elephant, and manage to weave in the entire world of Seuss as they do. Even if it was with a quick aside, like a one fish, two fish, red fish, blue fish, sideways joke during an auction scene, they really do attempt to cram the entire world of Seuss into it, and do a pretty grand job. Narration is a difficult thing to pull off in a musical, and rare, I can in fact only think of two other instances of it, Joseph and the Amazing Technicolor Dreamcoat, and Little Shop of Horrors,  neither entirely family friendly.

The Cat pulls it off with, uhm, catlike grace. In fact that is what this show is a weaving of Seuss that displays catlike grace throughout. The Cat in the Hat played by Alex Goodrich, creates a fluid fourth wall, stepping in and out of the story to Narrate, and toss the adults in the audience, asides,  an occasional crack at the “Silliness” of the adult world, with cracks about the cost of parking at Navy Pier and other such things, or hammed up traffic reports,  then with little transition jumps right back to the story he is weaving for his Narration assistant JoJo played by Emily Chang, and wow does that young lady have an amazing future ahead of her, while her acting is a little stiff at times, her voice amazes on songs like “Alone in the Universe” and “Anythings Possible”. As a team these two weave the story of Horton the Elephant, played George Andrew Wolff; with the support of a doo-wop trio of bird back up singers, in beautiful feathered costumes.

The Tale of Horton, an elephant, who hears a cry for help from a speck of dust, upon which sits an entire world of people exists, the Smallest planet in the sky, ‘Who’. He sets about to save it despite the efforts of everyone else in the Jungle of Naboo to prove he is insane and destroy the speck of dust. Lead by the Sour Kangaroo, played by Lisa Estridge, whose voice was made for Gospel she’s got that ‘step out of the back of the chorus and knock you flat on your knickers,’ vocal quality. She leads the forest in a twisted effort to prove Horton is crazy and return the world to normality.  Even bringing Horton to trial and having Judge Myrtle the Turtle commit Horton to a home for the criminally insane.

Of course in the end – – – well if you don’t know the tale of Horton, his whose and his egg, then I wouldn’t want to spoil it for you, and seriously where did you grow up.  Let’s just say, the smallest of creatures are often the most important, The staging of the play is amazing fluid, the sets and lights are in constant motion, oh well, near constant there is always something happening, which keeps even the squirmiest kids fixated.

The two complaints I have, is one the costuming, the birds are awesome, but everyone else seems too human, with mayhap element of animal here and there. Let me use Horton as an example, he can hear the Who’s and no one else can because of his giant ears, but you gave him a baseball cap with little flaps to represent them.

Now to you Theresa Ham, (Costume Designer,) I know you don’t have a Disney sized budget, and I do not expect costumes like the puppet suits in the Lion King, but it seems your entire budget was spent on the bird costumes and Horton and the Cat in the Hat suffered for it. Sorry I am unimpressed by your work. I think you have it in you to do better work Mayzie’s Costume was amazingly perfect. I loved the Fish costumes as well.  However I don’t think you handle your resources well.  This however should not be a reason to not see the show, children will be fully into the world and not mind a minor thing like costuming. The overall production is amazing this is just a mention of the weakest link. The second complaint I have is the lack of intermission, like I said my daughter was fixated by the show. But even that cannot last if there is not a few moments to stretch and work off some energy.

The genius of Dr. Seuss will be one thing from the 20th century that will outlast all of us in 3000 years when the human race is sailing through the cosmos on interstellar voyages, there somewhere will be a mommy reading the words, “would you dare yank the tooth of a rink finker fink”  or, “ I would not could not with a fox, I will not, will not in a box,” to her belly as she rocks in a hover rocking chair, awaiting the delivery of even then the next generation of our kind. Because Seuss is magical, Seuss is genius, and Seussical the Musical has brought his genius to the stage, they’ve caught the lighting and placed it in the bottle. As JoJo sings from her Bathtub, “It’s possible, anything’s possible.” But don’t take it from me. Go see it, what do you think?