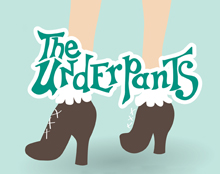 Steve Martin adapts Carl Sternheim’s 1910 comedy “The Underpants” bringing to life this farce mixed with meaningful social commentary. The setting is Dusseldorf. The action begins when Louise, a beautiful but neglected young wife, is attending the king’s parade and unexpectedly drops her drawers. Great concern overcomes her husband, Theo, as he fears a scandal and financial ruin. Yet, the incident attracts suitors to rent the spare room in their home while bringing underlying surprises of their own. The “underpants” bring fame and attention, but at what price? The New York Daily News says of the play, “Not since Monica Lewinsky’s thong almost toppled a presidency has a pair of panties caused such a national fuss.”

“From Lady Gaga to Madonna to Lindsay Lohan to Janet Jackson’s ‘wardrobe malfunction’ at the 2004 Super Bowl XXXVIII halftime show, our airwaves, web pages and newspapers are filled with accounts of people seeking fame with a touch of notoriety,” says director Barrett. “We all like to click our tongues with disapproval, yet we are intrigued and seek out more of what is entertainment…perhaps not so pure and but definitely simple. While this play gives our audiences the chance to reflect on this social phenomenon, it also provides a light-hearted two hours of madcap mayhem to make them smile and shake off the winter doldrums.”

Steve Martin is one of today’s most talented performers. He has had huge success as a film actor, with such credits as “Cheaper by the Dozen,” “Father of the Bride,” “Roxanne,” “Parenthood,” “L.A. Story” and many others. He has won Emmys for his television writing and two Grammys for his comedy albums. In addition to his bestselling novel “The Pleasure of My Company” and a collection of comic pieces, “Pure Drivel,” he has also written a play, “Picasso at the Lapin Agile,” which premiered at Chicago’s Steppenwolf Theatre Company in 1993. In 2002, he adapted the Carl Sternheim” play ‘Die Hose” or “The Underpants,” which ran Off Broadway at Classic Stage Company that same year.

Director Barrett is Associate Artistic Director of BTE. Her directing credits with BTE include last season’s acclaimed production of “Tuesday’s With Morrie.” Other BTE directing credits include “Private Lives” and “The Baltimore Waltz.” As a member of the acting ensemble, she was most recently been seen by BTE audiences in Eppie Lederer in “The Lady With All the Answers.” Other BTE acting credits include Charlotte in “Moon Over Buffalo” and Frankie in “Frankie and Johnny in the Claire de Lune.”

Buffalo Theatre Ensemble (BTE) presents “The Underpants,” by Carl Sternheim, adapted by Steve Martin, at the Building K Theatre, west of the intersection of Lambert Rd. and Fawell Blvd., on the northwest end of  College of DuPage Campus, 425 Fawell Blvd., Glen Ellyn, Ill. Jan. 18 – Feb. 3. A preview will be held Jan. 17. Press opening is Friday,

Buffalo Theatre Ensemble, under the direction of artistic director Connie Canaday Howard and associate artistic director Amelia Barrett is a professional Equity theater company in residence at the McAninch Arts Center at College of DuPage. It is rooted in the idea that an acting ensemble and company, who have a history of working together and have developed a sense of trust and community, can create better art.  It is committed to the American tradition of creating believable characters in the context of the production’s style. BTE’s 2012-2013  season includes David Rambo’s “The Lady with All the Answers” (Sept. 7 – 23), “The Underpants,” by Carl Sternheim, adapted by Steve Martin  (Jan. 18 – Feb. 3) and Christopher Trumbo’s “Trumbo-Red, White & Blacklisted”  (May 3 – 19).

The McAninch Arts Center at College of DuPage, located 25 miles west of Chicago near I-88 and I-355, houses three performance spaces, an art gallery and classrooms for the college’s academic programming.  This unique facility has presented theater, music, dance and visual art to more than 1.5 million people since its opening in 1986 and last year welcomed more than 75,000 patrons from the greater Chicago area. The MAC began major renovations in fall 2012 that will update the major performance spaces, address significant infrastructure needs and improve several academic program areas. Scheduled completion date is spring 2014. The project will cost $35 million and is funded by the $168 million referendum that voters of District 502 passed in November 2010. Other projects beginning this year include the renovation of the Physical Education Center, Student Resource Center and Seaton Computing Center, and construction of the Campus Maintenance Center. The mission of the McAninch Arts Center is to foster enlightened educational and performance opportunities, which encourage artistic expression, establish a lasting relationship between people and art, and enrich the cultural vitality of the community. For more information visit www.AtTheMAC.org