Brown Paper Box Co.’s summer production of Now. Here. This. is currently up and running at the Rivendell Theatre in Chicago’s Edgewater neighborhood. The show openedSaturday, July 23, and runs Thursdays through Saturdays at 7:30 PM, and Sundays at 2:00 PM through August 21 at Rivendell Theatre (5779 N. Ridge Avenue). Ticketing information and more information can be found at www.BrownPaperBox.org.

From the award-winning writing team that brought you [title of show], Now. Here. This. – in its first production in or around Chicago – is a new musical tackling life’s big questions with humor and humanity. In its Chicago premiere, the show follows the evolution and adventures of four friends in a natural history museum as they journey through time – from the present day museum, to their formative pasts, and back again. Inspired by various exhibits, the foursome share stories about friendship, hoarding, roller coasters, dying, middle school, and Archer the security guard in an attempt to step from the past into that elusive present moment…into the Now. Here. This.

“The chance to follow up [title of show] with Now. Here. This. is an amazing opportunity which timed itself out perfectly,” says director M. William Panek. “Not only did we want to recreate 2015’s excitement with this special opportunity, but we also wanted to highlight the writers’ collaborative nature with designers and actors who really have a handle on who these people are. I’m thrilled to see how these artists have grown, and welcome new faces on the journey – both onstage, backstage, and in the audience!” 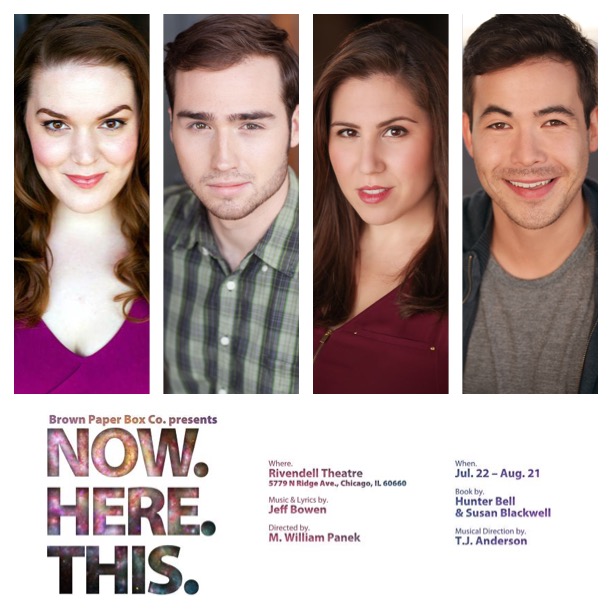 Now. Here. This. is made possible in part by The Saints.

Brown Paper Box Co. creates challenging and inspiring theatre that focuses on the text. By employing a smart, simple aesthetic in intimate spaces, we connect audiences directly to the heart of the story. For more information, please visit www.BrownPaperBox.org.