Broadway In Chicago is thrilled to announce its next season will feature the Pre-Broadway premiere PARADISE SQUARE, along with Rodgers & Hammerstein’s OKLAHOMA!, HAIRSPRAY, HADESTOWN, Harper Lee’s TO KILL A MOCKINGBIRD, and AIN’T TOO PROUD.The off-season specials will include: THE PLAY THAT GOES WRONG, MYSTERY SCIENCE THEATER 300 LIVE, THE PROM, JERSEY BOYS, FIDDLER ON THE ROOF, and DR. SEUSS’ HOW THE GRINCH STOLE CHRISTMAS! THE MUSICAL.

Current subscribers can now renew by visiting BroadwayInChicago.com or calling (312) 977-1717. New subscriptions will go on sale to the public on Wednesday, September 8. Subscriber benefits include savings of up to 58% off ticket prices this season, discounts on both parking and suite service, invitations to Broadway In Chicago exclusive events, free exchange privileges based on availability and more. 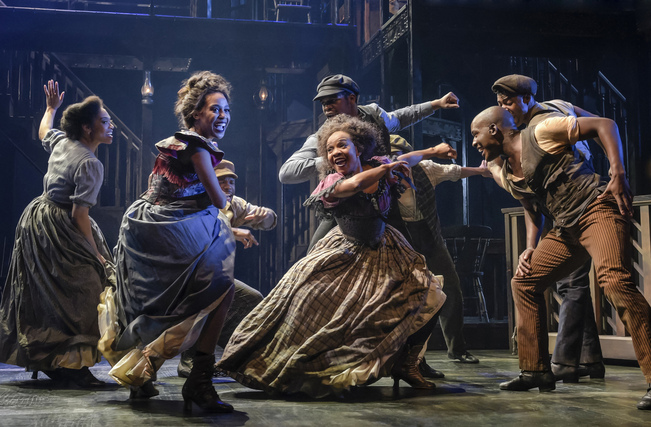 The creators of such landmark shows as Ragtime, Spring Awakening, The Laramie Project and Beautiful: The Carole King Musical bring PARADISE SQUARE to Chicago for a strictly limited engagement, prior to Broadway. New York City. 1863. The country is divided over immigration, racial tensions, and political ideology. The chaos of the Civil War rages on in the heart of the Five Points slum. But in this neighborhood, something extraordinary is occurring. Free born Blacks and those who escaped slavery are living, working, and intermarrying with newly arrived Irish immigrants. A new music and dance flourishes. A new culture is created from an accidental society. 2021 Tony Award nominee Joaquina Kalukango (the star of last year’s Broadway hit Slave Play) leads the dynamic cast of this timely and compelling new musical.

“How is it that the coolest new show on Broadway is a 1943 musical?” says The New York Times. This is Rodgers & Hammerstein’s OKLAHOMA! as you’ve never seen or heard it before—reimagined for the 21st century, and now the Tony Award Winner for Best Revival of a Musical. Funny and sexy, dark and jolting, “this production shocked me and moved me. This is the OKLAHOMA! that was there all along.” raves New York Magazine. Direct from an acclaimed run on Broadway, Rodgers & Hammerstein’s OKLAHOMA! “lets us experience Rodgers and Hammerstein’s greatness anew.” (The New Yorker).

You Can’t Stop the Beat! HAIRSPRAY, Broadway’s Tony Award-winning musical comedy phenomenon is back on tour! Join 16-year-old Tracy Turnblad in 1960’s Baltimore as she sets out to dance her way onto TV’s most popular show. Can a girl with big dreams (and even bigger hair) change the world?   This all-new touring production will reunite Broadway’s award-winning creative team led by Director Jack O’Brien and Choreographer Jerry Mitchell to bring HAIRSPRAY to a new generation of theater audiences. Don’t miss this “exhilaratingly funny and warm-hearted musical comedy” (The New Yorker). www.hairspraytour.com 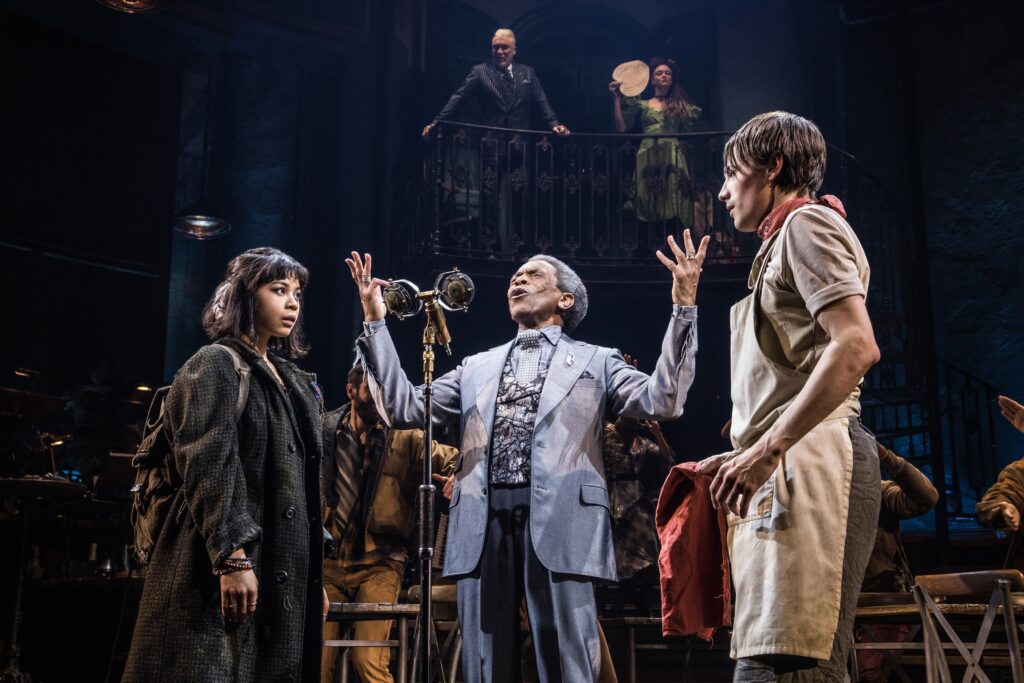 COME SEE HOW THE WORLD COULD BE. Welcome to HADESTOWN, where a song can change your fate. Winner of eight 2019 Tony Awards® including Best Musical and the 2020 Grammy® Award for Best Musical Theater Album, this acclaimed new show from celebrated singer-songwriter Anaïs Mitchell and innovative director Rachel Chavkin (Natasha, Pierre & The Great Comet of 1812) is a love story for today… and always. Intertwining two mythic tales — that of young dreamers Orpheus and Eurydice, and that of King Hades and his wife Persephone — HADESTOWN is a haunting and hopeful theatrical experience that grabs you and never lets go.

All rise for Academy Award® winner Aaron Sorkin’s adaptation of Harper Lee’s Pulitzer Prize-winning masterwork. The New York Times Critic’s Pick TO KILL A MOCKINGBIRD is “the most successful American play in Broadway history. It has not played to a single empty seat” (60 Minutes). Rolling Stone gives it 5 stars, calling it “an emotionally shattering landmark production of an American classic,” and New York Magazine calls it “a real phenomenon. Majestic and incandescent, it’s filled with breath and nuance and soul.” With direction by Tony Award® winner Bartlett Sher, TO KILL A MOCKINGBIRD — “the greatest novel of all time” (Chicago Tribune) — has quickly become “one of the greatest plays in history” (NPR).

AIN’T TOO PROUD – The Life and Times of The Temptations is the electrifying new smash-hit Broadway musical that follows The Temptations’ extraordinary journey from the streets of Detroit to the Rock & Roll Hall of Fame. Nominated for 12 Tony® Awards and the winner of the 2019 Tony Award for Best Choreography, it’s a thrilling story of brotherhood, family, loyalty, and betrayal during a decade of civil unrest in America. Set to the beat of the group’s treasured hits, including “My Girl,” “Just My Imagination,” “Get Ready,” and “Papa Was a Rolling Stone,” AIN’T TOO PROUD tells the unforgettable story of the legendary quintet that Billboard Magazine named the greatest R&B group of all time.

OFF-SEASON SPECIALS WILL INCLUDE:
Additional shows, which will be available as off-season specials for subscribers, include:

THE PLAY THAT GOES WRONG
Dec. 7, 2021 – Jan. 30, 2022
Broadway Playhouse at Water Tower (175 E. Chestnut)
What would happen if Sherlock Holmes and Monty Python had an illegitimate Broadway baby? You’d get THE PLAY THAT GOES WRONG, Broadway & London’s award-winning smash comedy! Called “A GUT-BUSTING HIT” (The New York Times) and “THE FUNNIEST PLAY BROADWAY HAS EVER SEEN” (HuffPost), this classic murder mystery is chock-full of mishaps and madcap mania delivering “A RIOTOUS EXPLOSION OF COMEDY” (Daily Beast). Welcome to opening night of The Murder at Haversham Manor where things are quickly going from bad to utterly disastrous. With an unconscious leading lady, a corpse that can’t play dead, and actors who trip over everything (including their lines), it’s “TONS OF FUN FOR ALL AGES” (HuffPost) and “COMIC GOLD” (Variety) – sure to bring down the house!

Mystery Science Theater 3000 LIVE
December 11, 2021
CIBC Theatre (18 W. Monroe)
Following the wildly successful “Watch Out for Snakes! Tour” in 2017, the “30th Anniversary Tour” in 2018, and “The Great Cheesy Movie Circus Tour” in 2019, Mystery Science Theater 3000 LIVE is launching the next all new production to hit the road! Join host Emily Connor (Emily Marsh) and the world’s greatest – and only – movie riffing robots, Tom Servo (Conor McGiffin), Crow (Nate Begle), and GPC (Yvonne Freese), as they take you on an exhilarating rollercoaster ride through the film Making Contact, imposed by Mad Scientist, Mega-Synthia (Yvonne Freese). Now you can sit in the same theater with your favorite characters and experience this long running comedy phenomenon in a universally-acclaimed LIVE event.

The GRINCH is the record-setting Broadway holiday sensation which features the hit songs “You’re A Mean One Mr. Grinch” and “Welcome Christmas” from the original animated special. Max the Dog narrates as the mean and scheming Grinch, whose heart is “two sizes too small,” decides to steal Christmas away from the Holiday loving Whos. Magnificent sets and costumes inspired by Dr. Seuss’ original illustrations help transport audiences to the whimsical world of Whoville and helps remind us of the true meaning of the holiday season. Don’t miss what The New York Times calls “AN EXTRAORDINARY PERFORMANCE! 100 times better than any bedtime story.” 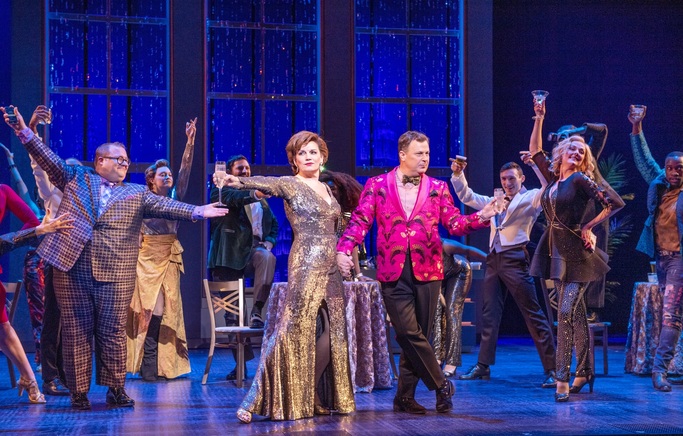 They were just four guys from Jersey, until they sang their very first note. They had a sound nobody had ever heard… and the radio just couldn’t get enough of. But while their harmonies were perfect on stage, off stage it was a very different story — a story that has made them an international sensation all over again. Go behind the music and inside the story of Frankie Valli and The Four Seasons in the Tony and Grammy Award®-winning true-life musical phenomenon, JERSEY BOYS. From the streets of New Jersey to the Rock and Roll Hall of Fame, this is the musical that’s just too good to be true.

Tony®-winning director Bartlett Sher and the team behind South Pacific, The King and I and 2017 Tony-winning Best Play Oslo, bring a fresh and authentic vision to this beloved theatrical masterpiece from Tony winner Joseph Stein and Pulitzer Prize winners Jerry Bock and Sheldon Harnick. The original production won ten Tony Awards, including a special Tony for becoming the longest-running Broadway musical of all time. You’ll be there when the sun rises on this new production, with stunning movement and dance from acclaimed Israeli choreographer Hofesh Shechter, based on the original staging by Jerome Robbins. A wonderful cast and a lavish orchestra tell this heartwarming story of fathers and daughters, husbands and wives, and the timeless traditions that define faith and family. Featuring the Broadway classics “Tradition,” “If I Were a Rich Man,” “Sunrise, Sunset,” “Matchmaker, Matchmaker” and “To Life,” FIDDLER ON THE ROOF will introduce a new generation to this uplifting celebration that raises its cup to joy! To love! To life!

ABOUT BROADWAY IN CHICAGO
Broadway In Chicago was created in July 2000 and over the past 21 years has grown to be one of the largest commercial touring homes in the country. A Nederlander Presentation, Broadway In Chicago lights up the Chicago Theater District entertaining more than 1.7 million people annually in five theatres. Broadway In Chicago presents a full range of entertainment, including musicals and plays, on the stages of five of the finest theatres in Chicago’s Loop including CIBC Theatre, James M. Nederlander Theatre, Cadillac Palace Theatre, and just off the Magnificent Mile, the Broadway Playhouse at Water Tower Place and presenting Broadway shows at the Auditorium Theatre.

Broadway In Chicago is looking forward to October 5 when we reopen our theatres. In addition to planning the return of fabulous Broadway shows, our vaccinated staff has been working diligently to ensure that the return to our theatres will be safe and inviting. Broadway In Chicago has enhanced the air handling and filtration throughout the theatres, incorporated new sanitation technologies, and has reduced all touchpoints including initiating mobile ticketing and arranging for mobile Playbills to be available. Our theatres will operate at 100% capacity; as such, staff and audience will be required to wear masks just as they are required for public transportation. Additional requirements may be considered and added, such as proof of vaccination for those 12 and older. As we are not opening our doors until October 5, Broadway In Chicago will continue to evaluate all protocols to conform to all Federal, State, and Local requirements and follow changing rules and guidelines as they evolve for the safety of our patrons. For the most up-to-date protocols, visit BroadwayInChicago/Covid19