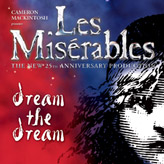 Cameron Mackintoshpresents LES MISÉRABLES, with glorious new staging and dazzlingly reimagined scenery inspired by the paintings of Victor Hugo. This new production has been acclaimed by critics, fans and new audiences and is breaking box office records wherever it goes.

The New York Times calls this LES MISÉRABLES “splendidly reworked, thrilling and unforgettable. An unquestionably spectacular production from start to finish.” The London Times hails the new show “a five star hit, astonishingly powerful.”Chris Jones with the Chicago Tribune raves this production of LES MISÉRABLES is a “grand theatrical sweep for a new generation of fans.”

Based onVictor Hugo’s classic novel, LES MISÉRABLES is an epic and uplifting story about the survival of the human spirit. The magnificent score of LES MISÉRABLES includes the classic songs “I Dreamed a Dream,” “On My Own,” “Stars,” “Bring Him Home,” “Do You Hear the People Sing?,” “One Day More,” “Empty Chairs at Empty Tables,” “Master Of The House” and many more.

PERFORMANCE SCHEDULE
The performance schedule for LES MISÉRABLES is as follows: