“Only heaven knows how glory goes; What each of us was  meant to be”.  That manifest destiny is what our doomed cave explorer ponders in Bohemian Theatre Ensemble’s majestic new production of Floyd Collins, the 1996 musical written by Steppenwolf’s Tina Landau and Adam Guettel (The Light In The Piazza).

Based on true events, Floyd Collins was a Kentucky cave explorer who in January of 1925,  became entrapped 150 feet underground and ultimately perished more then two weeks later.  The  musical recounts how the attempted rescue  became  a nationwide media circus– the first of its kind in America, and was the third largest news story between the World Wars.  More interestingly, the play also focuses inward on Floyd and his relationship with his family including a tyrannical father, a brother who wants nothing more than to leave the family behind and a sister, who is mentally frail but who has nothing but love for her brother.

The play opens with Collins  planning to make his fortune by opening a cave for tourists to visit.  He strikes a deal with some local farmers whose land the cave encroaches upon and in exploring a remote shaft, becomes trapped.   After a newspaper reporter, Skeets Miller (Greg Foster) files the story on Collins, the media descends en masse, on the rural town.   A mirror is held up to their society and conflict soon arises on how to best rescue Collins.   Ego’s are inflated and what is in the best interest of our victim is soon eclipsed as people’s own self interest  take hold in the media spotlight .   The story grows larger each day making  Collins’  a national celebrity.  However, as his fame increases in the outside world,  Floyd becomes more introspective as his body grows weaker and weaker.  This counterpoint in the narrative gives the musical its center.   Floyd is able to reconcile himself to his fate, and the piece ends as he, much like a child, asks God what heaven is like, finally questioning “Will my mother be there waiting for me?” 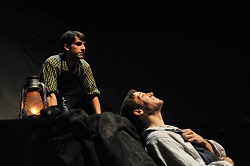 Director Peter Marston Sullivan has given us an epic and poignant  Floyd Collins and will surely be regarded as one of Boho’s greatest achievements.

Sullivan has brought together a cast that works as a seamless unit.  As the title character, Jim DeSelm is sensational.   From his first entrance,  DeSelm instantly connects with the audience on a visceral level and never lets go untill the final scene.  Equally as engaging is Jon Harrison as Floyd’s brother Homer.  It is Harrison and DeSelm’s scenes together that give this production its emotional wallop.

This production also benefits from Alan Bukowiecki’s masterful musical direction of Adam Guettel’s difficult score which is at times very dissonant. Every lyric is understandable and every harmony is spot on.  The choral numbers can glue you to the back of your seat and then at the next moment, bring a tear to your eye.  The orchestrations leave nothing wanting and at the performance I attended, conductor Allison Hendrix kept perfect balance of the orchestra’s sound, never drowning out the cast.

All other aspects of this production come together seamlessly. Christopher Kriz’ sound design  makes you feel the vastness of the cave  through echos,  and Diane D. Fairchild’s set and lighting design give the cast a perfect place to tell Collin’s tale.