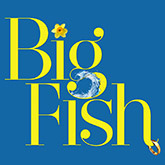 BIG FISH, a new musical based on the novel by Daniel Wallace and the 2003 Columbia Pictures film written by John August, will star Norbert Leo Butz as Edward Bloom, and have its pre-Broadway world premiere at Chicago’s Oriental Theatre (24 West Randolph Street) in a limited 5-week engagement beginning performances Tuesday, April 2, 2013, opening Sunday, April 21, 2013, and playing through Sunday, May 5, 2013. Tickets on sale Monday, February 4, 2013.

A rollicking fantasy set in the American South, Big Fish centers on the charismatic Edward Bloom, whose impossible stories of his epic adventures frustrate his son Will. As Edward’s final chapter approaches, Will embarks on his own journey to find out who his father really is, revealing the man behind the myth, the truth from the tall tales. Overflowing with heart, humor and inventive stagecraft, Big Fish is an inspirational tribute to the power of family, dreaming big and the unpredictable adventure of life itself.

Julian Crouch (Scenic Design). On Broadway Mr. Crouch designed and c0-directed The Adams Family (Drama Desk, Outer Critics Circle Awards). With Phelim McDermott, he recently designed and associate directed Philip Glass’ Satyagraha, in collaboration with the English National Opera and the Met, as well as the Met’s 125th Anniversary Gala. As co-founder of London’s Improbable Theatre with McDermott, the two collaborated on the international sensation Shockheaded Peter. Other Improbable productions include Animo, 70 Hill Lane, Lifegame, Coma, Spirit, Sticky, Cinderella, The Hanging Man, Stars Are Out Tonight and The Wolves in the Walls. Designs include Dr. Faustus, Improbable Tales, The Servant of Two Masters, The Hunchback of Notre Dame, Jerry Springer: The Opera, A Funny Thing Happened on the Way to the Forum and Dr. Atomic at the Met. He is designing the set and costumes for Christopher Wheeldon’s Cinderella (Dutch National and San Francisco Ballets).

William Ivey Long (Costume Design) Broadway credits include Rodger & Hammerstein’s Cinderella, The Mystery of Edwin Drood, Don’t Dress for Dinner, Leap of Faith, Hugh Jackman: Back on Broadway, Catch Me If You Can, Chicago (now in its 17th year), Grey Gardens, The Boy From Oz, Little Shop of Horrors, Hairspray, The Producers, The Music Man, Contact, Cabaret, Smokey Joe’s Café, Guy and Dolls, Crazy for You, Six Degrees of Separation, Lend Me A Tenor, Nine and the upcoming Cinderella and The Mystery of Edwin Drood. Mr. Long has 11 Tony Award nominations, winning five times. In January 2006, he was inducted into the Theatre Hall of Fame.