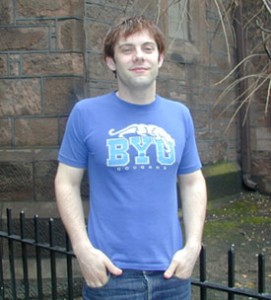 Damon Intrabartolo, who co-wrote the coming-of-age pop musical bare –telling the story of two boys who fall in love in a Catholic boarding school and forced to lives their lives in the shadows , died on Aug. 13 in Arizona.

Damon was instrumental in helping bring bare to Chicago in 2007 at Bailiwick where is yearned rave reviews and remained one of his favorite production of his material.   I am at a loss on what to say about my friend, other than he was prolific, kind, funny and charitable.

orn in New Jersey, Intrabartolo attended the University of Southern California. He has collaborated with John Ottman for more than a dozen years, orchestrating and conducting films including “X2: X-Men United” “Hide And Seek” and “Superman Returns.”

Film fans may remember seeing Intrabartolo in the 2001 documentary, “On The Bus,” about six gay men attending the Burning Man festival in the desert.

Here are some news clips from our production as well as some videos from the iconic first staging of bare off-Broadway.

Chicago’s Bailiwick Has Its Cast for ‘bare’

The Jon Hartmere and Damon Intrabartolo musical had a West Coast run and then a 2004 Off-Broadway production that was poised to be expanded for a larger life in Manhattan, but producers’ plans did not pan out. A three-disc studio-cast album of the show’s score will be available Oct. 20. Visit www.barethealbum.com.The property, which overflows with all the confusion, hormones, aches, pains and joys of being 16 (and raised in a repressed environment) is now licensed through Theatrical Rights Worldwide (www.theatricalrights.com) and is expected to have a wide life in regional and university theatre.

Observers of the show in New York in 2004 called the score melodic and crafty, full of genuine rock, and likely to please the crowds who grew up on Rent. With the collapse of a commercial plan for bare in New York, the next rock youthquake show to make an impact both Off-Broadway and on would be 2006-07’s Spring Awakening.

The musical director is James Morehead, with assistance from Robert Ollis. Christie Kerr will choreograph.

According to Bailiwick, bare – yes, the writers prefer the title to be in all-lowercase letters – is a dramatic musical set in a Catholic boarding school and “exploresthe impact of family and the church on American youth. Peter and Jasonfind joy and young love in each other’s companionship, but their lovehas to be kept secret. When their first kiss is witnessed by another boy at school and their affair becomes public, a complex series of events spins their lives out of control. This groundbreaking work, originally billed as a ‘pop opera,’ deals with such pertinent topics as teenage drug use, teen pregnancy, confused sexuality and pressures from family and institutionalized religion.”

Founded in 1982, Bailiwick Repertory is dedicated to “reflecting on ourstages the diversity of our world in works ranging from classics to world premieres. Our Primary Series features plays and musicals – many by Chicago authors – appealing to the traditional theatregoer, while our Community Based Initiatives – Pride Series, Directors Fest, Summer Youth Initiative, and Second Sex Series featuring women in prominence – develop new artists and audiences. Bailiwick has earned over 150 Jeff Recommendations and Citations, including Best MusicalAwards for the last three seasons for the world premiere of Dr. Sex, the Chicago premiere of Parade and a revival of Kiss of the Spider Woman.