bare (formally known as bare: A Pop Opera) has been an underground hit for years that hip, young theatre lovers could watch clips from on YouTube. bare ran at the Hudson Theatre in Los Angeles, California from October 2000-February 25, 2001 and the New York production of bare, at the American Theatre of Actors, off-Broadway from April 19- May 27, 2004. Both the Los Angeles production and the New York production were directed by Kristin Hanggi.

Michael Arden starred as Peter in the original off-Broadway hit production, in a breakout performance for the young actor (Michael Arden is now a “go-to” tenor in New York). As the show was transferring to the new Dodger Stages, last minute financial problems caused the show never to open and bare sat in limbo for years with only video clips and an eleven song CD of selected vocal performances circulating in small numbers. 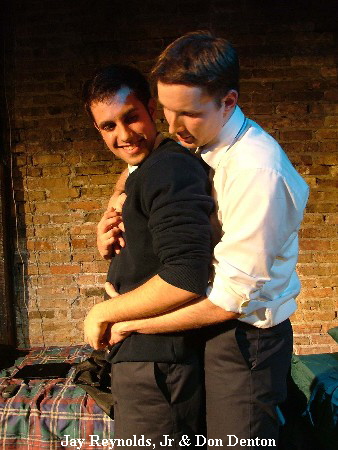 As with Jerry Springer, the Opera, bare the musical needed the rights to the performance to be negotiated (by former Bailiwick board member, Michael J. Roberts) who coincidentally had brought bare to the attention of David Zak and the board. It’s been a very good year for theatre at the Bailiwick.

From there, Zak assembled a young cast of performers to step into the parts of this little known musical about growing up and finding out what it’s like to have questions about one’s sexuality in a less than tolerant environment.

Hiding their relationship from their peers at the Catholic school they attend, Peter and Jason, played by Jay Reynolds, Jr. and Don Denton, find their secret revealed after experimenting with club drugs, and publicly exploring their feelings, not only with each other, but with Ivy whose persistent crush on Jason leads to a tryst.

Kristin Johnson, who plays Ivy, brings a natural quality to the stage that at times reminds you of Kirsten Dunst as she performs. Her voice is perfect for the moments when Ivy needs to move the audience with her story.

Other standout performances from the cast come from Michele Cason as Sr. Chantelle and Kathleen Gibson who plays Jason’s sister Nadia. These two young women take over the stage when it’s their turn to shine, and they don’t disappoint. When we get to meet Peter’s mother Claire, played by Nancy Kolton, we get to feel the upset and pain of a mother who hasn’t yet come to terms with whom her son really is in a heart wrenching performance of “Warning.”

Among the boys, Reynolds, Denton, and Courtney Crouse, who plays Matt, have some high harmonies and solos to perform which can be impressive. Denton’s Jason becomes more developed as the performance gets going and Reynold’s brooding Peter finds his answers as Jason bares his soul.

Damon Intrabartolo, who is best known for his collaboration with film composer John Ottman (and together have composed music for Superman Returns, X-Men 2, Usual Suspects and Fantastic Four) composed/co-authored bare with lyricist Jon Harmere. Together, they have created a trove of memorable songs that are at times infectious and at other times stirring. A complete CD of bare the musical is now available at http://www.barethemusical.com.