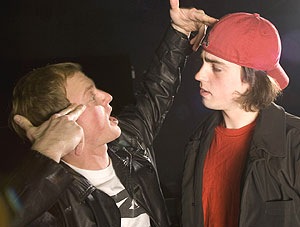 Columbinus isn’t an easy show to watch. Part play, part stage documentary, this recently revised show runs a wild gamut of emotions — nearly indistinguishable waves of shock, terror, despair and even humor are all accounted for. But Director P.J. Paparelli’s isn’t in it to stage a quiet retelling of our country’s most infamous school shooting. Instead, he employs a variety of techniques — choral speaking, monologues, deafening sound effects, music and multimedia — to thoroughly examine the tragedy at Columbine High School.

Paparelli takes us into the lives of everyday high schoolers. They’re painted in broad strokes as jocks, goths, nerds, pretty girls, super-Christians and the like, but they represent all-too-real characteristics that no teenager can truly escape. We see with crushing reality how arbitrarily the tormentors become the tormented, like the confident cool kid hiding his homosexuality or the studious teacher’s pet who secretly wonders if he’s missing the point. And then we have the so-called loners, the freaks. It’s safe to say that Eric Harris and Dylan Klebold were more than just misunderstood, but Columbinus shows them as lonely, angry teenagers in a time before the world knew them as attempted mass-murders.

Amid such calamity and high-stakes emotion, a show like Columbinus would be hard to stage without the right cast. Luckily, the ensemble members taking the stage at the American Theater Company are a wholly talented bunch. Many cast members take on multiple roles, ranging from high school students to educators, parents and community members. Much of the dialogue was taken from real interviews the creative team conducted with Littleton residents, and we’re fed those bits in quick, gut-wrenching asides. Matthew Bausone and Eric Folks, who play Harris and Klebold, respectively, are a formidable joint force, feeding off each other’s rage and blind hatred.

A military kid constantly uprooted from school to school, Bausone makes us feel Harris’s raw anger after being bullied for a chest deformity and a locker full of anti-depressants. When he befriends Harris, Klebold’s severe brand of teenage apathy comes to a full-boil. The quietly powerful set, complete with a large, multi-functional chalkboard, belies the complex rage lurking in both of them. And when that dreadful scene comes, the one you know you won’t be able to avoid in a play about Columbine, it’s achingly hard to watch.

But the play doesn’t end there. The entire third act is dedicated to those left suffering in the aftermath of tragedy. We hear from the principal, a cop, the locals who are still stung with disbelief. But most importantly, we get a glimpse of the survivors one, five, ten years down the road. It’s a compelling memorial for not only the victims, but those who survived and attempt to continue on with their lives. If you can stomach a return to those emotions you felt on April 20, 1999 — or more recently in the wake of the Aurora and Newtown shootings — Columbinus is a shocking but potent testament to the healing power of art.