Move over Wicked, your grand old, much beloved predecessor has arrived and is ready to prove that there is no place like home. The Wizard of Oz is back on stage with a revival that nicely balances the well known classic material with some modern updates to make it hip and fun for a whole new generation.  This reimagined production which opened last night at the Cadillac Palace, is the brainchild of Andrew Lloyd Webber who for many years wanted to do a remount of the show. The search to cast Dorothy resulted in a highly rated British television reality competition show “Over The Rainbow” hosted by Graham Norton.

With additional songs penned by long ago collaborator Tim Rice and the original Phantom Michael Crawford returning to the stage as the title character, The Wizard of Oz opened to both a huge advance and positive reviews. A Canadian production/tour was soon announced using the same television reality model to find their Dorothy with Danielle Wade winning the popular competition series.

Though the new US tour may not have the star power of Michael Crawford, it is in every way shape and form as good as its British counterpart.  Beautifully directed Jeremy Sams, this version of The Wizard of Oz is faithful to the both the Frank Baum’s book and the beloved film while still letting the actors tasked to tackle these iconic roles with some wiggle room to leave their own mark on the characters. 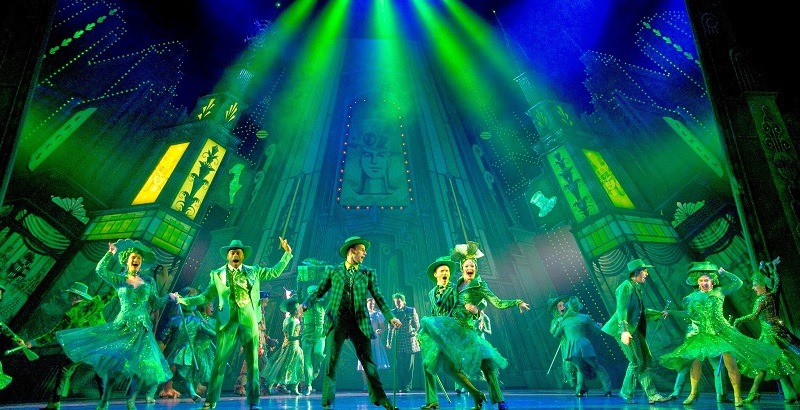 Danielle Wade is an outstanding Dorothy who perfectly balances memories of Garland with a feisty new no-nonsense take on the character.   She is surrounded by a trio of actors that each bring a multitude of humanity to their roles. Jamie McKnight makes you instantly fall in love with his Scarecrow.  His line phrasing coupled with athletic yet graceful dancing is pure gold to watch. Mike Jackson is by far the sexiest Tin Man to fill the metal suit (strange I know, but trust me on this one), and contains a beautifully crisp baritone voice; while Lee MacDougalle’s Cowardly Lion is more Albin than Lahr making his queen of the jungle comic gold and his one liners worth the price of admission.

With Wicked re-imagining and redefining the character study of the Witches of Oz, it was great to see these ladies in their original form and both Robin Evan Willis’ Glinda and Jacquelyn Piro Donovan’s Wicked Witch are sensational.   In fact Ms. Willis had the audience in tears singing a new Webber/Rice song “Already Home”. Broadway stalwart Jay Brazeau is a fine Wizard and better Professor Marvel, who gets another new song “Wonders of the World” and sells it fantastically.

Sir Andrew’s respect for the original is clear as he has adapted the Baum material with director Sams.  His new songs are placed in such a away as to never take away from the well-known original score by Harold Arlen and E.Y. Harburg, which are all in tact.  Over The Rainbow, Ding Dong The Witch Is Dead, Off To See The Wizard, If I Only Had A Brain and the like, are all in presented in pristine form by this talented cast.

The audience for the opening night was mixed with different generations, but in the end it was very noticeable that is was the adults who were most moved by this production, myself included.   The Wizard of Oz proves timeless in every way and touches on a theme that will forever bring a tear when we remember home.  As we age and loose our parents, as we then become parents and go through this circle of life, Dorothy’s cry is one that is heard and understood around the world.  There is no place like home.