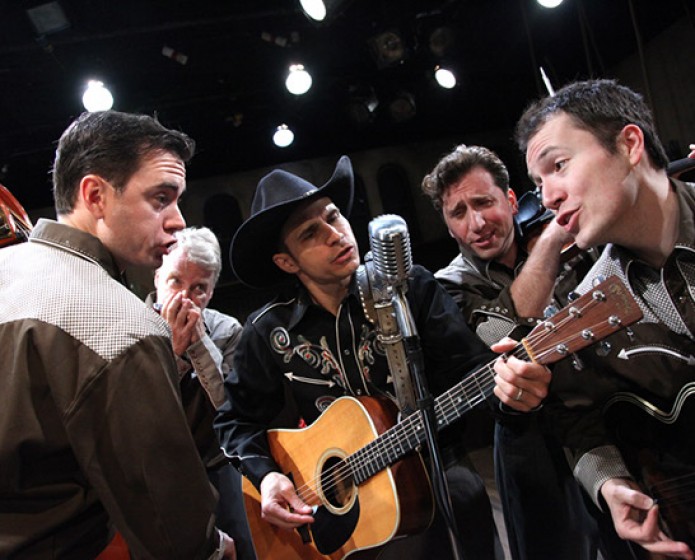 Producing Artistic Director Gwendolyn Whiteside and American Blues Theater, Chicago’s second oldest Equity ensemble, are proud to announce the extension of  American Blues Theater’s Hank Williams: Lost Highway, by Randal Myler and Mark Harelik, directed by Damon Kiely, music director Malcolm Ruhl and starring Matthew Brumlow as “Hank Williams,” throughSunday, September 28, at the Greenhouse Theater Center’s Downstage Mainstage Theater, 2257 N. Lincoln Ave. Tickets are $29 Wednesdays – Fridays and $39 Saturdays and Sundays. The performance schedule is Wednesday – Saturday at 7:30 p.m. and Sunday at 2:30 p.m. with added Wednesdaymatinees September 10 and 17 at 2 p.m. Note: there is no Wednesday at 7:30 p.m. performance September 10 or 17.  Tickets are on now on sale at 773.404.7336 or  AmericanBluesTheater.com.

Hank Williams: Lost Highway opened August 30, 2013 to unanimous raves from critics and sold-out houses at the Greenhouse Theater Center. This summer the musical biography of one America’s legendary singer-songwriters returns for a limited run.  The tribute chronicles Williams’ rise from humble beginnings in Louisiana to his triumphs on the Grand Ole Opry stage and becoming one of the great innovators of American music to his self-destruction at the age of twenty-nine. Hank Williams: Lost Highway includes more than 20 Williams’ classics, including “I’m So Lonesome I Could Cry,” “Move It on Over,” “Hey, Good Lookin’” and “Jambalaya.”

Since 2009, American Blues Theater offers free opportunities for audiences and fans of the theater to learn more about the current presentation. All Town Halls are held immediately following thatSunday’s 2:30 p.m. performance, August 3 – 24.

American Blues Theater is proud to continue Pink Previews for this production. Proceeds from preview performances are donated to the Lynn Sage Foundation for breast cancer research.  In addition, American Blues Theater with its production of Hank Williams: Lost Highway raises public awareness of several organizations including Old Town School of Folk Music.

Randal Myler has received two Tony Award-nominations (Best Musical/Best Book of a Musical) and a Drama Desk nomination (Best Musical Revue) for It Ain’t Nothin’ But The Blues, which ran at both Lincoln Center and Broadway’s Ambassador Theatre. Love, Janis, Myler’s musical biography of Janis Joplin, reached 700 performances at Eric Nederlander’s Village Theater, where he also staged Dream A Little Dream: The Mamas and the Papas Musical with Denny Dougherty. Lost Highway received its premiere at the Tony Award-winning Denver Center Theatre Company and then moved to the Mark Taper Forum, the Old Globe and the Ryman Auditorium in Nashville. Myler’s recent projects include Touch The Names: Letters To The Vietnam Veterans Memorial, John Fante’s 1933, the musical version of The Immigrant and the critically acclaimed Cuban-American play Union City, New Jersey, Where Are You?, starring Rosie Perez. His latest work (co-authored with Dan Wheetman) is Fire on the Mountain: The Music of the Coal Mines and he recently directed Betty Buckley in the new musical, Diner Stories at the Denver Center.

Mark Harelik moved to Los Angeles in 1987 where he co-wrote, with Randal Myler, Hank Williams: Lost Highway.  He has appeared in the films Election, Jurassic Park III and For Your Consideration.  Harelik also appeared in the Broadway musical The Light in the Piazza.  Harelik’s play, The Immigrant, also with Randal Myler, has been well received and adapted into a musical of the same name.

Damon Kiely is a professional director and writer, as well as a full time professor of directing and acting for DePaul’s Theatre School. He has directed for Next Theatre, TimeLine Theatre Company, A Red Orchid Theatre, American Blues Theater, Chicago Dramatists and Route 66. The House Theatre of Chicago and the Theatre School produced his world

premiere adaptation of Thieves Like Us. He served as the artistic director of American Theater Company (ATC) from 2002 to 2007. Directing credits at ATC include Oklahoma!(Nominated for six Jeff Awards including Best Musical and Best Direction of a Musical),The Dark at the Top of the Stairs, Orpheus Descending, A View from the Bridge, Strictly Dishonorable, and The Hairy Ape.  Prior to moving back to Chicago, Kiely produced, directed and taught in New York

Malcolm Ruhl’s credits include A Christmas Carol (Mr. Keys), Ain’t Misbehavin’ (musical director), Floyd and Clea Under the Western Sky (bass/accordion), all at the Goodman Theatre.  Ruhl has been music director for numerous productions including Hairspray, and Buddy: The Buddy Holly Story at Drury Lane Theatre; Eastland at Lookingglass Theatre; Hedwig and the Angry Inch and Oklahoma! (Jeff nomination) at ATC; Woody Guthrie’s American Song (Jeff award), Blues in the Night (Jeff nomination) and Smoke on the Mountain at Northlight Theatre; Pump Boys and Dinettes at the Apollo and Forum Theatres (Jeff nomination); Grease at Theatre at the Center; big, the Musical and Big River at Apple

Chicago stage veteran Matthew Brumlow, a Northwestern graduate, starred in the Milwaukee Repertory Theater’s production of Nobody Lonesome For Me in 2011 where his portrayal of Hank Williams was critically acclaimed.  He has twice been nominated for an Equity Jeff Award for his work as an actor in Chicago.

The multi-generational and interdisciplined artists have established the second-oldest professional Equity Ensemble theater in Chicago.  The 39-member Ensemble has nearly 500 combined years of collaboration on stage. As of 2014, they’ve individually received more than 131 Joseph Jefferson Awards and nominations that celebrate excellence in Chicago theater and over 20 Black Theatre Alliance Awards. The artists are honored with Pulitzer Prize nominations, Academy Awards, Golden Globe Awards, Emmy Awards and numerous other accolades.

Hank Williams: Lost Highway, by Randal Myler and Mark Harelik, directed by Damon Kiely, music director Malcolm Ruhl and starring Matthew Brumlow as “Hank Williams,” through Sunday, September 28, at the Greenhouse Theater Center’s Downstage Mainstage Theater, 2257 N. Lincoln Ave. Tickets are $29 Wednesdays – Fridays and $39 Saturdays and Sundays. The performance schedule is Wednesday – Saturday at 7:30 p.m. and Sunday at 2:30 p.m. with added Wednesdaymatinees September 10 and 17 at 2 p.m. Note: there is no Wednesday at 7:30 p.m. performance September 10 or 17.  Tickets are on now on sale at 773.404.7336 or  AmericanBluesTheater.com.