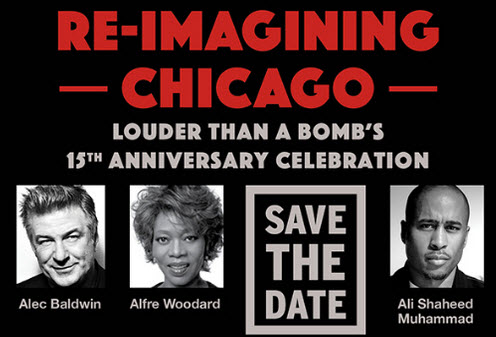 Young Chicago Authors (YCA), producers of the world’s largest youth poetry festival,Louder Than A Bomb (LTAB), will present a day-long series of special events to celebrate its 15thanniversary Sunday, March 1. Featuring co-hosts Alec Baldwin, Alfre Woodard and hip-hop composerAli Shaheed Muhammad (aka Ali from A Tribe Called Quest), the benefit starts with an intimate Sunday brunch at the Soho House, 125 N. Green St. from 11 a.m.-2 p.m. with a screening of segments of the Louder Than A Bomb documentary and live spoken word poetry performances in the 30-seat Soho House screening room. From 6-7 p.m., 40 guests will be welcomed by the co-hosts at an onstage, pre-show reception to celebrate YCA’s 15th anniversary at the Black Ensemble Theater, 4450 N. Clark. Directly following the reception, the day’s festivities will culminate with an evening performance, “Re-Imagining Chicago” at 7:30 p.m. emceed by Louder Than a Bomb’s co-founder Kevin Coval, featuring performances by current program participants and alumni, as well as participation from the co-hosts.

The 2015 Louder Than A Bomb festival encompasses more than 90 performances at 10 venues, featuring the talents of 1,200 students from over 120 schools, across 100 different Chicagoland zip codes. The festival attracts high school aged youth from a diverse cross-section of socioeconomic and cultural backgrounds that come together in celebration of the five-week poetry festival. For a complete schedule of events, visit:youngchicagoauthors.org/blog/ltab/ltab-events

“This is the fifteenth year of the Louder Than A Bomb: Chicago Youth Poetry Festival. In that time, LTAB has grown in Chicago into one of the largest youth cultural gatherings in the world,” says Poet, LTAB founder and YCA artistic director Kevin Coval. “Collectively, we are changing the culture of the community. If we change the culture, we change the politics and, ultimately, the policies. There is power here: a growing mass, an army, a counter-culture to norms that dehumanize people of color, the working class, and the critically underserved. The poets at LTAB in Chicago and the nationwide movement they represent are changing things for the better. Together we will make a more equitable country for all.”

“Alec, Alfre and Ali all have expressed their admiration and support for Louder Than A Bomb,” addedRebecca Hunter, Executive Director of Young Chicago Authors. “We are grateful to them for joining us here in Chicago as we mark this milestone in our development and embark upon a tremendous period of expansion, which will bring Louder Than A Bomb’s mission coast to coast.”

Sunday Brunch
11 a.m.-2 p.m., Soho House Chicago, 125 North Green St.
Guests will enjoy a late-morning brunch in Fulton Market at the Soho House’s private event space while being introduced to the work of Louder Than A Bomb in the Soho House’s intimate 30-seat screening room, co-hosted by Alec Baldwin, Ali Shaheed Muhammad and Alfre Woodard. A screening of segments of Jon Siskel and Greg Jacobs’ award-winning documentary, “Louder Than A Bomb,” and live spoken-word poetry performances will highlight brunch activities.

Tickets for this intimate brunch are $1,000; all brunch attendees receive a complimentary ticket to the 7:30 p.m. performance at the Black Ensemble Theater.

Tickets are $375; all reception attendees receive a complimentary ticket to the 7:30 p.m. performance at the Black Ensemble Theater.

About Louder Than A Bomb
Entering its 15th season, Louder Than A Bomb (LTAB) is the largest, youth poetry festival in the world. With 10 chapter sites around the country, Los Angeles is launching its festival in 2015 and New York City is scheduled for 2016. LTAB was founded in Chicago in 2001 and is hosted and produced by the non-profit organization Young Chicago Authors. Annually attracting 1000 participants from 120 schools across 100 different Chicagoland zip codes, LTAB offers high school in-class and afterschool teams focused on a Literary Arts curriculum as a team sporting event — with goals of growing reading and writing literacy combined with social and emotional development work that inspires young people, teachers and artists to invigorate educational spaces.

Running from February to March, the five-week Chicago Louder Than A Bomb festival attracts participants from diverse socioeconomic and cultural backgrounds. This year, more than 90 events will engage the festival participants in bouts, panel discussions, literary readings and multidisciplinary art battles. More than 10,000 audience members and participants attended
the festival programming across Chicago in 2014.