Actor MIKE IVESON Discusses What the Constitution Means to Me

Actor MIKE IVESON on the evolution of Heidi Schreck’s Tony Award nominated and Pulitzer Prize finalist play What the Constitution Means to Me now touring the country after a sold-out Broadway run. What the Constitution Means to Me will play Broadway In Chicago’s Broadway Playhouse at Water Tower Place (175 E. Chestnut) for a limited 6-week engagement March 4 through April 12, 2020. Visit BroadwayInChicago.com for tickets.

Mike Iveson (Performer) has appeared in dozens of productions in NYC and beyond. Public Theater: Gatz (with the award-winning Elevator Repair Service); the recent revival of David Hare’s Plenty; Measure for Measure; Arguendo. New York Theatre Workshop: as Ernest Hemingway’s alter ego Jake Barnes in The Select/The Sun Also Rises; The Sound and the Fury; Fondly, Collette Richland. Other recent theater: Everyone’s Fine with Virginia Woolf (ERS/Abrons); the Obie-winning A Beautiful Day…Great Lakes (New Georges); The World My Mama Raised (Clubbed Thumb); Crime or Emergency (PS 122); and How to Get into Buildings (New Georges). TV: “Orange Is the New Black.” 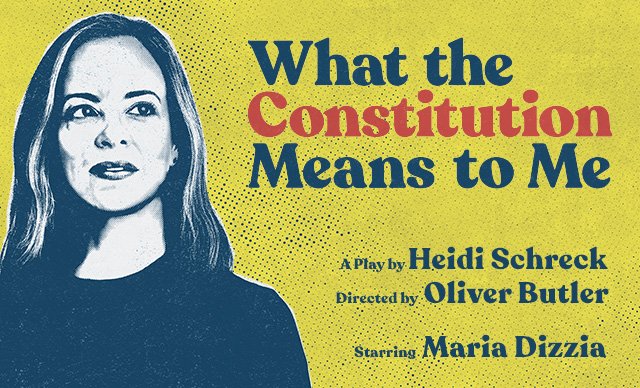 Playwright Heidi Schreck’s boundary-breaking play breathes new life into our Constitution and imagines how it will affect the next generation of Americans. Fifteen-year-old Heidi earned her college tuition by winning Constitutional debate competitions across the United States. In this hilarious, hopeful, and achingly human new play, she resurrects her teenage self in order to trace the profound relationship between four generations of women and the founding document that shaped their lives.

Schreck’s timely and galvanizing play, directed by Oliver Butler, became a sensation off-Broadway last fall before transferring to Broadway where it received two Tony Award® nominations among countless other accolades. See the play The New York Times hails as “not just the best play on Broadway, but also the most important.”

Initially announced for a 12-week engagement on Broadway, What the Constitution Means to Me was extended twice and fully recouped in its Broadway engagement, shattering box office records at the Helen Hayes Theater (240 W 44th Street, New York, NY), for a total run of 24 weeks. What the Constitution Means to Me officially opened March 31, 2019 after beginning preview performances March 14, and played its final Broadway performance on August 24, 2019.

What the Constitution Means to Me recently concluded a record-breaking limited engagement run at the Eisenhower Theater at the John F. Kennedy Center for the Performing Arts in Washington, D.C., where it played 15 performances immediately following the conclusion of the Broadway run, from September 11 through September 22, 2019.

What the Constitution Means to Me was commissioned by True Love Productions. This production originated as part of Summerworks 2017, produced by Clubbed Thumb in partnership with True Love Productions. The national tour of What the Constitution Means to Me is produced by Diana DiMenna, Aaron Glick, Matt Ross, and Level Forward & Eva Price.

Individual tickets for What The Constitution Means To Me  range in price from $30 – $85 with a select number of premium tickets available by calling the Broadway In Chicago Ticketline at (800) 775-2000 or by visiting BroadwayInChicago.com.  Tickets are available now for groups of 10 or more by calling Broadway In Chicago Group Sales at (312) 977-1710 or emailing GroupSales@BroadwayInChicago.com.

ABOUT BROADWAY IN CHICAGO
Broadway In Chicago was created in July 2000 and over the past 19 years has grown to be one of the largest commercial touring homes in the country.  A Nederlander Presentation, Broadway In Chicago lights up the Chicago Theater District entertaining more than 1.7 million people annually in five theatres. Broadway In Chicago presents a full range of entertainment, including musicals and plays, on the stages of five of the finest theatres in Chicago’s Loop including the Cadillac Palace Theatre, CIBC Theatre, James M. Nederlander Theatre, and just off the Magnificent Mile, the Broadway Playhouse at Water Tower Place and presenting Broadway shows at the Auditorium Theatre.  For more information, visit BroadwayInChicago.com.