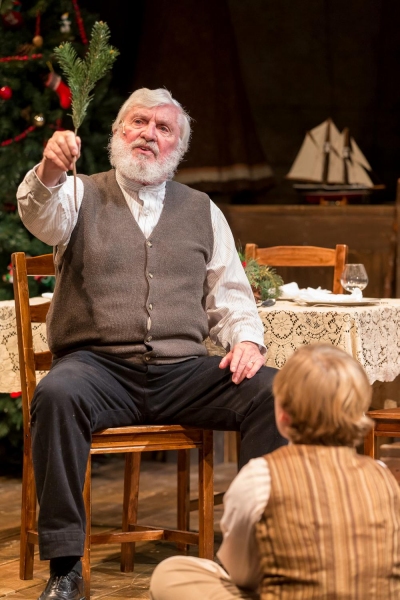 Called home on January 30, 2016, at the age of 77. He was loved and respected by the many lives he touched during his life’s journey. Born in the South Shore neighborhood, he was the eldest of five children. He is survived by his brothers Dan (Pam), Terry (Jerrie) and sisters Kathleen and Nancy Gilles (David). He found his beautiful Barbara (Lauterbach), the love of his life, early in life. He started a family and began his career as a 6th grade teacher at St. Dennis then moved on to St. Lawrence High School as a history teacher. After leaving teaching, he joined the Illinois Department of Corrections, later becoming executive assistant to a U.S. congressman. He then moved to the role of SR VP of Communications with LaSalle National Bank.
After retiring he and Barbara opened a sandwich shop on the south side of Chicago where everyone knew him as “Pops”. But his true love was acting. Well known in the Chicagoland theater community, his many accomplishments include founding of the Chicago Actors’ Repertory Theater Company, a federally funded training program for young actors, in the ’60’s. He won a Non-Equity Jeff Award for his role as Cardinal Law in Sin: A Cardinal Deposed and was nominated for a Jeff Award in his most beloved role as Gus, the feisty and lovable patriarch in The Christmas Schooner, a role he reprised for many years.
He enjoyed and was very committed to his church where he sang in the choir, served on the parish council, helped with charity events and donated his time to the food pantry. His greatest joy, however, was sharing in the lives of his cherished family.
He is survived by his loving wife of 56 years, Barbara; his children, Melissa Brown (Russ), Jacqueline, James Jr. (Cathleen), Christina Johanet (Bill), Matthew (Lyndie), David (Jennifer), Andrew (Nada). He is also survived by his 20 loving grandchildren and 16 great-grandchildren. Visitation will be held on Wednesday February 3, 2016 at the Congregation of St. Joseph Chapel, 1515 W. Ogden Ave in LaGrange Park, IL from 3pm. to 9pm. Phone (708)354-9200 for front desk, if necessary. A prayer service will take place at 7:30. In lieu of flowers, please send donations to St. James on Wabash, 2942 So. Wabash, Chicago, Illinois 60616.

Published in a Chicago Tribune Media Group Publication from Feb. 2 to Feb. 3, 2016