From the shows first number to the last scene you are in for a night full of laughter and outstanding performances. Under the impeccable direction of Scott Ellis (She Loves Me, Christmas Story Live, 30 Rock) the cast of Tootsie, based on the 1982 film, tells the story of an volatile actor who has become known to be too hard to work with finds himself out of work and unhirable. Desperate for work he will do anything for a job. Even, if it means assuming a new identity as a woman.

David Yazbek can add another wonderful score to his songbook. I absolutely loved the thematic attitude of the show. Through the themes Mr. Yazbek gave the characters another outlet for growth. There is never a wasted lyric or an unnecessary number. When you pair Yazbek’s score with Robert Horn’s (13: the musical) absolutely hilarious book you get a Broadway hit. Horn’s modernized take on the 1982 classic pays off big time. The story is extremely relevant today and is masterfully crafted. 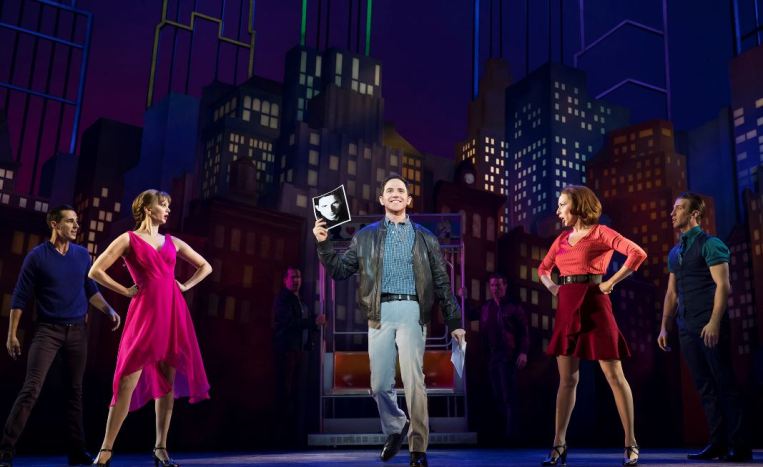 Santino Fontana (Cinderella, Crazy Ex-Girlfriend) is an absolute genius in the role of Michael Dorsey/Dorothy Michaels. Fontana’s Michael is self-absorbed and arrogant while his Dorothy is strong, caring, and inspiring. Fontana gets to show off his range through Yazbek’s score and he does so with prowess. One of the many standout points of Fontana’s performance is the way he truly becomes Dorothy, Dustin Hoffman would be proud.

Sarah Stiles (25th Annual…Spelling Bee, I’m Dying Up Here) plays Michael’s ex-girlfriend and friend Sandy. Stiles creates one of the funniest characters to the stage. From the get go she has you laughing and it doesn’t stop.  Andy Groteluschen (Cyrano de Bergerac, Into the Woods) plays Michael’s roommate, boss, and best friend Jeff. Groteluschen is a scene stealer. His delivery and comedic execution is spot on.Groteluschen gets the honor of delivering one of the funniest Act 2 opening numbers I have heard. The chemistry between Stiles and Groteluschen is absolutely hysterical. These two are responsible for one of the hardest laughs of the night.

Lilli Cooper (SpongeBob, Spring Awakening) plays the unsuspecting costar of Dorothy Michaels, Julie. Cooper allows herself to be vulnerable in her scenes with Fontana. Cooper has an incredible instrument that allows her to also handle Yazbek’s score with expertise.

Reg Rogers (The Iceman Cometh, Present Laughter) gives an appropriately smarmy and delightfully funny performance as the egocentric director Ron Carlisle. Michael McGrath (Spamalot) plays the fed up agent of Michael Dorsey.McGrath shows exactly why some of the smallest parts are the most fun to play.

The scenic design by David Rockwell (Pretty Woman, She Loves Me) is a visual delight. Filled with ever moving parts you are seamlessly transported to every location swiftly and effectively. There is never a moment where I am unsure of where I am or a feeling of wanting more. Donald Holder’s lighting design aids Rockwell’s scenic design by not getting crazy with specials and using the lights to enhance the work already being done by the actors. William Ivey Long’s (The Producers, Grey Gardens) costume design also doesn’t go too complex which allows for their beauty to be shown, as well as, the success of all the quick changes.

TOOTSIE will play a pre-Broadway engagement at the Cadillac Palace Theatre from September 11- October 14. TOOTSIE will go to Broadway in Spring 2019. Tickets are available at broadwayinchicago.com.