In 1962, fifty-seven years ago, the magnificent TONY BENNETT recorded “I Left My Heart in San Francisco.” The song was honored with two Grammy Awards, including “Record of the Year” and gave Tony a signature tune that, as he delights in saying, has made him “A Citizen of the World.” Last March, the classic was entered into the National Recording Registry of the Library of Congress as “an aural treasure worthy of preservation.” Now in 2019, and about to turn an ageless 93, the legendary performer – himself a world treasure – continues to leave his heart in each song that he sings and in every aspect of his life.

On FRIDAY Evening, JUNE 21st (The first day of Summer!) at 8:30 pm, The Master Interpreter of American Popular Song headlines under the stars at one of his favorite venues, the RAVINIA FESTIVAL. This will mark Tony Bennett’s 40th PERFORMANCE since first appearing at the world’s oldest (115 years!) outdoor music festival in North America in the summer of 1984. He is Ravinia’s most beloved and eagerly anticipated returning artist, and his SOLD-OUT concerts are always a highlight of its star-studded season. Tony’s millions of admirers span the generations and Festival audiences are no exception! The standing ovations begin the moment this beloved music icon walks onstage and before he sings a single note! The 19-time Grammy Award-winning legend is keeper of the flame of The Great American Songbook and the pre-eminent singer of our time.

TICKETS ARE CURRENTLY ON SALE TO RAVINIA SUBSCRIBERS; AND TO THE PUBLIC BEGINNING TUESDAY, MAY 7.

Tony Bennett’s Very Special Guest, ANTONIA BENNETT, like her father, also embraces The Great American Songbook. In addition to her many solo engagements and recordings, she often tours with her father. Sharing the stage with him is ”A distinct privilege. I am constantly learning from him. He never compromises on quality and has set the bar very high.” There is a mutual love and pride between the two performers, and Antonia reflects Tony’s genuine warmth and delight in singing for Ravinia audiences.

Tony Bennett (whose given name Benedetto means “blessed one” in Italian) has often said, “I have what I call a blessed life. I’m doing what I love and I’ll never retire! I just want to sing and paint and keep getting better and better.” Splendid news to his millions of admirers all over the world and to the critics who have continued to applaud the legendary singer down through the seasons. This ageless and timeless jazz master and Renaissance man still sings and swings to perfection and continues to cut a handsome and dashing figure onstage. Frank Sinatra called Tony “The Best Singer In The Business!” It is “Ol Blue Eyes” voice you hear introducing his dear friend and favorite singer before each performance.

From the Chicago Tribune’s jazz critic Howard Reich after Tony’s 2018 Ravinia concert: “What we heard and saw Saturday night at the Ravinia Festival wasn’t merely historic … But it was the depth of Bennett’s insights, the breadth of his expressive range and the delicious idiosyncrasies of his interpretations – with its abundant alternative notes and operatic flourishes – that rendered this performance a tour de force.”

After his duet partner and dear friend Lady Gaga received her Oscar a few weeks ago, Tony congratulated her with these words, “Brilliant! Triumphant! You can do anything at the highest level of artistry!” The very same can be said of Tony Bennett!!

Thirty-three years ago, Tony released an album called “The Art of Excellence!” Those words also describe the legendary singer’s illustrious music career that now spans 70 extraordinary and unprecedented years. No one in the history of American popular song has recorded for so long and at such a high level of excellence and insistence on quality. The 19-time Grammy Award-winning artist has acknowledged his unparalleled success as a recording artist and entertainer to always staying with the best music. He credits his beloved mother, Anna Suraci Benedetto, with instilling in her son the importance of “quality.” His best friend Frank Sinatra further encouraged Tony to “Always stay with good music!” Count Basie, another close friend, shared this bit of wisdom, “Why change an apple!”

Staying with the best songs and being true to himself has made it possible for Tony Bennett to span the generations with music that is timeless. He introduced a multitude of chart-topping hits into The Great American Songbook beginning in the 1950’s with “Because Of You” and “Rags To Riches.” During the last decade alone, Tony has sold over ten million albums world-wide. He is the recipient of countless Platinum and Gold albums, 19 Grammy Awards, including the Grammy Lifetime Achievement Award, and a Grammy for “Record of the Year” honoring MTV Unplugged (conceived by Tony’s son and manager Danny Bennett). The New York Times reported at the time, “Tony Bennett didn’t just bridge the generation gap, he demolished it!”

The revered performer’s extraordinary accomplishments upon entering his 90th decade have been remarkable and inspiring. Tony Bennett’s internationally acclaimed Sold-Out “CHEEK to CHEEK” Tour with Lady Gaga earned raves and headlines all over the world – becoming the fastest sell-out in Ravinia history! The album opened to raves at #1 on The Billboard Top 200 Album Charts, was named the Magazine’s #1 Jazz Album of the Year (at a youthful 88 – the oldest artist to have a #1 jazz album) and honored with “A Best Traditional Pop Vocal Album” Grammy Award. 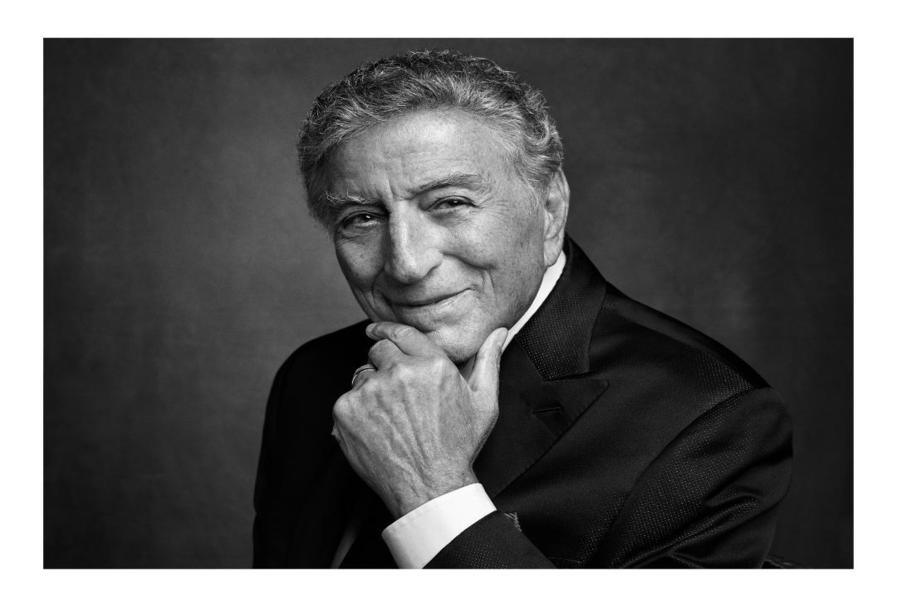 Tony Bennett’s accolades are many and given with genuine love and admiration. In November 2017, Tony was honored by the Library of Congress (our Nation’s oldest federal cultural institution) with the Gershwin Prize for Popular Song at a star-studded tribute in Washington, DC. Tony’s good friend, the renowned jazz musician Wynton Marsalis, delivered a moving tribute: “This man is not only a great artist, but also a great citizen. For decades Tony has been a mentor to generations of artists, a proponent of the arts and the importance of music education. But underneath it all and central to who he is and why he still resonates so strongly, is that deep down in his soul Tony Bennett believes in the very best of our country, the United States of America.”

A 2005 Kennedy Center Honoree is just one of many honors bestowed upon this national treasure. In 2006, he was named an NEA jazz master, received the UN’s “Citizen of the World” Award, and honored with Billboard’s “Century Award” in recognition of his outstanding contributions to American music. In 2015, Downbeat inducted Tony into the Magazine’s esteemed “Downbeat Hall of Fame.” He is also a recipient of the Variety Club’s highest honor, their “Entertainment Icon” Award. Tony is only the sixth person to be so honored (including his friends Frank Sinatra and Cary Grant) in the Club’s 114-year history.

Tony’s other great passion is his art. Anthony Benedetto has been painting since he was seven years old making chalk drawings in front of his childhood home in Astoria, Queens. A dedicated artist, he paints or sketches every day whether at home in NYC or on tour. His original paintings of dear friends Duke Ellington and Ella Fitzgerald are on display in the permanent collection of The Smithsonian’s National Portrait Gallery. The United Nations commissioned Tony’s artwork on two occasions, including one celebrating their 50th anniversary. The Butler Institute of American Art permanently displays Tony’s original painting “Homage to Hockney,” honoring his good friend David Hockney. The prestigious Landmark National Arts Club of NYC is home to his painting, “Boy on Sailboat, Sydney Bay.” 2018 marked the 25th year that a Benedetto painting has graced the cover of the American Cancer Society’s annual Holiday greeting card and all proceeds are earmarked for cancer research.

In 1988, Tony gifted Ravinia with an oil on canvas, “Ravinia: Music Under the Stars.” It is proudly displayed on the Festival grounds along with commemorative posters in the Ravinia gift shop.

Throughout his life Tony Bennett has been a dedicated humanitarian making a difference in the lives of millions. He is a WWII veteran who fought in the Battle of the Bulge and participated in the liberation of a concentration camp. Tony marched with his good friend Harry Belafonte alongside Dr. Martin Luther King, Jr. from Selma To Montgomery in Support of Civil Rights. Coretta Scott King honored Tony Bennett with the Martin Luther King Center’s “Salute to Greatness” Award for his ongoing efforts in fighting racial discrimination.

When young people ask Tony how to get started as a performer, his answer is “Get a good education first!” Twenty years ago, Tony and his wife SUSAN BENEDETTO founded FRANK SINATRA SCHOOL OF THE ARTS in honor of his dear friend. In 2009, a state- of-the-art permanent facility was constructed in Bennett’s hometown of Astoria, Queens. Tony and Susan established EXPLORING THE ARTS (ETA), a non-profit organization to transform the lives of young people through arts education. At the heart of ETA’s work is a

Tony’s dear friend Judy Garland got it right when she said, “Tony Bennett is the epitome of what entertainers were put on this earth for…to take our troubles away!” The singer himself has often remarked, “I just want to make people happy!”

When Tony Bennett sings about love it comes straight from his heart, and the intimacy the beloved singer evokes is unparalleled. In a 2001 Vanity Fair interview, Bennett was asked, “How do you sing!” He replied, “I go along in the song, paying attention to the nuances of each line, and the breathing, and the spirit. Until I come to the word ‘LOVE!’ then I give that word my attention. The word ‘LOVE.’ Get it!!”

In a sea of change, this brilliant artist has remained true to himself and to his music. Tony Bennett is, without question, the foremost interpreter of American popular song. He has not wavered in his integrity, humanity, and dedication to his art, his country, and to his millions of admirers throughout the world.

TONY BENNETT Onstage And In The Studio (Nov. 2018), the stunning 188-page coffee table book by Tony Bennett with Sirius XM radio host and jazz expert, Dick Golden, is filled with lavish illustrations, priceless photographs and memorabilia going back to those earliest years. It is a fascinating and inspiring treasure of personal reflections from Tony and those who have played such a significant role in his life.

4/19/77 “Dear Tony, What a joy you are to sing with me and just plain old fun to be with. I’m thrilled about our show. You are marvelous in it, and just being out there with you gave me a pick up that’ll carry me over for a lot of years. I love you for showing up. I love you for singing your little heart out. And, one other thing. I love you. Francis Albert”

“My respect for his artistry would lead the way. His insistence, to this day, on taking musical chances onstage (something he calls ‘moving the furniture around’) keeps his performance relevant and engaging to his audience night after night.” – Danny Bennett

“Tony, I love you. You really are beyond special. Thank you for believing in me. – Love, Lady Gaga”

“I love entertaining people. I strive to make them feel good and they make me feel wonderful. To explain it simply, I like what I do, and my ambition is to get better as I get older. That’s really what I’m all about.” – Tony Bennett