Suzanne Petri’s “Torch, Sass & Swing” Is A Rush Of Magic

Chicago’s Rush Street has always had a reputation of being the entertainment street of Chicago. Venues which include Mr. Kelly’s, Punchinello’s, The Chez Paree, The Happy Medium, Yvette’s, Sages and many more clubs. Music and entertainment followers would always go to Rush Street to get their fix. Over the years you would hear Sophie Tucker, Dinah Washington, Billie Holiday, Julie Wilson, Julie London, and Sarah Vaughn the early days of Bette Midler, Barbra Streisand, and the comedy of Lenny Bruce, Jackie Vernon, Mort Saul, and David Steinberg. During the 70’s and 80’s you would hear local performers Nan Mason, Bob Moreen, and Denise Tomasello to name a few. Rush Street later became known as the “Viagra Triangle”, and now the Millennials are making it their own with popular restaurants and dance clubs. Unfortunately, the early days of all of the fabulous clubs and cabaret venues are long gone. There are very few live entertainment venues left. None of which have the charm of Rush Street in those days. 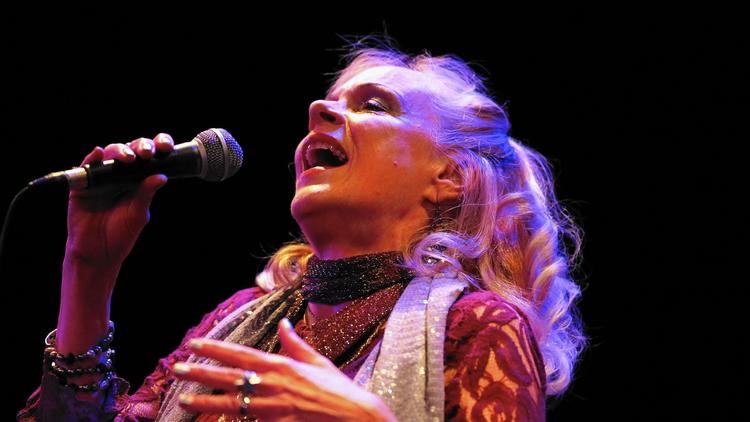 Bringing all of the memories and music back is Suzanne Petri with her tribute to Rush Street with “Torch, Sass & Swing”. Suzanne who is joined on stage with Musical Director; Bobby Schiff, and Bass Player; Jim Cox, recreated the magic of those days gone by. In addition to the musical collaboration, Suzanne was joined on stage with her husband, Actor, Writer; Robert Breuler who narrated and joined the group with telling the story. Guest performer, singer Greta Pope added to the evening of fine music. To top off the evening this show was presented at the new 1700 Theatre in the Steppenwolf Theatre complex that recreated the intimate atmosphere that so many of the Rush Street clubs had. Aside from the wonderful music and the performers, one of the main elements for the success of those early clubs was the intimacy, where the singers can physically connect with the audience. Suzanne definitely connected during her show, which is one of her best.

Suzanne revisited some of those early venues during her show and remembered some of the entertainers who were known for their appearances at some of those famed clubs. The show began with Robert Breuler telling the story about the beginning of the Rush Street era, describing some of the clubs such as The Happy Medium, Mr. Kelly’s and the Chez Paree. Bob and Suzanne then continued with a spirited discussion about those days. Suzanne began with a Cole Porter medley including “Anything Goes, Just One of Those Things and From this Moment On”, really a wonderful beginning. Suzanne then paid tribute to Ella Fitzgerald, Frank Sinatra, Sarah Vaughn, and Sophie Tucker, singing “Lady Is a Tramp” which Suzanne told the audience is her theme song. All of these named performers performed at Mr. Kelly’s during its heyday. Bob continued to tell the story and Suzanne continued to sing the song that Frank Sinatra thought is the best song heard in any language; Rogers and Hart’s “Bewitched Bothered and Bewildered. Joining Suzanne on stage for the song was Chicago Cabaret singer, Greta Pope who sang a few verses of the song and blended well with Suzanne for a perfect ending. Another Rogers and Hart song that Suzanne sang was “I’ll Tell the Man in the Street”, which was sung by Barbra Streisand when she opened for Mort Saul at Mr. Kelly’s back in the 1960’s. Bette Midler also performed at Mr. Kelly’s during the 1970’s beginning her career, opening for Jackie Vernon.

Suzanne continued the show by celebrating the renowned Julie Wilson who became friends with Suzanne. Their friendship continued for many years. Suzanne honored Julie Wilson by singing “Cry Me A River”. Also honored was Sophie Tucker, who sang at Mr. Kelly’s into the wee hours after her theatre performances. Suzanne proceeded with a spirited Sophie Tucker medley which included, “I Know my Baby’s Cheatin on Me, There’ll Be Some Changes Made, and of course, Sophie’s signature song, Some of These Days”.

Suzanne spoke of her personal connection with Julie Wilson speaking of her incredible phrasing of the songs she sang. Their conversations must have included ballads, because Suzanne’s ballads are moving and meaningful. Even though, Suzanne’s up-tempo songs are entertaining, I actually prefer to hear the rich sounds of Suzanne singing a ballad as she did with her Torch Song Medley providing a fitting tribute to Julie Wilson. The medley included, “Why Can’t I, He Was Too Good to Me, and Am I Blue”. All of which have been sung by Julie Wilson. Suzanne gave a rich, wonderful interpretation of each song. I know she followed Julie’s style, and her acting experience added to the meaning of the songs.

Even though, I saw Torch, Sass and Swing some months back at Davenports, I could see that the show has been revised, and it worked. It worked specifically with the newer intimate setting of the fabulous 1700 Theatre in The Steppenwolf complex. It was a great addition to have Suzanne’s husband Bob Breuler as M.C. However, I believe it would have been a little more effective, to have Bob on stage at the beginning and the end of the show, with Bob telling the main story off stage. I found Bob’s entrances on and off stage a little distracting, breaking Suzanne’s spell that she had over the audience. Not to disregard Bob’s amazing talent, because he was a great addition to this show. I believe that Suzanne would have created a stronger connection with the audience with this small change. None the less, I found the concept to be a great addition to the show.

Above all, I found Torch, Sass and Swing to be an enjoyable experience. The musical direction by Bobby Schiff along with the Bass stylings of Jim Cox, with guest performer Greta Pope, all added to the wonderful evening of reminiscing about the early days of Rush Street. The evening ended with an encore of “In the Wee Small Hours of the Morning. This song is a popular ending for most singers at clubs, and it was an appropriate ending for Torch, Sass and Swing.