Broadway and TV star MANDY GONZALEZ – currently starring in Hamilton– will follow up Fearless, her debut recording from earlier this season, with Fearless: B-Sides, available today, Friday, May 18. Following the success of the original album, these five additional digital-only tracks from the original sessions include creative new interpretations of standards (“I Only Have Eyes for You”) and classics (“Bein’ Green”), in addition to her first-ever Spanish-language recording (“Vivir Mi Vida”). Fearless: B-Sides is being released on the heels of her successful national concert tour, which included a performance with the student activists from Marjory Stoneman Douglas High School. Please order Fearless and Fearless: B-Sides, both produced by Bill Sherman, at Fearless.us.

Fearless, her remarkable solo debut bridging pop and R&B, iscurrently available from East West Records. Called “a knockout anthem” by New York Magazine/Vulture, “powerful” by Rolling Stoneand “moving” by Broadway.com, the personal and compelling title song, written by Lin-Manuel Miranda, utilizes Mandy’s own story to explore issues of both politics and family. This album – hailed as “a genre-defying, highly-personal, daring, and brilliant debut” from Pop Bytes – delivers songs from some of the most accomplished writers in the music industry, including Lin-Manuel Miranda, Jennifer Nettles, Bill Sherman, and Tom Kitt. 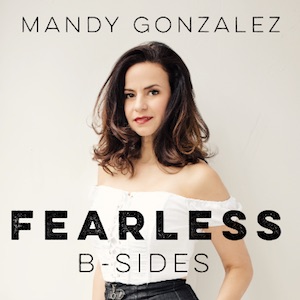 Fearless also features a powerful duet with Mandy and Christopher Jackson, the Hamilton star who was featured opposite Gonzalez on Broadway for In the Heights. Mandy adds an intimate new version of her signature song, “Breathe,” and a total remake of the classic “Que Será, Será.” A music video for the title track – directed by Paul Bozymowski and produced by RadicalMedia – can be seen at Fearless.us.

Malala — the Nobel Prize laureate and Pakistani activist — recently chose the album’s title track to be part of her Spotify playlist for International Women’s Day, which was heard across 10,000 Starbucks stores.

MANDY GONZALEZ is currently starring in the Broadway musical sensation Hamilton as Angelica Schuyler. She is also known for originating the role of Nina Rosario, in her brilliant performance in the Tony Award winning, Lin-Manuel Miranda Broadway musical In the Heights, a role she originally created Off-Broadway at 37 Arts and which received a Drama Desk Award. She starred as Elphaba in the Broadway production of Wicked, blowing the roof off of New York’s Gershwin Theatre each night as she belted out signature song “Defying Gravity” and for which she was rewarded with a Broadway.com Award for “Best Replacement.” Other Broadway roles include Princess Amneris in the Elton John and Tim Rice musical Aida and the Broadway show Lennon where she portrayed multiple roles including that of Beatles’ icon John Lennon. Mandy made her Broadway debut in Jim Steinman’s Dance of the Vampires starring opposite Michael Crawford. Mandy received an OBIE Award and overwhelming critical praise for her performance in the Off-Broadway production of Eli’s Comin’, directed by Diane Paulus and based on the music and lyrics of renowned singer-songwriter Laura Nyro. Equally at home on the big and small screen, she has appeared in Across the Universe, directed by Julie Taymor; After, starring opposite Pablo Schreiber and Man on a Ledge, with Sam Worthington. Most recently, Mandy had a recurring role on the ABC drama thriller “Quantico.” On Sunday evenings, television viewers can find her working at The White House on the CBS breakout hit “Madam Secretary.” Mandy can be heard as the voice of Mei in Disney’s Mulan 2. She performs concerts in prestigious venues across the U.S. and around the world.