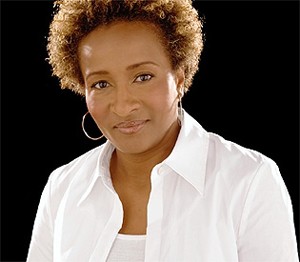 Wanda Sykes wants you to know that she still has a mind and a mouth. And she’s not afraid to use either.

The Emmy Award-winning comedienne known for her work on “The Wanda Sykes Show”, “The New Adventures of Old Christine”, and “Curb Your Enthusiasm” as well as several HBO specials is back on the road after a year that has seen much in the way of the funny lady’s personal and professional advances. After coming out publicly following an anti-Proposition 8 rally in California, Sykes has unleashed an even greater acidity to her already irreverent tongue. The comic recently caught up with ShowBiz Chicago to discuss the accomplishment in producing one’s own talk show, her experience as one of television’s foremost female writers, and why comedy just may be paving the path for equality.

MJR: After a year of new shows, old shows, and films, you’re hitting the road for a brief while. What keeps you anchored in the stand-up form?

WS: (Wanda Sykes) That’s where I started. It all begins with stand-up for me. I still enjoy it. If I go through a phase without it for a while, focusing on just film or television, I start to feel funny. It’s what I know, it’s my confirmation [laughs].

MJR: You’ve spoken before about the importance of a comedian finding her own voice, versus falling into the impersonation trap that often afflicts early performers. How do you feel your comedy voice has evolved?

WS: It’s more genuine, and sometimes more offensive because of it. It’s more out there. Coming out was the last, well I don’t want to say the absolute last, but one of the last hurdles for me being onstage and being totally open. It has been just liberating and has given me total freedom onstage in that sense. I mean, even when you do stand-up you aren’t truly who you are, because you’re still on that stage, you know? But I do feel as though I am more myself now than ever before.

MJR: Let’s talk about your talk show. A few years ago you commented on your disappointment with the networks’ willingness to shift time slots and withdraw support. What made you want to come back into television by yourself, specifically in the talk show format?

WS: Fox came to me with the idea for a talk show. There was so much out there going on at the time, you know we had Obama in the White House and other things happening politically and socially. I thought it would be a good way for me to touch on those issues, but also to be able to do stand-up but without the travel [laughs]. You know, stay at home with my family. There were a lot of things that really appealed to me. Also, you know, I’m a whole lot of things. I’m African-American, a lesbian, and I thought “Wanda, come on now”- it would be a great platform for me to be out there.

MJR: Late night comedy shows have been a big part of the news this past year, with the network battle involving Conan O’Brien and Jay Leno. You once commented on a similar struggle with “Wanda At Large”. Have your perceptions of the nature of the business changed with your current show?

WS: I don’t think anything has changed with the networks, to be honest. The way they see it, you either get the ratings or you don’t, you do things the way they want you to or you don’t. That’s the nature of the business. I pretty much did the my show the way I wanted to with what I had, with the budget and all of those other issues. There are things though that they just won’t let you touch upon or talk about on network TV. But even with those constraints I do feel as though I did the show I wanted to do.

MJR: Writers are frequently tossed to the back burner on television. How have your early experiences as a writer assisted in how you run things as both a performer and producer?

WS: Writers are absolutely key. Everything is writer-driven. I wanted it that way on my show. I would come up with the pieces and work with them on editing and eventually see it through to production. It was a collaborative effort and it has to be a collaborative effort, but people forget that sometimes. You have to show the respect.

MJR: You were the only female writer on “The Chris Rock Show” and now your show has a record four women writers. How do you view this kind of inequity in casting and hiring that often persists today?

WS: People just don’t listen to them sometimes. I don’t think it’s that women aren’t allowed to be funny. I think that more people need to listen, and then they’ll get it. I’m always surprised by the women I have on my show, who are incredibly funny, that they are even available. When I was going through submissions I didn’t say “I want to have a bunch of women on my staff,” I mean gender didn’t come into play. It has to be about talent. But you’re right, I don’t get it. I don’t know if when people see female names on an application or audition they don’t bother or read it with a different perception. I just don’t get it.

MJR:  Your charity work tends to be second nature to you. You sit on the board of Equality California and you even asked Constance McMillan to present you with your GLAAD award, without asking to be the “celebrity face” of the cause like other performers. Why is this kind of self-effacing approach important to you?

WS: Equality California is so important to me because it is personal. It is affecting my family. The right to marriage affects my family all the time. So it wasn’t something where I could just stand by and let other people do what they were doing. So I just got motivated on that personal level, not as a performer but as a person, and said look, I got to fight for myself. I can lend my voice and my name, that was one way to help out. But lend that voice so that the cause can actually move forward, that is what it’s about.

MJR:  Since you have taken a more sociopolitical platform in the past few years, how do you feel your audiences as a performer have evolved with you?

WS: I have been really lucky in that way, because I’ve had plenty of people follow me for quite a while now. They followed me in the clubs, doing stand-up, then onto bigger projects. I have a base from “The Chris Rock Show”, another from “Curb Your Enthusiasm” and just different projects like that. They’ve stayed with me, which has been great. I’ve always had an LGBT following and now I think it’s more about ownership by that community which is cool, because I am a part of that community. I want folks to feel that way, to feel that connection to me. The audience has always been diverse but now I feel like I can identify where I picked them up from.

MJR: When you did “The Advocate” interview, a spokesperson from Equality Florida commented on your use of comedy as a tool for change. What do you feel about comedy’s relationship to the move toward equality?

WS: With comedy, you know, you’re laughing at yourself or at someone else. It doesn’t come across as preachy. I think comedy is a way to get people to think. You’re not telling them what to do or think exactly. I mean you are in a sense, but it’s in a way where they can laugh about it. It’s not the schoolmarm punishing you or telling you to do this or that. It makes issues way more accessible for people, and that’s how we can inform people and hopefully change things.

Wanda Sykes plays The Venue at the Horseshoe Casino on June 12, 2010. To purchase tickets or for more information, please visit www.TheVenue-Chicago.com. – See more at: http://la.gopride.com/news/interview.cfm/articleid/171225#sthash.w5YEdK84.dpuf