Pride Films and Plays is excited to start its fall season with the world premiere of Resolution, opening October 24 at Rivendell Theater, 5779 N. Ridge Ave., Chicago. Executive Director David Zak and Artistic Director Nelson Rodriguez announced the full cast today. This will be the last PFP production before it opens the Pride Arts Center, 4739 N. Broadway in January.New Years’ Eve, New York City, 1892. High-society husband and wife Jack and Hannah make their resolutions for the coming year — but when their maid discovers the happy couple’s long-held secret, their lives may never be the same. Resolution is a vintage queer thriller for the modern era. 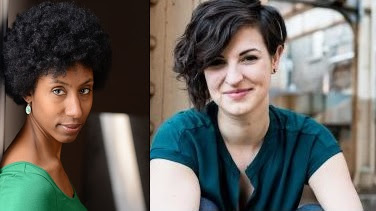 PFP Artistic Director Nelson Rodriguez says, “I’m thrilled for Resolution to be receiving its world premiere at Pride Films and Plays after winning our LezPlay competition last year. The play might be set at the turn of the last century, but its circumstances are very in tune with our current political and social climate. The play asks, ‘Can two groups of people with opposing moral viewpoints find common ground and respect each other enough to work together for a better future?’ Sounds familiar doesn’t it?”

Based in Los Angeles, Nancy Nyman and Heather McNama create, communicate, and collaborate. Two kick-ass chicks with somethin’ to say, they have written The F Word (TV), Social Work (TV), Family Storey (Disney Channel), Jesus Christ SuperStore (feature film), and The Untitled Meryl Streep Project (feature film). They are foster parents who are frequently tapped to speak about their experiences and the couple was recently featured in The Huffington Post. Visit them at twogirlsunleashed.com.

Aneisa Hicks is really excited to be a part of this show. Chicago credits include: The House That Will Not Stand, Girls In Cars Underwater (Victory Gardens Theatre), The Old Friends (Raven Theatre) Florissant and Canfield (Goodman Theatre reading series). She wants to thank PFP for allowing her to tell this story.

Tiffany Mitchenor is excited to be making her Chicago theater debut with PFP. Her most recent regional credits include The Decade Dance (Williamston Theatre); Wit (Aurora Theatre); Marcus or the Secret of Sweet and Les Liaisons Dangereuses (Actors Express Theatre). Tiffany received her MFA from UCLA.

The mission of Pride Films and Plays is to change lives through the generation of diverse new work (or work that is new to Chicago) with LGBTQ+ characters or themes that is essential viewing for all audiences. We accomplish this mission through fully-staged productions, writing contests and staged readings, film screenings, and special events. We foster long term relationships with artists to create programming that is as diverse, unique, and complex as the community we represent. In 2015, Huffington Post called PFP “A powerful and empowering entity.”

Pride Films and Plays is supported by The MacArthur Fund for Arts & Culture at The Richard Driehaus Foundation, The Illinois Arts Council, City of Chicago’s City Arts Fund, the Elliott Fredland Charitable Trust, Proud to Run, and the AmazonSmile Foundation. PFP is a member of the Smart Growth Program of the Chicago Community Trust. Pride Films and Plays is a member of the LGBT Chamber of Commerce of Illinois and The League of Chicago Theatres.