A bifurcated family dealing with mental illness and addiction becomes an actors’ tour-de –force in Redtwist Theatre’s world premiere of Erik Gernand’s The Beautiful Dark which explores how familial relationships can strengthen and collapse under the pressure of protecting the one from the many.

A true ensemble piece, Mr. Gernand’s timely play is a psychologically manipulative piece of storytelling.   As the play opens we find that Jacob (Aaron Kirby) has been kicked out of college on the pretense of having bad grades.  However, from the moment we meet him, it is clear that there is a very dark nature at work inside his mind.   His mother, Nancy (Jacqueline Grandt), a recovering alcoholic, is trying to keep together what is left of her family after divorcing her police officer hubby, Tom (Tommy Lee Johnston) and raising her youngest boy, Charlie (Jacob Bond), who has always looked up to his older brother.

As the play unfurls, each of the characters become not who they seem, or maybe who we want them to be.  Each, at some point, exists to manipulate the surroundings of the other with the result being a riveting exploration of what the families who bore mass murders had to be cope with. 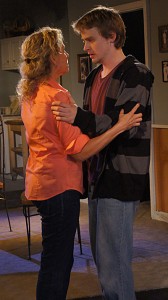 Superbly directed by Josh Altman, The Beautiful Dark wastes no time bringing the audience into the disturbing world of this family whom are all clearly on the brink.  Each one of the actors is perfectly cast and relate to each other in a very organic and real way, that at no time do you ever question the authenticity of their performances.

Aaron Kirby, who won a Jeff award for an equally disturbed character in dark play or stories for boys, is brilliant as Jacob.  Mr. Kirby gives a raw and gritty performance that gives this play its breath.  So to does Jacqueline Grandt who plays the effected mother in a poignant yet venerable manner.   Ms. Grandt’s scenes with Mr. Kirby are quite exceptional to watch.   As younger brother Charlie, Jacob Bond delivers a performance that actors twice his age could not accomplish.  Mr. Bond is at all times connected with this fellow actors and could very easily win a Jeff for his role here.   Tommy Lee Johnston has some nice moments as the tormented patriarch who sees, through his own anger, what his son may be capable of doing.  Scott Olson’s Mr. Marsh, though at first glance superfluous to the story, ends up giving Nancy a multi-dimensional layer that is needed to better explain her actions and  Tiffany Williams brings her best as Sydney, Jacob’s ex-girlfriend, who reveals the truth behind Jacob’s college play.

With all the shootings that have plagued our country in recent memory, it is necessary to explore the subject matter that The Beautiful Dark puts before us.  They are ethical and moral questions that we as a society must debate. Mr. Gernand’s play is just the right vehicle to open up that discussion.  It is an important work that is enhanced by the fantastic actors who inhabit these roles for a brief but life changing hour and a half.