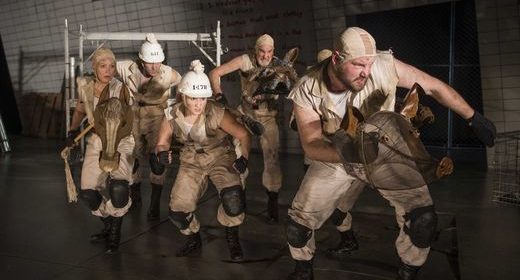 On a snowy Sunday night, as I was leaving the Milwaukee Repertory Theater’s quaint Quadracci Powerhouse nestled in downtown Milwaukee after having seen a production of George Orwell’s political novel Animal Farm, I overheard a woman tell her companion that what she just saw on stage made her sick.  My sentiments exactly.

Had the impressive creative powers behind this shocking adaptation by Ian Wooldridge heard that remark they would’ve been pleased to know that their objective was realized.

Here goes a refresher course of Orwell’s 1945 novel: Animals living on Manor Farm are exposed to harsh labor practices by their abusive farmer.  So, they band together to run him off the farm, and take over the running of it themselves.  All goes well until the pigs become so hungry for power they end up destroying the very freedom and equality they all worked so hard to get.

At the outset of their newfound freedom, the animals draw up a series of commandments – placed on a parchment on stage and written out in red paint to symbolize blood – that they are expected to adhere to: No animal should kill another animal. All animals are equal.  But through a thirst for power, manipulation and lack of education, these commandments are shattered: Animals do end up killing other animals. All animals are equal, but some animals are more equal than others.

It is here we begin to see, sadly, the parallels between Orwell’s tale, penned in 1945, and our present world.  This tale is still very relevant today.

Animal Farm, under the innovative direction of May Adrales, entertains only with its imaginative use of motion and music.  The underlying message is supposed to make us mad.  And it does.  In her note in the Animal Farm playbill, Adrales says her work as a director “stems from a desire to push the world in a certain direction, to alter other people’s ideas of the kind of society that they should strive after.”  Adrales further explains she and her crew looked at many major upheavals in history ­­– past and present – and worked the images into the movements we see on stage.  And it shows.

Adrales and her crew devised a series of clever puppets and masks so that we see both man and beast at the same time. Izumi Inaba’s costumes and Andrew Boyce’s scenic design, which shifts the action from Orwell’s barnyard to some dark, modern place, play crucial roles in this version of Animal Farm.

The cast is made up of six actors, most of whom tackle dual roles, and most as animals.  My personal favorites were Tiffany Rachelle Stewart, who plays Mollie the spoiled mare and is brilliant as Squealer the bully pig; Stephanie Weeks, who held the audience in the palm of her hand with a sensational singing voice and touched hearts as the kindly, frail workhorse Boxer, and Deborah Staples as the compassionate Clover.  Stewart is so convincing in one shocking scene it’s downright scary.

One cast note of interest to Chicagoans: Melvin Abston, who plays the cruel Napoleon in Animal Farm, has also done voiceover work for various companies and organizations throughout his theatrical career, including The Illinois Lottery.

Powerful and provocative, this production of Animal Farm reminds us all of the amazing things theater can do – and should do – these days.