Dr. Suess’ The Cat in the Hat has gone through many incarnations of late, including a big budget Hollywood film that went a bit astray.   The mischievous Cat that we all wanted to show up at our door to play on a rainy day has gone back to his roots thanks to Katie Mitchell’s lively adaptation for Emerald City Theatre which is currently being remounted at the Broadway Playhouse.

This is children’s theatre at its best and purist.   Spryly directed by Ernie Nolan, this tight and heartfelt production will engage your toddlers from moment the lights go up.   The cast of six is lead by the nimble and confident Danny Taylor, who has an instant connection with his intended audience.   Erik Strebig just about steals the entire show as the puppeteer of Fish, who certainly gets the bad end of the play date with the Cat; while Michael 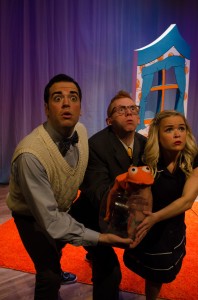 The production runs just over 30 minutes and afterwords, the cast engages their young patrons with a question and answer session.   If that weren’t enough, they meet their fans one by one in the lobby of theatre, giving each new young theatre goer a bit of their time.  That personal engagement is something neither a book or a cartoon can ever match.  The living theatre weaves its magic at the young, who will then become patrons for the rest of their lives.   If anyone doubts the power of children’s theatre, then one just has to see the faces of the impressionable young fans sitting next to our favorite Cat.