Unity in Chicago is pleased to present 1980’s disco legend LINDA CLIFFORD – LIVE IN CONCERT! This one night only event will be held Friday, August 26, 2016 at Unity in Chicago, 1925 W. Thome Ave. in Chicago. The five-time Grammy nominee will perform an evening of hits including “If My Friends Could See Me Now,” “Bridge Over Troubled Water,” “Runaway Love,” Fame’s “Red Light” and other chart-toppers. Tickets are currently available at unitychicago.org, Brown Paper Tickets or by calling (773) 973-0007. 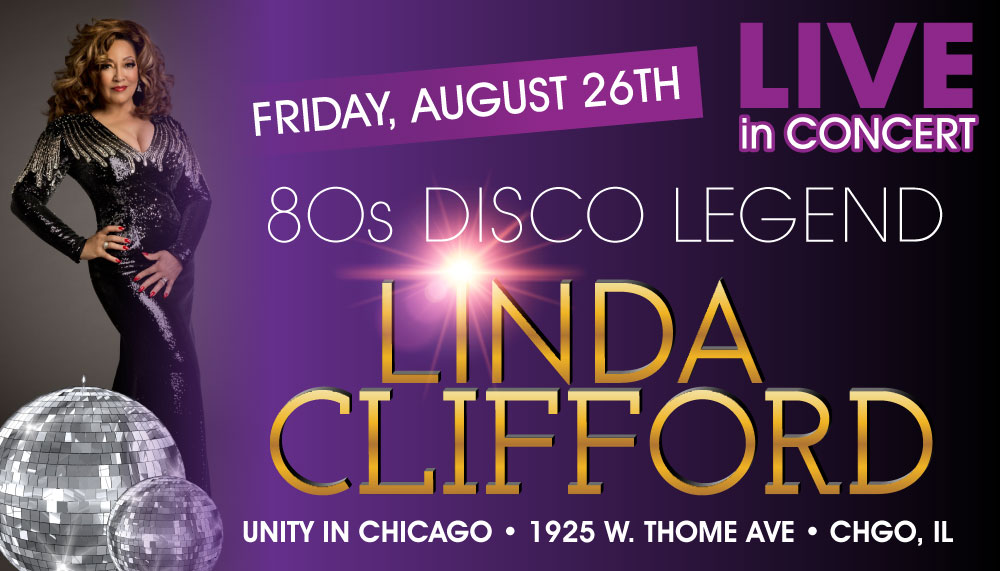 Linda Clifford has made her mark among the classic R&B singers and also as a legendary disco diva. Electrifying audiences with her music and widely celebrated performances, this multi-talented and dynamic entertainer’s accomplishments are vast. Linda’s landmark recordings have spent a total of 60 weeks at #1 on Billboard Magazine’s dance charts, earning Grammy Award and televised performances, Linda has appeared on American Bandstand, Solid Gold, Soul Train, The Midnight Special (including two stints as host), Don Kirchner’s Rock Concert and The Merv Griffin Show. She is an exciting live performer with sold out live concerts around the world including New York’s Lincoln Center. Linda is also an acclaimed songwriter, with her compositions being sought out by Cher and Gladys Knight. She has the distinction of being featured on the Oscar winning #1 motion picture soundtrack album Fame and as an actress, has had roles in such classic films as Sweet Charity with Shirley MacLaine and Roman Polanski’s Rosemary’s Baby with Mia Farrow. For additional information, visit TheLindaClifford.com.